It starts on mobile, and then should make its way to the desktop. 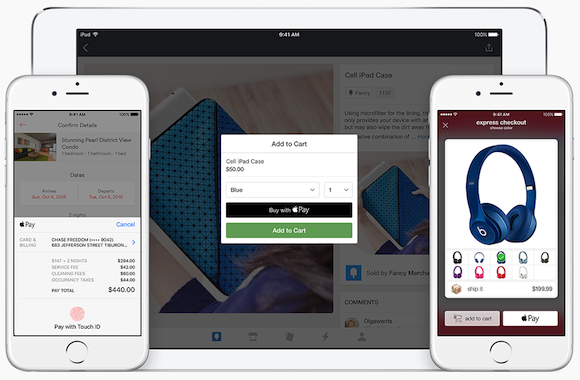 Apple Pay could be heading to the mobile web. Image source: Apple.

I've been asking for this for almost a year. Well, sort of.

While it seems inevitable that Apple (AAPL -1.79%) will eventually bring its Touch ID fingerprint sensor the the Mac one of these days, the most exciting implication of that addition would be the potential for Apple to allow broader e-commerce websites to use Apple Pay. Removing the friction of having to enter in payment credentials on the desktop could be huge and an incredibly seamless experience for consumers. Apple would need to include the Touch ID hardware on its notebooks or sell a separate accessory, while creating a secure framework and API that website developers could tap into.

It seems that Apple is now potentially paving the way for this idea.

Starting on mobile
Re/code reports that Apple is now pitching this idea to potential e-commerce site partners, which would be the first time that Apple Pay would expand beyond retail NFC card readers and in-app purchases. We're talking only about mobile-optimized websites accessed through Safari on iOS, and only if the iPhone or iPad has the Touch ID hardware. The roll out could happen as early as this year, as Apple is supposedly telling partners that it would be ready for the holidays. Apple's Worldwide Developers Conference is coming up in June, which would be the ideal venue to detail an API or software framework for developers to use.

Here's where it gets juicy, though. According to Re/code, "Apple has also considered making the service available on Apple laptops and desktops, too, though it's not clear if the company will launch that capability." Now that would be a game changer for Apple Pay.

Why mobile is so important
It makes a lot of sense to start off on mobile. First off, Touch ID is already on all iPhones shipped since 2013, and a most iPads nowadays. That solves the hardware aspect upfront, so now Apple just needs to get third-party merchant sites onboard. When it comes to e-commerce, mobile has long proven to be an extremely difficult conversion for merchants across the board.

Conversion rates are universally lower on mobile devices, simply because it's a tedious process to enter payment credentials on a mobile device compared to a desktop or laptop. Apple should have no trouble getting merchants onboard, since adopting Apple Pay on mobile sites could yield significant conversion uplifts.

Why the desktop is so important
But desktops are also a massive opportunity, since most people prefer to make online purchases from a desktop or laptop. Again, this is due to less friction with entering payment credentials on a traditional mouse and keyboard. So while there's less need to improve the experience and process, it would still likely be a welcome improvement from the consumer perspective.

The competition
To date, most merchants or payment processors have been limited with how much they can improve the payment process. Amazon.com (AMZN -1.17%) pioneered its 1-Click purchasing method nearly two decades ago, which is exactly what it sounds like: users can purchase with a single click. Amazon even patented and trademarked 1-Click, licensing it to Apple.

Amazon already supports Touch ID for purchases on its mobile app, and most Amazon users probably don't go to the mobile website since its app has been around forever.

PayPal's (PYPL -3.73%) One Touch is similar in that it's designed to reduce the number of steps necessary to complete a payment. Users that activate One Touch will have their payment credentials stored so they don't have to continuously reauthenticate across different sites. Late last year, PayPal said that over half of the top 500 online merchants now offer One Touch.

But the inherent limitation to both 1-Click and One Touch is that they can't quite kill the password off altogether yet. PayPal very much wants to kill the password and is part of the Fast IDentity Online alliance, but the real breakthrough relies on some type of biometric authentication method -- like Touch ID.

Android OEMs have also hopped on to the fingerprint sensor bandwagon, so it's conceivable that mobile passwords are on their way out.