Please ensure Javascript is enabled for purposes of website accessibility
Log In Help Join The Motley Fool
Free Article Join Over 1 Million Premium Members And Get More In-Depth Stock Guidance and Research
By Todd Campbell – Mar 26, 2016 at 9:02AM

Valeant's shares have taken a drubbing, but investors are better off focusing on AstraZeneca's plans to get back on track.

Picking up beaten-up stocks that are trading at a discount to their potential is the hallmark of a buy-low strategy; but not all beaten-up stocks are considered equal. While some companies will undoubtedly succeed in overcoming the obstacles that led to the collapse in their shares, others may never regain their luster. With that backdrop in mind, let's consider the turnaround prospects for AstraZeneca (AZN 0.06%) and Valeant Pharmaceuticals (BHC -2.03%), two companies that are arguably in the bargain bin, and see which of these two companies might be a better buy for value-minded investors.

First, a bit of background
In the past year, AstraZeneca has lost a fifth of its value because of worries that patent expiration will delay its timeline to return to top-line growth. AstraZeneca's sales have been in a tailspin since 2010. Because of patent expiration on some of its best-selling drugs, its revenue has sunk from $33 billion to below $25 billion.

The news has been even worse at Valeant Pharmaceuticals. Valeant has been struggling to repair its credibility since reports emerged that it bought two heart-disease drugs last year, only to increase their prices by fivefold and twofold, respectively. Scrutiny resulting from these price increases led to the discovery of an all-too-cozy relationship with a specialty pharmacy, Philidor -- which was helping Valeant boost sales -- and corresponding discovery of accounting mistakes related to Philidor's business.

In the wake of its struggles, Valeant's C-suite significantly cut its sales outlook last week to between $11 billion and $11.2 billion this year, down from prior expectations for between $12.5 billion and $12.7 billion, an admission that caught investors off guard. Further, delays in the filing of Valeant's financials, resulting from its accounting mistakes, raises the all-too-scary possibility that creditors owed some $30.9 billion could cry default.

Given all that bad news, it's not surprising to find Valeant's shares on the clearance rack. 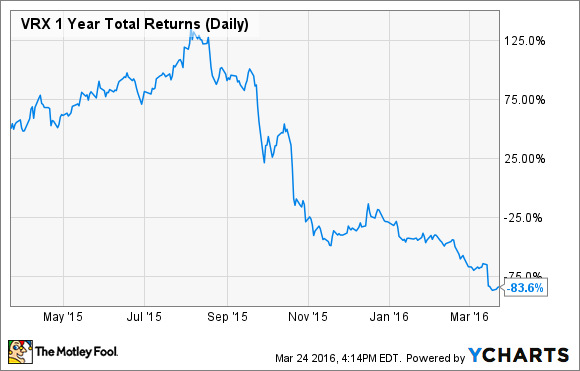 Turning freighters
Problems at both companies can be overcome, but it won't be easy. In 2014, AstraZeneca's board spurned an offer from Pfizer to acquire it for $118 billion Although AstraZeneca's market cap has fallen way below that offer, management has embraced a wave of changes that it hopes will prove its decision was the right one.

Among AstraZeneca's plans are rightsizing its spending on sales, general, and administrative expenses, and launching new drugs to propel sales from their current $24.7 billion pace to at least $45 billion by 2023. So far, AstraZeneca appears to be making progress on its goals.

The company reduced the percentage of revenue its spent on SG&A last year by 1%, or $1 billion, and in the past year, it's won FDA approval of the gout treatment Zurampic and the lung cancer drug Tagrisso. It also continued to build momentum for its heart-disease drug Brilinta, which saw its revenue grow 44%, to $619 million, and its diabetes drug Farxiga, which generated sales of $492 million, up 137% from 2014.

However, there's still plenty of work to do. Even with the benefit of lower costs and new drugs, the company still predicts that sales and profit will slip by single-digit percentages this year. Nevertheless, AstraZeneca's turnaround is miles ahead of Valeant's.

Valeant ended its relationship with Philidor last fall, and that's forced Valeant to the negotiating table with payers who probably aren't too eager to pay top dollar for medications, given Valeant's past behavior. The company also inked a new distribution deal in December to sell certain of its drugs on consignment through Walgreen's Boots Alliance's vast retail footprint, but that effort is still in the early stages. Therefore, it's too soon to determine how quickly it can replace sales lost from fallout tied to Philidor.

Importantly, Valeant only recently decided to replace its long-term CEO, and that means that there's a lot of top-down uncertainty regarding its turnaround strategy. And let's not forget the situation with bondholders. Valeant owes them 22 times more than it has in cash on the books, so if they aren't willing to cut the company some proverbial slack, a cash crunch or asset sale could be on the horizon.

Looking forward
It can be argued that both of these stocks are cheap. AstraZeneca's shares are trading at less than 12 times forward earnings per share, and assuming Valeant's EPS projections hold up, its 2.8 P/E ratio is one of the lowest in healthcare. Of course, that's the rub with buying beaten-up stocks. You never really know whether or not management has a firm-enough grasp on the challenges they're facing to set forecasts that are actually attainable.

Overall, it's AstraZeneca, not Valeant Pharmaceuticals, that I think is the better turnaround story for investors to buy. Because AstraZeneca's already well into its turnaround plan, I can draw a line from where they are today to where they could be in a few years more easily than I can with Valeant.