Halliburton (NYSE:HAL) has encountered new opposition in its bid to close its long delayed merger with rival Baker Hughes (NYSE:BHI). Along with facing stiff regulatory hurdles in an effort to address competitive concerns, now the company is facing a vocal backlash from big oil companies. Both French oil giant Total (NYSE:TOT) and U.S. supermajor Chevron (NYSE:CVX) are now voicing their concerns. This adds even more uncertainty to an already uncertain situation.

Halliburton initially reached an agreement to buy Baker Hughes in late 2014, but the deal has been the subject an intense global regulatory review because it proposes to combine the second and third largest oil-field service companies, which would reduce competition. That's not something that sits well with Total CEO Patrick Pouyanne, who at an industry conference this week said that, "Obviously when you have less competition in service providers, I'm not in favor." He also said that the merger was "not good news" for exploration and production companies because the reduced competition would likely result in higher prices for services.

Total's CEO is not alone in his disdain for the proposed tie-up. Chevron's Brazilian subsidiary has complained to that country's regulator about the proposed merger. According to regulatory filings, Chevron said that the acquisition would reduce the number of large service providers for certain products from three to just two. That could result in higher prices for key products and services in Brazil such as completion tools and cementing services.

A widening gap
At issue, when it comes down to it, is exactly the concern voiced by Chevron. There is no viable No. 4 player on a global scale to fill the role Baker Hughes had served in scores of markets. That equates to less competition for contracts. That's because the fourth largest oil-field service company at the moment, Weatherford (NYSE: WFT), lags behind the group in terms of size while also being weighed down by a weaker balance sheet: 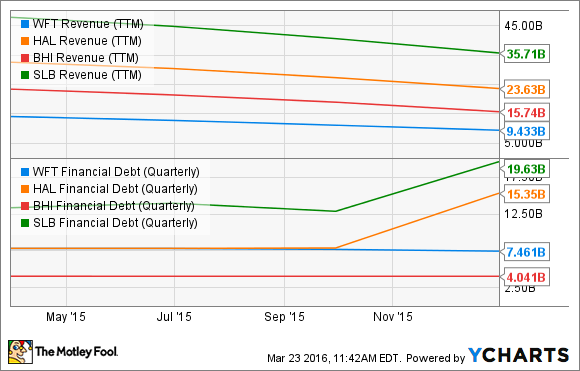 As one can plainly see, Weatherford has generated just $9.4 billion in revenue over the past year compared to a combined $39.4 billion for Halliburton and Baker Hughes. Further, it has $7.4 billion in debt, which is actually just as much as Halliburton had prior to borrowing $7.5 billion to facilitate its merger with Baker Hughes. Even with that debt the combined company would have four times the revenue but only slightly more than double the debt sported by Weatherford. Though it is worth noting that Halliburton and Baker Hughes have proposed to sell a number of assets, such concessions are unlikely to change industry dynamics meaningfully.

It's those proposed asset sales that are seen as the key to this merger being approved. Halliburton has proposed an ever growing list of divestitures that it hopes will appease the concerns of regulators that the deal would stifle competition. However, the problem with these proposals is that Weatherford isn't seen as a likely buyer for these assets, with private equity funds or industrial buyers rumored to be the most likely bidders. As such, the merger has the potential to fragment competition at the bottom so that there would still be no viable third bidder in key markets, which is what has Chevron worried in Brazil.

Investor takeaway
Not only is Halliburton trying to convince regulators that it can combine with Baker Hughes and not stifle competition, but it has to convince its customers that the deal won't increase their costs. Given the comments from Total's CEO and the regulatory filing of Chevron's subsidiary in Brazil, that's going to be a tough sell. Needless to say, with a growing list of customers actively fighting the deal, it will make it much harder for global competition regulators to approve this deal unless a viable third competitor can emerge in these key markets.