New York's public advocate wants the SEC to launch investigations into gun makers for failing to disclose to investors what she asserts is "material risk" information.

Soon after the terrorist attack in San Bernardino, California, that left 14 people dead last year, New York Public Advocate Letitia James urged the Securities and Exchange Commission to launch an investigation into Smith & Wesson Holding (SWBI -10.74%) to ascertain whether the gun manufacturer had misled investors about the reputational risk it faced from the illegal use of its guns. The terrorists had used a Smith & Wesson rifle to commit the assault.

Last month, two New York City detectives were gunned down with a .357 revolver made by Sturm, Ruger (RGR -1.17%) and the state's public advocate is again asking the SEC to investigate.

In her 11-page letter to securities regulators, James argues Ruger has a duty to disclose material information that includes:

She says Rugers are among the most frequently traced "crime guns" by the Bureau of Alcohol, Tobacco, Firearms & Explosives, and the gunmaker's failure to disclose the "grave reputational risk" it faces from such statistics constitutes a violation of securities law.

It's possible an argument could be made that Ruger or Smith & Wesson might come under harsher scrutiny from lawmakers and regulators because of criminals' actions, but that's only because those seeking stricter gun control laws use them as a hammer against the companies. The public at large seemingly doesn't connect criminal acts with the companies that make the weapons used in the crimes.

In fact, it would be more convincing to say the gunmakers' reputations are actually burnished by these events, since both Smith & Wesson and Ruger have experienced explosive sales growth in the wake of horrific events.

In 2012, following the tragic mass shooting of 20 children and six adults at Sandy Hook Elementary School, Smith & Wesson saw a 39% surge in guns sales and Sturm, Ruger's sales soared 52%. In a presidential election year that had already been wracked with harsh political rhetoric over the need for new, stricter gun laws, the gunmakers had already been enjoying white-hot sales growth.

Post-election, waves of civil unrest rocked many urban centers, leaving people to once again turn to the gunmakers for the means by which they could protect themselves. 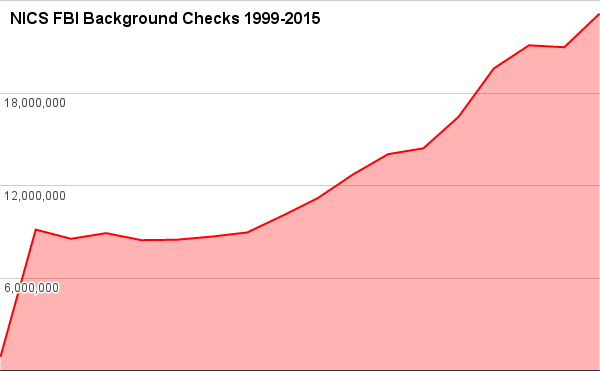 In 2015, the FBI conducted more criminal background checks into people wanting to buy a gun than ever before. The law enforcement agency reviewed the criminal histories of more than 23.1 million individuals, 10% more than in 2014, and it's on track this year to vastly exceed those numbers. In just January and February, FBI background checks are running 42% ahead the same period last year. In fact, for 10 straight months, the agency has conducted more checks each month than it ever has since it started keeping records in the late 1990s.

It's clear the gunmakers have suffered no damage to their reputations as a result of the violence, giving the lie to the New York Public Advocate's claims. To see that her goal is not simply to protect investors but rather is to harass the gunmakers, one need look no further than her attempt to coerce Toronto-Dominion Bank (TD 1.15%) to end its financial backing of Smith & Wesson while urging "all financial institutions to stop bankrolling gun sellers."

In a letter to the bank, James says TD Bank's failure to acquiesce to her demands could have grave consequences for the financial institution's relationship with New York City, specifically calling "millions of dollars in contracts" that could be jeopardized if its judgment on risk-assessment is called into question.

Just as consumers don't blame automakers for crimes committed with their cars, they largely hold Smith & Wesson, Sturm, Ruger, and the rest of the firearms industry blameless when thugs use their guns to carry out a murder. In truth, tens of millions of individuals view the gunmakers as an essential part of protecting their lives and property from those very criminals.

To call for investigations into Smith & Wesson and Sturm, Ruger for risks that do not exist is not public service, but harassment.