Since the end of 2008, The Toronto-Dominion Bank (TD -1.07%) has been one of the very best-performing bank stocks.

The key to this performance is its ability to produce sound fundamental results and leverage that to the benefit of shareholders. Here's how they do it.

First, strong fundamentals from a simple banking business model
TD Bank takes an old-school approach to banking that focuses first on a core business making loans rather than on fee-rich businesses such as investment banking or trading.

As a percentage of total net revenue, TD Bank's fourth quarter saw 61% of revenue come from interest income from lending. That compares with 55% at U.S. Bancorp, another bank with an old-fashioned approach. Citigroup's revenue breaks down similarly to TD's with 62% of net revenue from interest. However, the other three U.S. mega banks have much lower percentages, between 46% and 51%.

Without the benefit of other non-lending sources of revenue, it's imperative that the loan business be rock solid. That means prioritizing credit quality and strictly controlling expenses.

On both accounts TD Bank does an admirable job. In terms of credit quality, TD Bank reported that just 0.41% of its total assets were classified as non-performing. That's about a third less than the industry average. Non-performing assets are comprised as severely delinquent loans plus foreclosures.

In both cases, TD Bank's performance is right in line or better than other banks. The bank's efficiency ratio is impressive, coming in only slightly worse than U.S. Bancorp, a bank considered by many to be the best at cost controls in the industry. Its level of problem assets is consistent with the industry and perfectly acceptable.

Strong fundamentals lead to strong stock performance. That's perfectly logical. But in TD Bank's case there is something else boosting its performance that has nothing to do with its fundamental operations. Compared with other banks, TD Bank has a lot of leverage on its balance sheet, helping to juice its return on equity and take full advantage of its efficient income statement.

Leverage: The difference between average and exceptional returns on equity
When you look at TD Bank's returns relative to its assets, rather than its equity, something unexpected happens. TD Bank's returns don't look quite so impressive. TD Bank's return on assets over the last 12 months was 0.8%, below the industry average 1.1%, U.S. Bancorp's 1.4%, and even below Citigroup's 1%.

The explanation for this discrepancy is, of course, TD Bank's balance sheet leverage. The chart below summarizes the effect, comparing the bank's return on assets, its ratio of total assets to total equity, and the resulting return on equity.

Leverage sounds risky. Should you be concerned?
According to data provided by S&P Capital IQ, the average leverage ratio of a sample of 59 of the largest U.S. banks is 9.2. TD Bank reports the highest ratio of this sample by a wide margin.

This added leverage does add risk to the company's balance sheet. However, in the case of TD Bank, I think the risk is largely mitigated by the company's consistency throughout the credit cycle and its high level of capital as measured by the common equity tier 1 ratio.

Consider this chart of total assets relative to shareholder equity from just before the financial crisis to today. 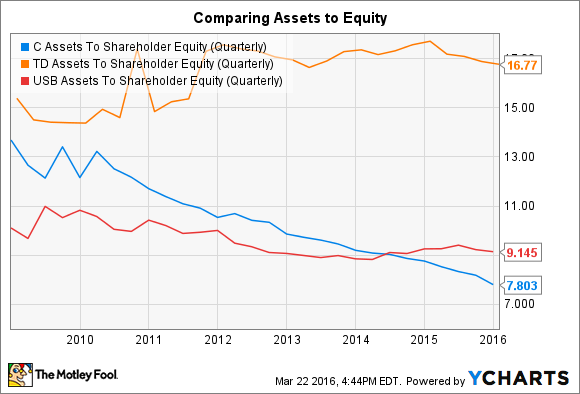 All banks saw a general deleveraging after the crisis, driven by lower risk appetites and new regulatory requirements. However, among these three banks only Citigroup saw the rapid rise and subsequent fall in leverage. U.S. Bancorp and TD Bank each have more or less maintained the same leverage philosophy over the entire period. Big, fast changes are scary for bank stocks. Consistency in booms and busts is much more palatable. It's no coincidence that the two steady and predictable banks shown also have the better stock performance.

Beyond the company's track record, investors should find comfort in TD Bank's 9.9% common equity tier 1 ratio. This ratio measures the relative level of extremely safe capital on the bank's books compared to its assets. By this measure, TD Bank's capital should be considered quite strong and more than adequate. At 9.9%, TD Bank is well above regulatory requirements and in line with other large, fundamentally sound North American banks.

Taken altogether, TD Bank is relatively simple bank that prioritizes making sound loans to creditworthy borrowers. It's efficient, it's profitable, and it produces strong returns on equity. Yes, the bank does have a bit of leverage on its books, but the market doesn't mind, and I don't think you should either.

Here's Why Toronto-Dominion Bank Can Keep Raising Its Dividend

Why I'm in No Hurry to Buy Citigroup Stock

My Top Bank Stock to Buy and Hold Forever