Under Armour (NYSE:UAA) gets a lot of press as the new(er) athletic apparel company on the block, but Nike's (NYSE:NKE) third-quarter results show how its growth story is far from over. Success in China and Japan, and with its capital allocation plan, leaves Nike in a strong position and gives Under Armour shareholders a possible glimpse into the bright future of their company.

China
"China" has been a synonym for "huge international growth opportunity" for as long as I can remember. The population size and growing middle class made its rise to economic superpower status seem inevitable. Now we're seeing this promise turn into profits for a wide range of consumer brands.

Nike grew revenue 23% in China in the third quarter. The region should overtake Western Europe, which currently generates about 50% more revenue but is growing much slower, sooner rather than later. Exluding currency effects, footwear sales were up 10% in Western Europe compared with 33% in China. High-margin basketball and running shoes, including the Jordan brand, helped to lift China into the No. 2 slot for earnings by region.

A few more years of 40%-plus earnings growth and North America might lose its spot as Nike's most important region. China's becoming the biggest contributor to earnings even while North America continues to show high-single-digit growth shows the tremendous opportunity available in the Middle Kingdom. Under Armour currently generates only about 13% of its revenue from outside North America. Seeing Nike's success internationally over the past few decades should excite Under Armour shareholders. Not only does the company have a long way to go to catch up to where Nike is today, but it also has decades of growth ahead of it once it gets there.

Japan
I remember a book from my childhood that had 30 compartments approximately the size of pennies. On the first day of the month you put one penny in the first slot. On the second day you put in two pennies, doubling each day, until you got to day 30. At this point you were a millionaire -- many times over, in fact. Whether this was a genius way to teach children about compound interest or just a way to make a quick buck, it shows that even a small number, if growing fast enough, can become huge in a hurry.

SAVE ENOUGH OF THESE, OR JUST BUY NIKE STOCK AND HOLD ON. IMAGE SOURCE: PIXABAY.

Earnings from Japan are not doubling every year for Nike, but it has been the fastest growing region. For the quarter, earnings rose 64% to $36 million. The second smallest contributor, Central and Eastern Europe, rose 33% to $69 million. Japan is an interesting parallel to China. China is the future of the company, while Japan will probably remain the last or second to last region in terms of importance. The growth in futures orders for the two Asian countries, excluding currency effects, are the highest at 36% (China) and 24% (Japan). Japan wasn't mentioned once on the earnings conference call but should soon be contributing hundreds of millions of dollars to Nike's bottom line.

Capital allocation
During the third quarter, Nike wrapped up a four-year, $8 billion share repurchase plan that was authorized in 2012. The average price for repurchased shares was $40.58, and Nike currently trades north of $60. Shareholders have already benefited from these buybacks, and the decision will look even more prudent as the share price moves even higher over the years to come.

A four-year, $12 billion plan kicked in this quarter as well. This plan is 50% larger than the previous one, and Nike is more than twice the size, by market capitalization, than it was in 2012. All of the organic growth, from China and elsewhere, is the engine that drives the company, but efficient capital allocation has a huge impact on per-share returns. These repurchases, combined with a growing dividend (around 1%), show how a more mature company can use its excess cash to improve shareholder returns. Earnings per share should outpace overall earnings growth over the next four years as buybacks continue to work their magic. 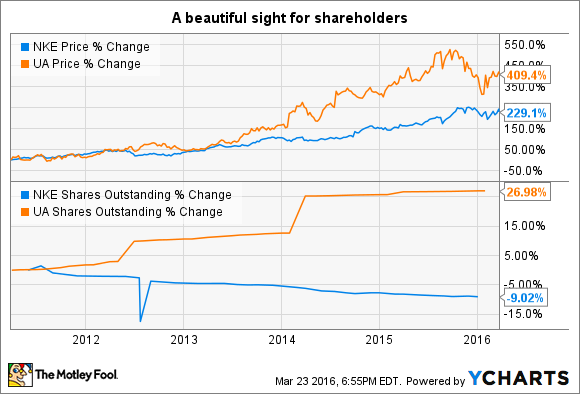 Under Armour has increased its outstanding share count by over 25% over the past five years. Stock-based compensation and capital raises have diluted existing shareholders. You don't mind some dilution when your shares are up fivefold over five years, but this dilution will end eventually. When there are fewer growth opportunities for Under Armour to gobble up, it will announce a dividend, beef up its share repurchase program, or both.

Nike continues to astound and its success makes me even more confident in Under Armour's long-term future. I plan to hold my shares in both companies for decades and recommend taking a look to see how they might fit in your portfolio.