These companies are worthy of long-term investors' attention.

Though it's undeniably gratifying to watch any stock you own skyrocket in value over short periods of time, the best way to predictably generate wealth is to buy and hold shares of great companies over the long term. And we're not talking periods of just weeks or months, but rather years or -- better yet -- decades. So we asked five Motley Fool contributors to offer one stock they think investors would be wise to buy now and hold for the next 20 years. Read on to see which companies they chose and why.

Dan Caplinger: One stock that I've gotten more excited about over time is Starbucks (SBUX 1.15%). The coffee giant has become a mature player in the U.S. market, leading some to conclude that its highest-growth days are over. Yet the company has a huge opportunity internationally, where it can take advantage of its status as a representative of American culture to draw in aspirational customers who are new to the middle class.

The fits and starts of emerging-market growth haven't always worked in Starbucks' favor, and that's why having a long time horizon is crucial in holding this stock. For instance, in the financial crisis in 2008, investors began to doubt whether cash-strapped consumers would continue to pay for high-priced coffee drinks in a tough economic environment. The answer to that question turned out to be yes, but investors had to endure gut-wrenching losses while they waited for that answer.

Over time, CEO Howard Schultz and his team have shown time and time again that Starbucks has its finger on the pulse of a key niche in the food and beverage industry. That's why it would make a good pick for a long-term investor who can afford to wait for top returns.

Sean Williams: When I think of stocks that you can set and forget for decades at a time, payment processing facilitator Visa (V) is often one of the first to jump to the forefront. Two factors in particular make it an intriguing growth opportunity over the long run.

First, the prevalence of plastic is still just hitting the tip of the iceberg on a global scale. Roughly six-in-seven global transactions are still being conducted in cash, especially in Southeastern Asia, the Middle East, and Africa, which are three potential hotbeds of growth for Visa. Of course, laying the infrastructure and partnering with merchants in these regions isn't going to happen overnight. Thus, investors can likely expect a slow but steady high-single-digit percentage top- and bottom-line expansion from Visa for many years to come.

Additionally, Visa has resisted the urge to also become a lender like some of its peers. Although lending allows select payment processors to double-dip by reaping the rewards of interest on loans and fees from merchant transactions, lenders are also exposed to periods of economic weakness via delinquencies and loan charge-offs. Visa isn't exposed to either of these, and it only struggles if there's a pretty substantive decline in global growth. Considering that Visa has its fingers in so many countries, it's unlikely that the company would feel the downside pressure felt by most financial stocks.

Visa also has quite the opportunity to increase its dividend payment over time. Currently paying $0.56 annually, Visa is pacing to well over $4 in EPS by fiscal 2019. Visa could easily transform into a dividend juggernaut, and as such is a name I'd suggest investors consider buying and holding for 20 years (or longer).

George Budwell: Ionis Pharmaceuticals (IONS -1.45%) looks, to me, like a great name to hold onto for an extended period of time. Even though Ionis sports one of the deepest and most diversified clinical pipelines in the entire pharma industry right now, the drugmaker's market cap presently stands at a mere $4.8 billion. That's nothing for a company that could very well bring multiple blockbuster products to market within the next four to five years, implying that it's grossly undervalued at current levels.

Having said that, Ionis' somewhat strange valuation does have a basis in reality. After all, Ionis' drug development platform is built on antisense technology, which still has a ways to go in terms of being validated from both a scientific and commercial viewpoint. The good news is that Ionis has put a tremendous amount of effort into developing the next generation of antisense drugs that are expected to be more potent and safer than their predecessors.

Looking ahead, Ionis is on track to start releasing pivotal-stage data for its next generation of antisense drugs -- such as IONIS-TTRRx for Familial Amyloid Polyneuropathy -- over the next two to three years. And if Ionis has indeed solved the outstanding issues that have slowed the development of antisense drugs in general, its shares should rise accordingly -- possibly even transforming the company into a large-cap biotech over the next two decades.

Steve Symington: Perhaps it's the inner wings, beer, and sports fan compelling me, but I think investors would do well to buy and hold Buffalo Wild Wings (BWLD) stock for the next two decades. As it stands, Buffalo Wild Wings shares have fallen more than 20% over the past six months, in part as the company works to digest last year's enormous $160 million acquisition of 41 franchised locations to bring them back into the company-owned fold, and most recently as the company turned in weaker-than-expected same-store sales growth in the fourth quarter.

However, B-Dubs' same-store sales growth still managed to outpace the broader casual dining industry. And the company managed to reduce both cost of labor and cost of sales while simultaneously repurchasing shares under a $200 million buyback authorization approved by its board this past November. What's more, investors seem to have lost sight of Buffalo Wild Wings' long-term goal of nearly tripling its current restaurant unit base to 3,000 locations worldwide. That plan includes growing its North American base of flagship restaurants by around 50%, to 1,700 units, over the next decade, as well as expanding its diversified restaurant concepts to as many as five new brands in addition to "just" its currently owned Buffalo Wild Wings, R Taco, and PizzaRev chains. For investors willing to buy and hold shares of Buffalo Wild Wings as it implements its lofty ambitions in the coming years, I think shares at today's levels are a mouthwatering bargain.

Daniel Miller: Picking stocks to buy and hold for 20 years can be frightening. Blockbuster was a no-brainer investment, until it wasn't -- and that happened practically overnight. The same goes for countless other businesses that will inevitably be disrupted by new technology. However, what I can guarantee you is that there will always be goods needing to be transported across America, and the newest popular phone app or streaming service won't make railroads obsolete. For that reason, my pick is Union Pacific Corporation (UNP -0.69%).

Sure, 2015 wasn't great for railroads and this year will likely be another rough year for revenue and earnings, but Union Pacific continues to improve its operations and return value to shareholders. The railroad managed to improve its core price during the fourth quarter by 3.5% despite fewer carloads. And, despite the operating ratio moving higher in the fourth quarter compared to the prior year (that's a bad thing), Union Pacific still managed to set a full-year record low operating ratio of 63.1%. Management plans to keep improving the operating ratio and maintained its target to reach 60% by 2019.

Also, when looking at a two-decade horizon for holding a stock, you'll want to pick a company with a track record of dishing consistent dividends to investors and buying shares back. Union Pacific has done this extremely well over the past decade, and will likely continue to do so. 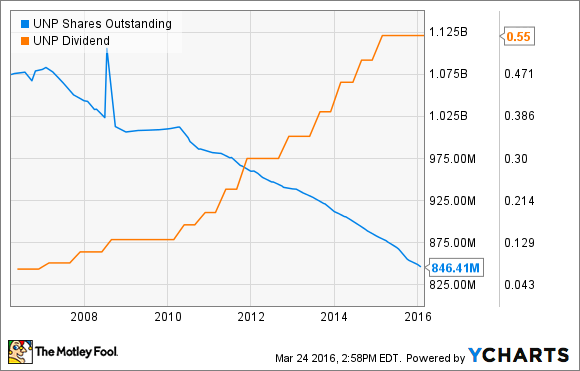 Put another way, over the past decade Union Pacific has grown its dividend by 633% all while slashing its outstanding share count by 21% -- pretty impressive. Ultimately, railroads are less expensive for long distances and are 4 times more fuel-efficient per ton-mile shipped, according to Morningstar.com, which will ensure railroads like Union Pacific are a great choice for investors with a 20-year time horizon.