Please ensure Javascript is enabled for purposes of website accessibility
Log In Help Join The Motley Fool
Free Article Join Over 1 Million Premium Members And Get More In-Depth Stock Guidance and Research
By Todd Campbell - Mar 28, 2016 at 7:21AM

Despite AstraZeneca's strategy to return to growth, income investors may still want to focus their attention on AbbVie.

Dividend-paying companies have been shown to outperform their non-dividend-paying counterparts, so it's little surprise that more investors are focusing on dividend investment strategies. One strategy that's gained traction with investors is buying dividend growth companies, or companies that have a track record of boosting their annual dividend payment.

Although there are many dividend-paying companies investors can buy, let's begin by considering whether AstraZeneca (AZN 3.80%) or AbbVie Inc. (ABBV 1.93%) is a better bet to deliver dividend growth to investors in the future.

Past as prelude
Investors can gain insight into management's commitment to their dividend by looking at how much the C-suite has returned to investors in dividends in the past.

Companies that are the most shareholder friendly tend to increase their dividend -- even if slightly year after year. A track record of increases can also offer clues to how confident management is about future revenue and profit opportunities.

In the case of these two stocks, history offers some mixed messages.

AstraZeneca's dividend payment increased steadily between 2005 and 2013, but it's flat-lined ever since. Why? Because a string of painful patent expirations has resulted in a sales slump from a peak of $33 billion to less than $25 billion last year.

AbbVie was spun out of Abbott Labs in 2013, so its dividend history has to be taken with a grain of salt. Nevertheless, AbbVie's annual dividend has grown 42% since its separation from Abbott Labs, and AbbVie inherited Abbott Labs' pedigree as a member of the S&P Dividend Aristocrats Index, an index composed of companies that have bumped up their dividend for at least 25 consecutive years. 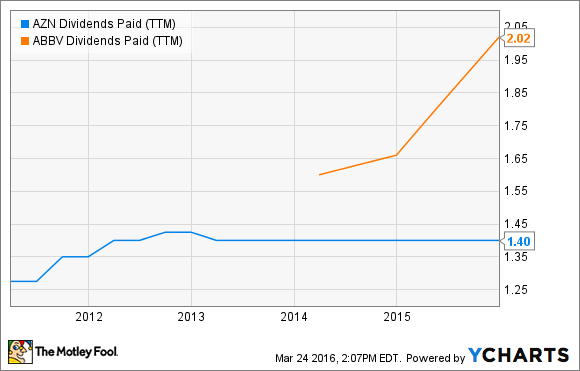 Shifting tides
While AstraZeneca's dividend payout hasn't budged over the past few years, there's a chance that the company could begin to increase it again in the future, and if so, then it could become a good option for dividend growth investors.

Following Pfizer's now-failed attempt to acquire it in 2014, AstraZeneca has outlined an aggressive strategy that includes returning to top-line growth and cutting costs to boost profitability. As a result, AstraZeneca projects that its revenue could climb from $24.7 billion last year to $45 billion by 2023.

That's a pretty remarkable forecast, given that sales of top-seller Nexium slipped 26% to $2.5 billion last year following the loss of patent protection in the U.S., and sales of its $5 billion megablockbuster cholesterol-busting drug Crestor will undeniably sink when it loses patent protection this year.

Clearly, management is confident that a slate of recently and soon-to-launch drugs can more than make up for the patent headwinds. Last year, sales of its heart disease drug Brilinta surged 44% to $619 million, and revenue from its diabetes drug Farxiga climbed 137% to $492 million.

The company's recent launch of the lung cancer drug Tagrisso is off to a quick start, hauling in $19 million between its November launch and year-end, and its ovarian cancer drug Lynparza brought in $95 million in its first year on the market. Overall, AstraZeneca believes that these and other cancer drugs in development, including its PD-L1 durvalumab, could be the backbone for its revenue growth over the coming years.

While AstraZeneca is attempting to kick-start itself back into a growth story, AbbVie is working hard to sidestep a big threat.

In December, the composition-of-matter patent protecting its $14 billion-per-year autoimmune disease drug Humira will expire. That expiration could have dire consequences on AbbVie, because Humira represents 60% of its revenue.

Yet management appears unfazed by the risk to its best-seller. In January, it outlined a long-term forecast that includes growing, rather than shrinking, sales of Humira, to $18 billion in 2020. That optimism is based on an assumption that methods-of-use patents can hold off generic competition until the early 2020s. If so, then AbbVie should have a few more years of top-line growth that can fuel additional dividend increases. If not, then AbbVie could find itself in the same position AstraZeneca was a few years ago, when it was forced to stop increasing its dividend.

However, even if Humira does face generic competition sooner than management hopes, it may not mean AbbVie's dividend can't keep growing. If AbbVie can continue to grow demand for its blood cancer drug Imbruvica and its hepatitis C drugs, and launch a Humira successor, then it might not see sales suffer as much as they might otherwise.

Looking ahead
A turnaround is in progress at AstraZeneca that could turn it into an attractive stock for dividend growth, but until that turnaround pays off with significant top- and bottom-line growth, it remains AbbVie that's the better dividend growth bet. Yes, AbbVie's got a big risk ahead of it with Humira, but it may be able to delay and eventually sidestep that threat via other fast-growing drugs, and if so, then its recent pace of dividend increases may continue for years to come.