Costco is reducing cigarette sales. CVS dumped tobacco altogether. What can investors learn from these decisions?

COSTCO DOESN'T NEED CIGARETTES TO GET CUSTOMERS INTO ITS STORES. IMAGE SOURCE: COSTCO.

The tobacco industry in the U.S. has withstood decades of lawsuits, health labeling requirements, and changing consumer preferences. Its biggest player, Altria (MO 1.29%), is the best performing stock of the past 50 years, but two companies -- CVS Health (CVS 1.15%) and Costco Wholesale (COST 0.43%) -- have eliminated or are phasing out tobacco products from their stores. The reasons that each has for doing so sheds an interesting light on what makes their respective businesses tick.

CVS focuses on health
CVS eliminated tobacco products from its stores in September 2014. It was a bit counterintuitive for a company in the business of improving the health of its customers to actively sell a product that leads to more than 480,000 annual deaths in the U.S. alone. Management willingly cut off an estimated $2 billion annual revenue stream in the hopes that an improved focus on health would strengthen the CVS Health brand and increase long-term profitability.

Annual revenue has risen 10% since 2014 to over $153 billion, while EPS is up 17% over that period. CVS is chugging along in its post-tobacco world and doesn't seem to miss the $2 billion in lost sales. Management made a decision that dropping tobacco would deliver more value to shareholders in the long run than the annual sales from keeping it in stores. This was not a decision predicated solely on social responsibility, but it had the added benefit of making the country a little healthier.

Costco has different priorities
Costco is in the process of phasing out tobacco sales at many of its locations. Its reasons for doing so don't mirror CVS's. Costco operates on razor-thin margins (no item is ever marked up by more than 15%), is always on the lookout for new products to sell in its warehouses, and is willing to drop inventory if its terms aren't met. Costco derives nearly all of its operating income from membership fees. The products in the warehouses are there to get people to sign up for, and renew, their memberships.

Cigarettes are a low-margin business, for retailers, and most of the value comes from the additional purchases a smoker might make while buying a pack. A consumer might buy cigarettes in a convenience store and grab a few slices of pizza and a fountain drink, which both sport fantastic margins. Costco doesn't have the problem of needing to drive traffic to its warehouses. Low margins and high levels of theft have convinced management that it just doesn't make business sense to sell cigarettes at all of its stores.

Costco has a lot of business members who own convenience stores. If they aren't able to purchase cigarettes, Costco might lose out on thousands of dollars of other sales. Frequent purchases of cleaning supplies, paper products, drinks, and the like might shift to a competitor such as Sam's Club, which continues to sell cigarettes. This is one reason Costco hasn't taken a global stand against cigarettes in its warehouses.

The future for these companies 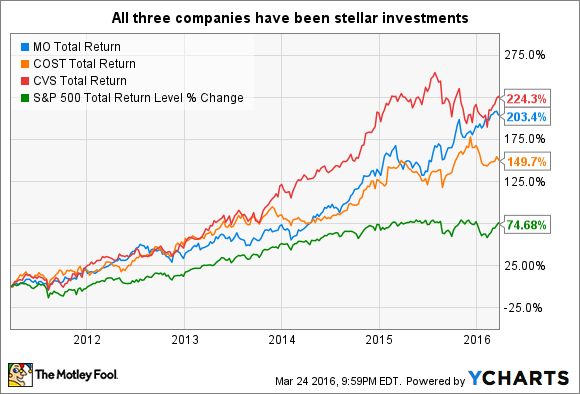 While CVS took a more pronounced stand against tobacco sales than Costco, neither company modified its behavior for altruistic reasons. This isn't a bad thing. It's an example of a positive outcome -- less availability of cigarettes and hopefully less smokers -- coming from a desire to maximize profits.

If I were a CVS shareholder, I would be happy that management is so focused on its core competency. Judging all future decisions through the "does this fit CVS Health" lens should keep the company on message and benefit shareholders for the long term. While not as insidious as cigarettes, junk food and soda, which are still sold at CVS locations, are contributing to an obesity epidemic in the country, and I would not be surprised to see CVS address this in the future. Its brand should be synonymous with health, which will differentiate CVS from its many competitors.

Costco is one of my largest holdings, and I love to see management continually examining whether a product deserves to be sold in its stores. Inertia is a powerful force in business, and it would be easy to say, "We sell cigarettes because we always have and they're a reliable revenue source." Costco beats the pants off other retailers because it doesn't operate this way. I expect it to continue to perform admirably as a stock because the underlying business is so strong.

I don't own Altria, but it might prove to be a solid investment, even accounting for the continuing decline in cigarette sales. It still generates a ton of cash and pays a healthy (pun intended) dividend north of 3.5%. If concerns that companies such as CVS and Costco will drop tobacco causes share prices to fall and the P/E ratio to contract, dividend reinvestment and time could lead to excellent returns. The company is still likely to sell tens of billions of dollars of product annually for many years, which should keep the dividend safe. Innovation with smoke alternatives or the national legalization of marijuana could eventually provide another catalyst as well.

How Good Are You at Guessing a Company's Market Cap?

Beat the Bear Market With These 3 Warren Buffett Stocks