Examining the prospects for the durable refuse handler's stock price.

Professional garbage hauler Waste Management (WM 0.45%) is by far the top dog in its industry, leading the rest of the pack in terms of customer base and revenue. It's also a very popular stock, notching new peaks in its share price recently.

This, of course, leads to a big concern: No matter the company's underlying performance, if it's climbed so high, could it be primed for a fall? Let's take a closer look at Waste Management to gauge whether its stock is more likely to rise or crash in the near future.

Spend and throw away
America is the land of consumption: We love to buy and use stuff. It follows that we're also the land of garbage once we unpack, throw away, and eventually discard what we've so eagerly acquired.

Waste Management has been helping dispose of this since 1968, growing into a company with over 21 million customers. Its services reach into every conceivable corner of the disposal industry, including hazardous waste and recycling.

It's a sturdy and reliable company engaged in an activity that will always have plenty of demand. These days, annual revenue comes just shy of the $13 billion mark, while fiscal 2015's per-share adjusted net profit was $2.61.

Although the latter represented year-over-year growth of 13%, the top-line figure declined by 7%. Waste Management was hurt by the decline in commodity prices, which affects its revenue from recycling. The drop in the crude oil price also hit the company since it took in less from fuel surcharges.

Regardless, the company is still well profitable, and it looks like earnings will rise this year. It's guiding for an adjusted EPS of $2.74 to $2.79 for 2016, more or less what analysts are expecting, too. Even at the low end of that range, Waste Management will improve its profitability by 5% -- not at all bad for a sprawling incumbent.

Another man's treasure
Barring a serious economic depression, the prospect of which is highly unlikely anytime soon, Americans are probably never going to curb their desire to consume. Even if the economy does crater, we'll still need help carting our refuse away -- after all, in our most recent recession, garbage haulers were profitable, in sharp contrast to certain other businesses.

This is a profitable line of work that throws off cash. Here's a look at the development of the bottom line and free cash flow over the last decade for Waste Management and smaller industry rivals Republic Services (RSG 0.33%) and Waste Connections (WCN -0.38%). 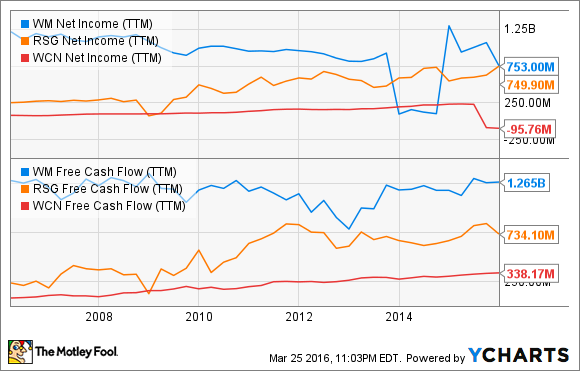 Net income has been almost entirely in the black for all three over those years -- save for Waste Connections' nearly $100 million deficit last fiscal year -- with FCF generation being robust and strong.

That ability to produce cash gives plenty of scope for stock price-boosting measures such as share buybacks and dividends. All three companies engage in both, with Waste Management -- no surprise -- leading the charge on the latter. For 13 years in a row, it's raised its quarterly dividend, which now amounts to $0.41 per share.

This yields 2.8% on the most recent closing stock price, which trumps Republic Services' 2.5% and is well ahead of Waste Connections' 0.9%.

Not a garbage stock
Waste Management looks like a very secure company to own. It operates in a business where demand is likely to remain strong, so its fundamentals should continue to be solid. It also pumps out plenty of cash to support its rising dividend.

I believe those two factors will combine to keep the stock's popularity growing among investors, no matter how high the share price has already risen. I'd put money on said price breaking through its ceiling and continuing its upward trajectory -- this company is very much a swimmer and not a sinker, in my opinion.

Eric Volkman has no position in any stocks mentioned. The Motley Fool owns shares of Waste Management, and recommends Republic Services. We Fools may not all hold the same opinions, but we all believe that considering a diverse range of insights makes us better investors. The Motley Fool has a disclosure policy.

Recession or Not, This Aspiring Dividend Aristocrat Continues to Put Up Monster Results
370%