Please ensure Javascript is enabled for purposes of website accessibility
Log In Help Join The Motley Fool
Free Article Join Over 1 Million Premium Members And Get More In-Depth Stock Guidance and Research
By Brian Feroldi, Keith Speights, and Cory Renauer – Mar 29, 2016 at 9:04AM

Looking for a biotech stock that doesn't require constant monitoring? Our contributors suggest that you take a closer look at these three stocks.

Biotech stocks tend to be a risky breed. The sector is packed with companies that don't even generate revenue, let alone profits. That causes the sector to have much higher volatility than average, which makes some investors feel as if they can't put money to work in the space without having to constantly monitor their positions.

However, just because the sector tends to be dynamic doesn't mean every biotech stock is equal. There are several companies in the space that are diversified enough that you can safely invest in them without having to follow their every move.

With that in mind, we asked our team of healthcare contributors to share a biotech stock that they feel doesn't require babysitting.

Brian Feroldi: While many biotechs have nearly all of their value tied to the prospects of a single drug, biotech giant Amgen (AMGN 0.12%) is in no such position. Amgen boasts a portfolio of products that on are the market producing revenue, which means investors who own this stock don't have to worry if one of them turns out to be a bust.

Amgen's product lineup includes two drugs that pull in a more than $1 billion in sales each quarter -- Neulasta, which boosts a patient's white blood cell count, and Enbrel, which treats rheumatoid arthritis. While both of these blockbusters could face biosimilar competition in the future, Amgen is already generating meaningful revenue from its crop of newer drugs that will help to pick up the slack.

Another long-term growth avenue for the company is the biosimilar market. Amgen has nine biosimilar drugs in its pipeline, and one of them -- ABP 501 -- is a clinical equivalent to Humira, the world's best-selling drug. All told, Amgen believes that its biosimilar lineup could one day bring in roughly $3 billion in annual revenue.

Yet despite its huge profitability and deep portfolio of products, investors interested in Amgen's stock look to be getting quite a deal. Shares are currently trading for around 14 times 2016 profit estimates, and the company offers up a 2.75% dividend yield. That's a compelling combination for a company that has the potential to grow, so biotech investors who want a company that won't keep them up at night should give Amgen a closer look.

Cory Renauer: In an interview shortly before his death, legendary investor Benjamin Graham expressed a disdain for widespread use of the P/E ratio as opposed to its inverse, the earnings yield, which is calculated by dividing trailing EPS by share price. It's been 40 years since that interview, and the P/E ratio is as popular as ever, but I consider Gilead Sciences (GILD 0.98%) a biotech you don't need to babysit based on what Graham considered a "more scientific" approach. 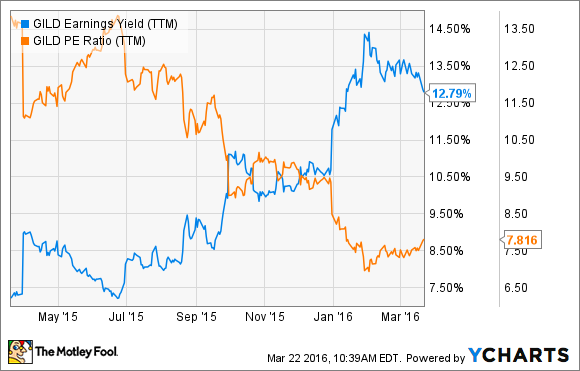 With an earnings yield of nearly 13%, Gilead has a bottom line that could remain flat into eternity, and the stock would still outperform the S&P 500's 10% historical return. Given the existing, and possibly increasing, demand for hepatitis C treatments, combined with Gilead's dominant position in this space, achieving flat to modest bottom-line growth in the years ahead should be a doddle.

Of course, Gilead could begin throwing money at overvalued companies and assets, but I doubt this will happen. While the rest of the industry was caught up in an M&A frenzy last year, Gilead Sciences' CEO at the time, John Martin, took a lot of heat by not following the trend. Now that both the iShares Nasdaq Biotechnology and SPDR S&P Pharmaceuticals indexes have lost roughly one-third of their value since their lofty peaks over the summer, his patience has already been vindicated. As executive chairman, Martin is likely to continue to steer management in whatever direction provides the best returns possible for its shareholders.

In the years ahead, Gilead will begin making acquisitions again, but not until risk-adjusted returns of available assets far outweigh its own shares. That takes guts and makes this a biotech you can confidently hold for the long run.

Keith Speights: I've owned some stocks that I felt I needed to watch like a hawk to make sure they didn't get into trouble. But that's never been the case with Celgene (CELG) since I bought shares of the biotech several years ago. Celgene is definitely a stock for which no babysitting is required.

One powerhouse drug has been the key to Celgene's success: Revlimid. Celgene made $5.8 billion from Revlimid in 2015, nearly 17% higher than the prior year. Momentum for the blood cancer drug seems likely to continue this year. Celgene expects Revlimid's 2016 sales to top $6.6 billion.

Even better, two other drugs in Celgene's lineup appear to be surefire blockbusters this year. Cancer drug Abraxane and multiple myeoloma drug Pomalyst both came tantalizingly close to the billion-dollar mark for sales in 2015. Celgene also has another rising star in Otezla, an oral medication that's used to treat plaque psoriasis and psoriatic arthritis.

Unlike some biotech stocks with sky-high valuations and little or no earnings, Celgene claims a reassuring price tag: Its forward earnings multiple is less than 14. And when you factor in that Celgene's earnings should grow well over 20% annually for the next several years, the stock looks like a bargain. In my view, Celgene is unlikely to keep you up at night or potentially make a mess with your portfolio.