The gold stock is already up sharply over the past year, and it could have more room to run.

Unlike most other gold mining stocks over the past five years, Randgold Resources (NASDAQ: GOLD) has actually outperformed the price of gold: 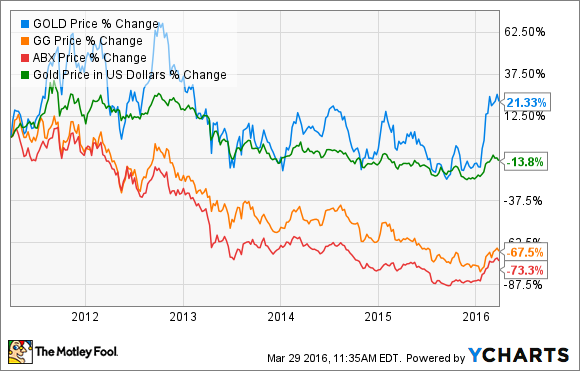 As that chart notes, the double-digit slide in the price of gold over the past five years has eroded significant value away from investors in leading gold miners Goldcorp (GG) and Barrick Gold (GOLD -0.64%). Randgold Resources, on the other hand, has performed exponentially better due to its focus on exploration over acquisitions as well as its ability to keep costs in check, enabling it to avoid the multibillion-dollar impairment charges Goldcorp and Barrick Gold have taken over the past few years.

Randgold Resources' outperformance might not be over; there are three catalysts on the horizon that could cause this gold stock to soar.

1. Gold prices continue to rise
The price of gold has risen sharply to start the year, up nearly 15% in part because of the belief that inflation could be on the rise. A number of data points suggest inflation is starting to show up in parts of the U.S. economy. Home prices, for example, were up 5.4% over the past 12 months ending in January, according to the S&P/Case-Shiller Home Price Index, which is even higher than the 5.3% annual pace seen in December.

However, despite noticeable data hinting at a pickup in inflation, the Federal Reserve has been suggesting that it will slow the pace of interest rate increases. This has the potential to drive gold even higher, because higher interest rates are a weight on gold since it doesn't pay its holders any interest. Given that the 15% rise in the price of gold this year has already driven Randgold's stock price up 45%, along with 37% and 85% increases in the stock prices of Goldcorp and Barrick Gold, respectively, its continued rise would likely push gold stocks even higher.

2. An M&A announcement in the gold mining sector
According to a report by Bloomberg earlier this year, 2016 could mark a once-in-a-generation opportunity for gold mining M&A. In particular, African-based gold mining companies are on the prowl for acquisitions because the drop in the South African rand is boosting their profits given that they pay costs in local currencies, but sell gold in dollars.

Johannesburg-based Harmony Gold Mining (HMY -2.76%), for example, said it was seeking acquisitions after its profits rose thanks to a plunging rand. In particular, Harmony Gold Mining is looking in its existing locations of sub-Saharan Africa and Papua New Guinea for deals. Should a company like Harmony Gold Mining make a major acquisition announcement, it could lift the entire sector, fueling speculation that an M&A boom is about to be unleashed.

3. It's exploration program hits pay dirt
While a lot of its peers focus on acquisitions to drive growth, Randgold's focus is on exploration. It has a remarkable track record of success in creating real value by discovering and then developing new resources. It's already looking for its next big discovery; CEO Mark Bristow noted last quarter:

Our exploration teams are not only replenishing the ounces we mine but are making significant progress in the hunt for our next big discovery. And when they find it, we can afford to build our next new mine without recourse to the market, thanks to our robust balance sheet.

As the map below notes, the company is really leaving no stone unturned in its search for resources across Africa. 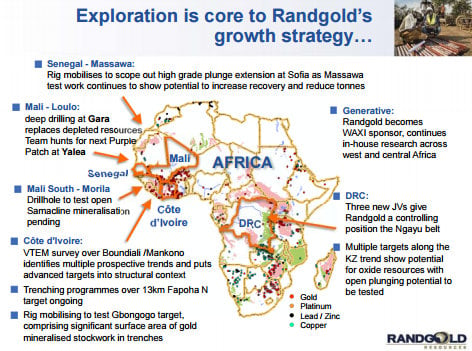 Should one of these exploration projects turn into a significant discovery, it could drive the stock higher given that exploration is the lifeblood of this company, and it has created substantial value for investors in the past. In fact, the stock is up more than 9,000% since it went public because of its successful exploration efforts.

Investor takeaway
Like most other gold producers, Randgold's stock price will soar if gold continues to rally. However, it has done a much better job outperforming that metal's price by focusing on exploration instead of messing with costly acquisitions. Because of that, another major discovery could boost its fortunes given its history of turning these gold mines into, well, gold mines. Further, should its competitors get antsy and start buying up rivals, it could send the whole sector higher. Needless to say, there are quite a number of catalysts that could send Randgold's stock soaring.