Management is still confident, but the future rate of dividend increases will likely disappoint compared to historical results.

The management team at Enbridge (NYSE: ENB) has regularly touted the company's stable business model, especially during times of volatile energy prices. As a pipeline operator, the company found a seemingly endless amount of expansion opportunities when oil was above $100 a barrel. After two years of low prices, however, dividend investors need to reexamine their expectations for dividend growth.

The company owns $85 billion in assets, primarily comprised of 27,600 kilometers of oil and gas pipelines. Historically, this has been a lucrative business. Over 95% of contracts are based on volumes, not commodity prices, so when the price of oil fluctuates, Enbridge still generates the same profit per barrel transported. The explosion of North American liquids production helped fuel the company's growth over the past decade, with dividends and adjusted cash flows growing by over 10% a year since 2006.

Now with a 4.2% yield, Enbridge is a favorite among income-oriented investors. While the business will likely remain healthy, however, management's targeted annual dividend growth rate of 14-16% has a strong chance of ending up overly optimistic

It begins with project delays
Management's claim that most of its business is not affected by commodity prices just doesn't hold up when oil falls by over 50%. While revenues will continue to be based on volumes, not energy prices, volumes are very much dependent on market prices over the long-term. Where oil prices will eventually settle is hotly debated, but one of the better informed sources (the U.S. Energy Information Administration) doesn't see prices moving past $50 a barrel until at least 2018. Even if reality trumps expectations, it's tough to see production being brought on as fast as when oil was over $100 a barrel. 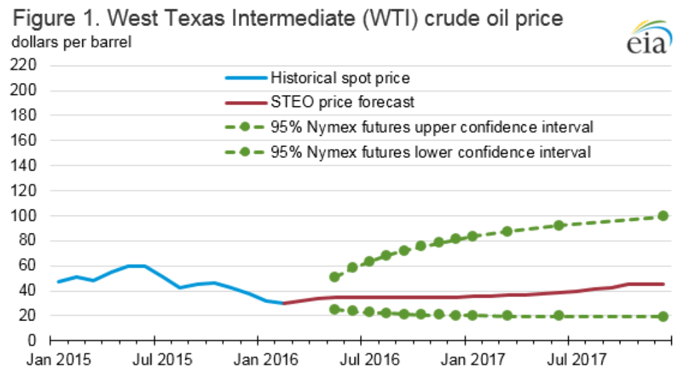 Now that oil prices have stayed low for much longer than most anticipated, we are starting to see how Enbridge's business isn't as stable as previously thought. The first sign of struggle came from a recent announcement that the company will defer $5 billion in spending until 2018, delaying multiple projects that would have commenced over 2016 and 2017. A major reason for this deferment is that oil sands projects (previously thought to provide long-term volume growth) are struggling due to their natural high costs of extraction. Nearly every oil sands producer is posting massive losses right now. On a recent conference call, management said it is looking for ways to reduce its dependence on oil sands growth, given the growing viability concerns regarding future projects in western Canada.

Enbridge's main customers include all of the major oil and gas companies operating in the tar sands. Its fortunes are therefore intimately tied to the performance of these major producers. According to the Canadian Association of Petroleum Producers (which represents oil and gas companies), expectations for oil sands production has come down dramatically from earlier forecasts. In June of 2014, estimates were for Canadian oil production to hit 6.5 million barrels per day by 2030. The latest estimates now forecast production to only hit 5.5 million barrels a day, mostly stemming from weak oil sands growth. Management is still pumping oil sands growth as a major driver, but the numbers are getting tougher to defend.

Capital costs are rising
Not only is Enridge facing some long-term structural issues stemming from lower demand growth for its services, but the cost of funding its audacious capital spending plan is growing. "Given a higher cost of capital today that we are seeing, we will be lowering the microscope even further to make sure that we are deploying the most optimal projects," its CEO said. Last month, the stock fell 6.2% after Enbridge was forced to issue 49 million shares, raising roughly $2 billion.

Through 2019, the company still plans on spending over $18 billion on projects, the major driver of dividend growth. The company noted that the latest equity raise should be sufficient to fund its growth program through the end of 2017, but because capital spending is expected to skyrocket starting in 2018 to finish projects that have recently been delayed, there will need to be further dilution or project deferments. Add in the rising cost of financing given the turmoil in the energy space, and faith in Enbridge's growth plans starts to erode.

To be clear, the company is still well-positioned to continue growing its business and payout. The rate of growth, however, will likely leave both management and shareholders disappointed.