Please ensure Javascript is enabled for purposes of website accessibility
Log In Help Join The Motley Fool
Free Article Join Nearly 1 Million Premium Members And Get More In-Depth Stock Guidance and Research
By Daniel B. Kline – Mar 29, 2016 at 9:40AM

The company operates in a space that may face some major changes in the near future.

Viacom (NASDAQ: VIA) operates largely in an industry -- cable television -- that's undergoing massive changes. That makes the company vulnerable because even though it owns some impressive brands -- MTV, Comedy Central, and Nickelodeon, to name a few -- the entire underlying framework of the pay television model could deteriorate. It's possible that the rise of streaming services like Netflix (NFLX 2.97%) could lead to wholesale abandonment of traditional cable bundles.

If that happens Viacom may be able to find other ways, whether it be streaming or participating in skinny bundles, to distribute its premier channels, but it's hard to picture that its lesser channels would have reason for being in that universe. Cord-cutting could undermine the strategy of a company that has used its core properties to spin off endless niche channels.

That makes sense in a world where forced bundling makes it so if people want to get VH1 and MTV, they also have to take MTV2, VH1 Classic, and half a dozen other spinoffs. In that scenario the company receives a few cents for every subscriber from the cable companies even if those people neither want nor watch channels like VH1 Soul, Palladia, or Nicktoons.

It's a sweet deal that could crumble under the pressure to offer cheaper cable options caused by a customer base with a viable option to pay less than $10 a month for Netflix instead of 10-12 times more than that in most cases for cable. 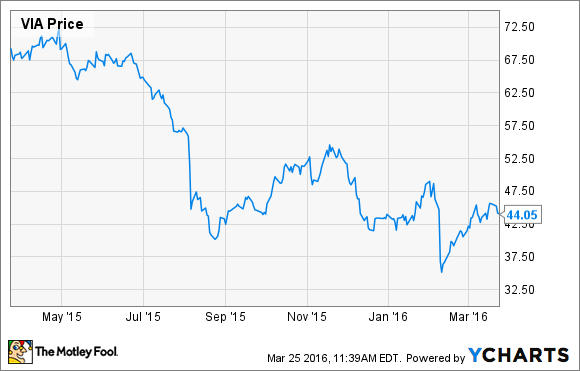 Viacom stock has not done all that well for the past 12 months. Source: YCharts.com.

Is cable going to implode?
Those with the most dire predictions about the cable industry suggest a future where Netflix and other streaming services lay waste to the current business model. They make analogies to the newspaper business and the music industry -- two segments that have been crushed by changing technology.

In reality, though, while cable has a lot to worry about and certainly needs to adapt, the cord-cutting numbers do not reflect an industry on the verge of implosion. Pay-television lost 100,000 subscribers in 2013, 150,000 in 2014, and 385,000 in 2015, according to Leichtman Research Group (LRG). That's a slowly accelerating loss; but even if the numbers double every year, it will be a while before people ditching cable for streaming does any real damage to an industry that still has 94 million subscribers.

What does this mean for Viacom?
In the cable space, the company is going to lose some subscribers, and it may even see pushback against cable companies being forced to take its less-popular channels. Viacom may also see more pay-TV providers offering skinny bundles, smaller packages with less channels for less money. That will cost it some money, but because it owns some top-tier, must-have stations, those will likely be included.

Viacom also owns the Nickelodeon brand, which should prove resilient because even when parents are cutting costs, they're more likely to drop channels they like than ones that can entertain little kids. Overall, the changing industry will hurt Viacom, but probably not too severely. The company will lose cable customers, but it could make up revenue selling its own direct-to-consumer streaming services, or even by licensing more content to Netflix and its rivals.

How risky is Viacom stock?
For many years, cable was a pure growth business because customers were locked in, and a company like Viacom could leverage its popular channels to force its lesser ones on people. That has clearly changed -- but only a little, and pretty slowly.

Viacom may have a crisis on its hands, but it's a very slowly developing one. That could change, but trends suggest it won't in 2016. That means management should be able to find ways to monetize programming and realign the company's assets to reflect the changing pay-TV market.

Certainly that makes Viacom stock more risky than in cable's heyday, but not overly so. This is not a surprise bit of technology that wipes out an industry, like streaming was for the music business. It's a slow shift in distribution that the company should be able to manage around.

Daniel Kline has no position in any stocks mentioned. He has never lived in a pineapple under the sea. The Motley Fool owns shares of and recommends Netflix. We Fools may not all hold the same opinions, but we all believe that considering a diverse range of insights makes us better investors. The Motley Fool has a disclosure policy.