At today's levels, this Fool thinks so.

When shares of a seemingly promising company suffer a significant decline, it can make even the most die-hard bulls question their resolve. And so it goes for Ambarella (AMBA -0.87%) investors right now, with shares of the video processing chip company down more than nearly 40% over the past year, and 65% below their 52-week high set last June.

But not without reason. As Ambarella management made abundantly clear over the past few quarters, its primary weakness lies with a slowdown in the formerly high-flying wearable camera segment dominated by key customer GoPro (GPRO -3.61%), the previous which arguably -- and ironically -- was a driving factor behind Ambarella stock's stellar performance through the first half of last year. To be sure, consider the obvious correlation in the respective stock prices of Ambarella and GoPro between March 2015 and today: 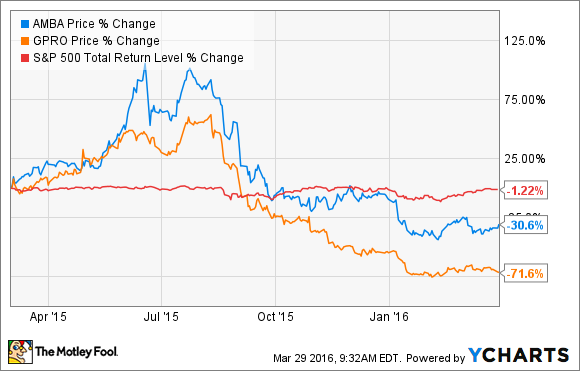 That raises the question: After the decline, is Ambarella worthy of investors' dollars today?

For perspective, GoPro previously accounted for as much as 30% of Ambarella's total revenue. So when the action camera maker suffered a series of missteps over the past year -- from the botched launch (and two subsequent price reductions) of its HERO4 Session camera last July, to under-funding marketing with the false hope it could rely on word of mouth, and most recently streamlining its camera offerings to just its three highest-end devices after a painful holiday quarter -- it was unsurprising Ambarella suffered even as it successfully worked to diversify its revenue streams into promising emerging market segments like professional IP security, automotive, home monitoring, and flying/drone cameras.

In fact, those supplementary markets are the primary reason Ambarella's revenue was able to climb 5% year over year last quarter, to $68 million. That was incidentally above the high end of management's $65 million to $67.5 million guidance range. And similarly, Ambarella achieved quarterly adjusted net income of $21.6 million, or $0.64 per share, above guidance for adjusted net income between $15 million and $17 million.

However, the market lamented management's guidance for the current quarter, which calls for revenue to decline 24% to 20% on a year-over-year basis. For that, they say we can primarily thank high inventory levels for customers in the wearable sports camera market, which will have a "substantial impact" on Ambarella's shipments. To be sure, Ambarella CFO George Laplante noted through the first month or so of its fiscal first-quarter 2016, actual demand from GoPro had fallen to the low-single digits as a percent of Ambarella's total revenue. So until GoPro refreshes its camera lineup -- which isn't expected to happen until later this year in time for the holidays -- Ambarella management is wisely taking a cautious approach to forecasting shipments into the wearable camera segment.

But investors should applaud Ambarella's prudence in this case, as it effectively sets up the company for success should the wearable camera space enjoy any semblance of traction in the coming quarters.

Of course, there's also the matter of competition. Several analysts have worried recently that chip giant Qualcomm (QCOM -1.04%), for example, is more aggressively pushing Ambarella's customers to switch to their competing solutions in both wearables and the burgeoning drone market. But that's also not lost of Ambarella management.

So in fact we know that [the people at] Qualcomm are talking to our customers, but we don't see them making much progress with camera solutions. In fact, we still believe that their current ad processor base solution is quite behind in video quality, compression efficiency, power consumption, video features and performance. And for your information on the GoPro drone, I cannot make comment[s] on that, but it's a high-end drone like a DJI Phantom 3. If you look at DJI Phantom 3, there are two major components in there; one is the camera SoC, the other one is a microcontroller for fly control. And in that particular design, we play only on the camera SoC side. And we notice that Qualcomm is trying to replace the five dollar microcontroller [...]. I think we are very well positioned. We have multiple solutions out there. I believe Qualcomm will try to come to compete, but I think we're ready.

This admittedly requires a certain measure of faith in Ambarella's likely partial view of its own business. But Ambarella's focus on innovation and high quality chips is the very reason its solutions have enjoyed such success in the first place. And while it might be tempting for a struggling company like GoPro to sacrifice overall quality to cut costs at this point, it seems obvious doing so would negatively affect demand from consumers who now expect more than just "good enough" from its camera-based products.

So is Ambarella worth buying and holding at this point? With shares currently trading around 19 times trailing 12-month earnings -- well below their five-year average P/E ratio of roughly 30.5, albeit with the expectation for greatly decelerated growth this year -- I think so. As long as Ambarella continues expanding its reach, I think investors willing to take advantage of this near-term weakness stand to be handsomely rewarded.