Please ensure Javascript is enabled for purposes of website accessibility
Log In Help Join The Motley Fool
Free Article Join Over 1 Million Premium Members And Get More In-Depth Stock Guidance and Research
By Andrés Cardenal - Mar 29, 2016 at 9:42AM

Michael Kors stock is delivering explosive gains on the back of healthy revenue growth. Do you still have time to buy?

Michael Kors (CPRI -4.97%) stock is truly firing on all cylinders lately, shares of the fashion retailer were trading around $35.50 by Jan. 15, and they are now in the area of $56.50 per share, accumulating a staggering gain of roughly 60% in a relatively short period of time.

Let's take a look at the reasons behind this impressive performance and, perhaps more importantly, whether Michael Kors stock can continue delivering market-beating returns going forward.

Some context
Michael Kors is a big player in the fashion handbags and accessories business. The company operates in the "affordable luxury" pricing segment: A typical Michael Kors handbag sells for between $250 and $350, and the company competes directly against players such as Coach (TPR -3.13%) and Kate Spade (KATE) in that price range.

Michael Kors has achieved spectacular success over the last several years, rapidly expanding its store base around the world and materially outperforming both Coach and Kate Spade in terms of revenue growth. 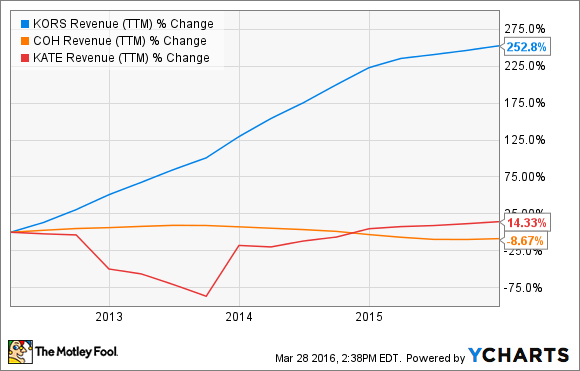 Nevertheless, growth started to slow down in 2014, and fashion is a notoriously fickle and volatile business. Once a company starts losing prestige among customers and brand value starts getting diluted, it can be remarkably difficult to reaccelerate growth. Investors have been growing increasingly concerned about Michael Kors and its ability to sustain its performance in the years ahead, and this is being reflected on the stock price.

Even after such an explosive gain over the last few months, Michael Kors stock is still trading more than 40% below its historical record, in the neighborhood of $98 per share, achieved in February 2014.

Solid performance provides upside fuel
Things took a dramatic turn when Michael Kors in early February announced better-than-expected financial performance for the latest quarter, proving to investors that the brand is still hot and the key variables are moving in the right direction. This dissipated a lot of doubts about the company, and the latest financial report from Michael Kors is arguably the main reason the stock has been doing so well lately.

Total sales during the quarter ended on Dec. 26 came in at $1.4 billion, a year-over-year increase of 6.3%. Excluding the negative impact from foreign currency fluctuations, total sales grew by a much stronger 9.9%.

Retail net sales grew 11% to $766 million, while comparable-store sales in U.S. dollars decreased 0.9%. On a constant currency basis, retail net sales grew 15.7%, and comparable-store sales jumped 2%. Wholesale sales increased 0.3% in U S. dollars and 3% on a constant-currency basis, while licensing revenue increased 8.4% versus the same quarter in the prior year.

Profit margins are under pressure due to store opening costs and currency headwinds, but Michael Kors still produces sky-high profitability. Gross profit margin was 59.5% of revenue last quarter, while operating profit margin was in the neighborhood of 29.3% of sales. Few companies in the fashion business can produce these levels of profitability, and this speaks volumes about the company's pricing power and management's ability to run a lean and efficient business.

CEO John D. Idol sounded quite satisfied with the company's performance and future prospects in the company press release:

We are pleased with our third quarter results, as we delivered revenue, comparable store sales and earnings growth ahead of our expectations. Our performance was driven primarily by strong consumer response to our luxury fashion product offering, particularly in our accessories and footwear categories, the continued momentum in our digital flagship business and outstanding growth in our international markets. As we look ahead, we are excited about our upcoming Spring collections that embody design innovation and underscore Michael Kors fashion leadership. In addition, we remain focused on further developing our digital flagship strategy as we offer our customers a seamless omni-channel experience, the build-out of our men's business, and leveraging our strong brand awareness to expand our business globally. We believe that the continued execution of these strategic initiatives positions us well to deliver long term growth.

Can Michael Kors continue delivering?
Just because Michael Kors' stock is rising steeply lately does not mean it's overvalued. Far from that, Michael Kors is priced at a considerable discount versus competitors such as Coach and Kate Spade. The following table compares the three companies in terms of valuation ratios such as price to earnings, price to earnings growth, and price to sales.

The conclusion is crystal clear: Michael Kors stock is priced at conveniently low levels in comparison to peers. As long as management keeps leading the company in the right direction and producing sustained growth, this fashion stock looks dressed for success.