Here's everything you need to know about the drugstore chain.

Looking for a quick run-down of Walgreen Boots Alliance (WBA 1.84%)? Look no further.

Below we'll take a look at the key drivers of Walgreen's performance. The stock has become a leader in the pharmacy/drugstores segment, with a slew of acquisitions and expansions, and shareholders have been rewarded as the stock has nearly tripled over the last three years. 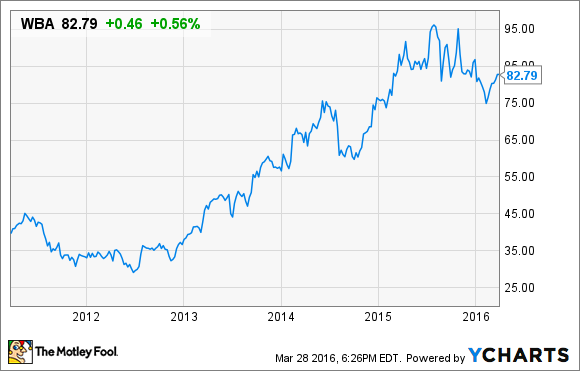 No shortage of M&A
As much as any other consumer-facing company, Walgreen has embraced the strategy of growth by acquisition. Recent high-profile acquisitions have included New York-based Duane Reade in 2010, drugstore.com in 2011, and Bioscrip's community specialty pharmacies in 2012. That year, the company began a merger with Boots Alliance that created the first global pharmacy enterprise.

Walgreen's spent $15.3 billion to acquire Boots, taking over the company in two stages.

Last fall, Walgreen made waves with another massive acquisition, taking over Rite Aid (RAD 4.06%), the U.S.'s #3 drugstore chain, for $9.4 billion, or $17.2 billion including debt.  Walgreen said it would revamp Rite Aid stores to focus on health, wellness, and beauty, but the deal has yet to pass regulatory muster, and observers are skeptical that it will be approved. The Federal Trade Commission is in the process of reviewing the matter.

Rejection of the deal would be a setback for Walgreen. As rival CVS has made its own acquisitions, it likely would only mean Walgreen would focus its attention on a new acquisition target. Still, the pending approval of the Rite Aid acquisition will be the biggest catalyst for Walgreen for the foreseeable future.

Other factors
Looking at other factors influencing Walgreen's performance, the company has a solid record of beating earnings estimates, and its status as a Dividend Aristocrat is a sign of its track record of growth and ability to consistently raise its dividend payout.

Walgreen's profits should continue to grow, as it plans to eliminate $1 billion of expenses this year by realizing synergies with Alliance Boots.

While comparable retail sales were down slightly in the US, the drugstore industry continues to benefit from the increasing premium placed on convenience. With over 8,000 stores nationwide, Walgreen's is an easy stop for its customers, many of whom are already coming in to pick up prescriptions. Walgreen's began adding groceries to its shelves and expanding its retail department about five years ago, leveraging its real estate footprint. Sales should also benefit from the growing number of insured Americans under the Affordable Care Act. The Centers for Medicaid & Medicare Services expects U.S. Prescription Drug Retail Sales to grow between 5% and 6% annually for the next four years. The aging baby boomer population is also expected to drive prescription drug sales.

In this aspect, Walgreen's is just riding a rising tide in the industry. Notably, of the major drugstore chains, Walgreen has actually performed the worst in the last five years. 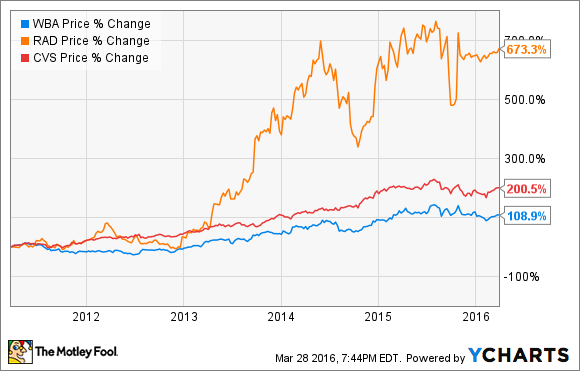 Still, opportunities beyond the Rite Aid acquisition remain for further growth, and the industry tailwinds and cost-cutting initiatives should help boost profits. I'd expect Walgreen to continue to be a winner.