A few weeks before the Masters golf tournament, Under Armour (NYSE:UAA) has released its first set of golf shoes to the public, with the help of endorser and defending champion Jordan Spieth. Nike (NYSE:NKE) is the leader in athletic footwear sales, and Under Armour is pulling a page out its playbook.

Footwear sales
Nike is a company built on athletic footwear -- it began by selling shoes out of the trunk of founder Phil Knight's car -- that successfully ventured into apparel and equipment sales. Under Armour was built around a moisture-wicking T-shirt, moved into other apparel, and now sports a small but rapidly growing footwear business. Footwear makes up 65% or more of total sales in every region that Nike operates in. Under Armour generated only 17% of total sales from footwear in 2015.

It's possible that Under Armour can forge a path to $30 billion in annual sales predominantly with apparel sales but Nike has already shown that it can be done by focusing on footwear. Footwear sales grew 57% in 2015, making it the fastest-growing segment outside of connected fitness, and CEO Kevin Plank sees it shortly becoming a $1 billion business. Golf shoes fit into the puzzle by helping with branding and scale.

Under Armour is viewed as an apparel company. It struck gold with Stephen Curry, signing him away from Nike, and has built a strong basketball sneaker business from nothing in just a few short years. Its running sneakers, and now golf shoes, will further drive the message into consumers' heads that Under Armour is a footwear company and knows what it's doing. Nike's success with Air Jordan sneakers allows it to sell more cross trainers.

While golf shoes are functionally different from basketball or running shoes, there is overlap in materials and production techniques. Under Armour should be able to secure better terms with material suppliers and factories that build the shoes as they continue to grow. This drives down costs and improves its profit margin. A technological advance put into a golf shoe might eventually make its way into NFL MVP Cam Newton's football cleat, and vice versa. Innovation doesn't always happen in a straight line. Having more types of individual footwear, even if one particular type isn't a huge seller on its own, helps the whole enterprise. 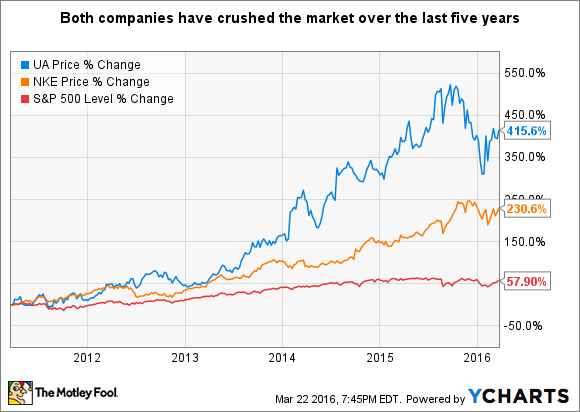 The bonuses: China and golf
Nike's sales of footwear in China made up over 73% of total revenue in the fourth quarter, which was the highest of any region. Under Armour only generates around 13% of total sales from outside North America. China is the biggest opportunity out there, and the Chinese consumer craves footwear. It's inevitable that Under Armour will continue to grow its international presence, but a focus on footwear should help to accelerate the journey in China.

In 1996, Nike signed Tiger Woods to a $40 million endorsement deal. At the time, the company didn't produce golf clubs or balls but was making a bet on the future.In 2015, even after a few lean years in the golf equipment business, Nike Golf contributed $771 million in revenue.Under Armour has been overlooked for years and now is the second largest athletic apparel company in the United States. Betting against Plank and his company has been a losing proposition for the past 20 years, and I'd be shocked if a line of golf equipment isn't in the works. He has stated a goal of $10 billion in revenue by 2020, and a few hundred million dollars in golf equipment sales could help it get there.

Under Armour's market capitalization is one sixth that of Nike's, and that's an opportunity for long-term investors. Explosive growth from footwear (to get closer to parity with apparel sales), international growth (especially in China and India), and new business lines (such as golf equipment) leave me bullish on its future. I expect Nike to outperform the market as well, with less upside and less risk. Splitting an investment between the two stocks and holding for at least five years should lead to above-average returns, and I plan on holding my shares for much longer than that.