Exact Sciences (NASDAQ:EXAS), maker of the Cologuard colon cancer detection test, is off to a rough start so far in 2016, with the stock down 33% so far in 2016. 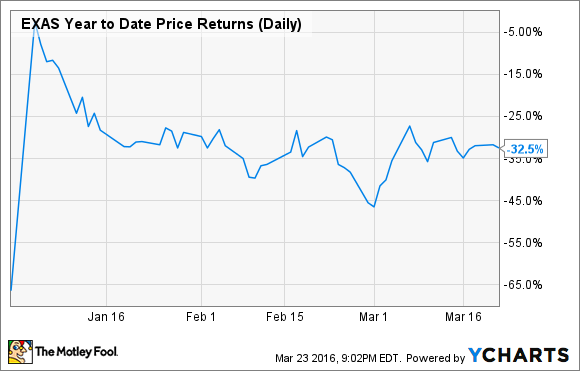 Some hiccups in the sales ramp-up, notably that management expects sequentially flat sales from Q4 2015 to Q1 2016 -- and this still very early in Cologuard's commercialization -- are partially to blame, as is the general biotech malaise. But I think there's plenty of reason to be bullish on Exact Sciences' chances if management executes well on its business plan. Here are my top three reasons the stock could rise.

1. Better compliance
One of Cologuard's key benefits is its excellent patient compliance. And given that one study reported that only three out of every 1,000 people adhered to annual fecal blood testing over a 10-year period, compliance in this area is a big issue. Exact Sciences' management trumpeted data showing that 75% of patients preferred Cologuard to a colonoscopy, which isn't surprising given that Cologuard just requires a stool sample to be shipped to Exact Sciences, instead of a probe. Cologuard's compliance rate of 71% in 2015 was nearly double that of reported colonoscopy uptake in the United States.

Compared to alternatives, Cologuard is great. But it can still do better. Management admitted to a sizable misstep around the winter holidays, as a number of Cologuard kits that were sent out to patients were never returned. Patients have kept them for months at this point, so management doesn't expect to get those kits back. While Exact Sciences is following up with these noncompliant patients with phone calls and other touch points, the prognosis isn't good. To quote CEO Kevin Conroy from the Q4 earnings call, "We don't expect a significant percentage of those patients to complete those tests, but we will do everything in our power to get them screened." (Quote from S&P Global Market Intelligence.) That's not exactly a bullish sentiment.

So Exact Sciences whiffed on the holidays. That's not a big deal, so long as management learns from it and figures out how to better serve all of its patients. It's early days yet in Cologuard's commercialization ramp, so driving better compliance is a big opportunity for the company.

2. Cologuard expanding coverage
Commercially speaking, tests such as Cologuard live and die based on whether they're included in an insurer's formulary. The alternative is persuading patients -- typically pretty price-sensitive where non-acute healthcare is concerned -- to pony up a bunch of money for a non-covered test. And given what I just shared about Exact Sciences' difficulty getting patients to even return the Cologuard kit, you can see why getting folks to pay extra would be a pretty tough sell.

Earlier this year, Exact Sciences persuaded Anthem, which markets Blue Cross-Blue Shield plans in 14 states, to cover the Cologuard test. Now Exact Sciences is working with each individual state in the Anthem umbrella to get Cologuard included as an in-network test. And given that Anthem serves over 38 million Americans in its plans -- including 1.4 million Medicare Advantage customers and millions more in commercial insurance who would be eligible for this test -- this is a big opportunity for Exact Sciences, if management executes well. While Medicare covers Cologuard, Exact Sciences is still engaging in the necessary spadework of negotiating with other commercial payers. Another breakthrough like Anthem's could make a big difference to the business, so stay tuned.

3. A pipeline that could deliver
Cologuard is a great product with a bright future -- so the question is whether Exact Sciences will successfully deliver additional detection tests to market. Management is investigating tests to identify pancreatic and lung cancers, given that early detection of both diseases is crucial to a good prognosis. Initial data readouts are expected later this year, so that's a nice opportunity for Exact Sciences to diversify away from Cologuard and get some more irons in the fire.

Fortunately, Exact Sciences has plenty of money to fund its operations and support that expansion. Exact Sciences' $306.9 million on the balance sheet and Q4 2015 cash burn of $36.6 million imply a solid cash ramp, particularly as Cologuard picks up steam. With management guiding for 240,000 Cologuard tests to be administered in 2016 -- more than double the 104,000 achieved in 2015 -- hopefully the company will be able to achieve scale and begin reducing its cash burn.

When it comes down to it, Exact Sciences has a great product -- Cologuard -- which should provide recurring, ever-growing revenue as doctors, patients, and insurers get used to its convenience and value. With everything the company has going for it, the next few years look exciting to say the least.