If the dollar weakens, Europe strengthens, and Booking.com continues to widen its moat, there will probably be plenty of reason for the stock to move higher.

Since the start of 2014, Priceline (BKNG 0.70%) stock hasn't lived up to its reputation as a market-beating stock. It's currently trailing the S&P 500 by about 3 percentage points. 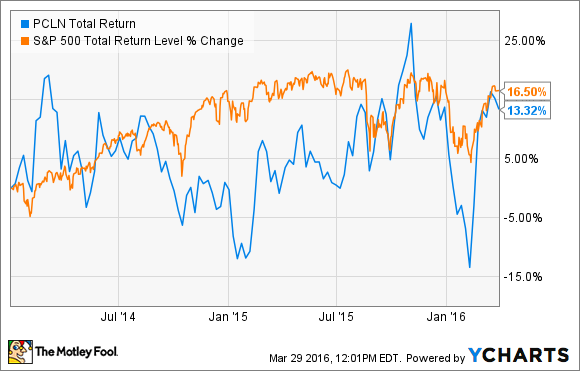 In recent quarters, investors have grown concerned over continued economic softness across much of the world, and what effect it may have on many industries -- global travel included. However, despite these headwinds, the following factors could send Priceline's stock higher.

The U.S. dollar weakens
With over 80% of its 2015 revenue generated outside the U.S., Priceline is a truly global company. Although this diversifies Priceline's revenue stream from a geographic perspective, the company reports its earnings in dollars. In periods when the dollar is rising -- like it did in 2015 -- other currencies typically weaken and translate to fewer dollars.

Overall, the dollar's strength had a negative impact on Priceline's 2015 performance, even though the company hedged its currency risk to some degree. Had the dollar remained constant between 2014 and 2015, Priceline's gross travel bookings would've increased by 25% annually instead of increasing 10% as reported; gross margins would've increased by 27% instead of the 13% reported increase. Conversely, if the dollar weakened or stabilized, there's a good chance Priceline would report much stronger results.

Europe's economy improves
The European economy continues to remain sluggish, where Priceline generated two-thirds of its 2015 revenue. Even with macro weakness in the region, Priceline's European revenue increased by 12.4% to $6.2 billion in 2015 in U.S dollars terms. This suggests that management is capable of driving growth in challenging environments.

Still, it could be argued that Europe's underlying weakness has held back Priceline's European operations from realizing its full potential. After all, if the European economy became stronger, it would likely encourage more Europeans to travel -- and position Priceline to benefit.

Booking.com's moat widens
Priceline boasts the largest collection of bookable rooms in the world, giving it a sizable competitive advantage and powerful network effect that helps reinforce the value of its ecosystem. At the close of the fourth quarter, Priceline's Booking.com reported of a 34% annual increase in the number of bookable accommodations on its site, to more than 850,000 properties. Comparatively, Expedia (EXPE 0.95%) had about 269,000 bookable properties at the close of the fourth quarter.

Because Priceline's ecosystem attracts more guests than Expedia -- one of its largest peers -- it encourages hotel owners to list their properties on Booking's network before other sites. That's a powerful dynamic that's proven difficult for competitors to challenge.

Looking ahead: more opportunity
As the world becomes increasingly connected through the Internet, the online travel industry remains poised to benefit. Of the $1.3 trillion spent on travel bookings worldwide, only about 40% are made online. Being the top dog of online travel, Priceline has solid positioning and encouraging long-term industry prospects on its side. Shorter term, if the dollar weakens, Europe strengthens, and Booking continues to widen its moat, there will probably be plenty of reason for the stock to rise.