Please ensure Javascript is enabled for purposes of website accessibility
Log In Help Join The Motley Fool
Free Article
Join Nearly 1 Million Premium Members And Get More In-Depth Stock Guidance and Research
By Daniel B. Kline – Mar 30, 2016 at 6:21AM

Both companies have their strengths, so picking the best one for your portfolio may depend upon what type of investor you are.

In some ways, International Business Machines (IBM -0.04%) represents technology's old guard, while Alphabet (GOOG 1.56%) (GOOGL 1.90%) stands at the forefront of a new breed of innovators.

On the surface, it's Tim Duncan and the San Antonio Spurs taking on Steph Curry and the Golden State Warriors. IBM has the intelligence that only comes from experience and like Duncan's Spurs, the company still competes at a high level. Alphabet, on the other hand, looks as unbeatable as Curry's Warriors -- a young and unstoppable technology force with too many weapons for its rivals to handle.

But while IBM has the pedigree and Alphabet has the new-kid swagger, when you dig deeper, both offer something unique to shareholders. That makes deciding which one is the better investment a more personal question than it usually is when comparing two companies in the same space.

The case for IBM
IBM deserves credit for existing at all. The company survived the transition from being a products company -- one known for its PCs -- to being a service-driven business. That has not been an easy shift, and as you see below, its share price suffered for it. However, even though its 2015 results showed a downturn in business, it may also have been the year IBM turned the corner.

For 2015, the company reported diluted EPS from continuing operations of $14.92, a 10% drop. But while that decline was a bit disappointing, investors should be cheered by the changing mix of how the company made its money.

"We continue to make significant progress in our transformation to higher value. In 2015, our strategic imperatives of cloud, analytics, mobile, social and security grew 26% to $29 billion and now represent 35% of our total revenue," said CEO Ginni Rometty in the company's earnings release. "We strengthened our existing portfolio while investing aggressively in new opportunities like Watson Health, Watson Internet of Things and hybrid cloud. As we transform to a cognitive solutions and cloud platform company, we are well positioned to continue delivering greater value to our clients and returning capital to our shareholders."

And while it's generally easy to dismiss CEO comments in an earnings release as hype, in this case Rometty spoke the unvarnished truth. IBM has become a different company, most notably in its relatively under-the-radar growth in the cloud. For the full year, total cloud revenues (public, private and hybrid) increased 43% to $10.2 billion, the company reported.

That's an impressive pivot into a major growth space, which shows that IBM is not just a wily veteran -- it's also an innovator moving forward in new directions. Add that to the company's steadily growing dividend payout (yielding 3.5% at Monday's close), and 2015 makes a case for IBM as not a faded former champion trading on past glory, but an emerging contender with its best years ahead of it. 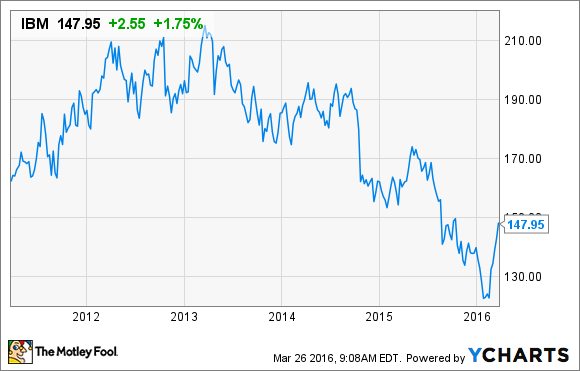 The case for Alphabet (formerly known as Google)
With its impressive advertising business, Alphabet has a steady foundation driving its revenue. In addition to that, the company, which now includes Google and several other units, has a healthy appetite for risk. While IBM is working to transition its business into known growth channels, Alphabet has opted to spend heavily on moonshots -- projects which may pay off handsomely -- or flame out expensively.

These projects, which include things like driverless cars, Google Glass, and Google Fiber, offer a high level of risk/reward. For example, the company's effort to create cars piloted by autonomous expert systems could radically change how Americans travel. To get there, however, Alphabet not only needs to create technology that solves the problem, it also needs to get laws changed to allow that solution on the roads, and then convince the public that they want it.

Each one of those tasks represents a steep hill to climb, and every moonshot has similar challenges. If one pays off, the returns could be enormous -- which would keep Alphabet's high-flying stock moving upward -- but the risk exists that the company will invest heavily in many of these projects without producing a massive success. Google is reinvesting more of its profits in moonshots, while IBM has chosen to return more money to shareholders. Alphabet's choice is a bet on its ability to change the world, but the high upside potential comes with an equally high risk. 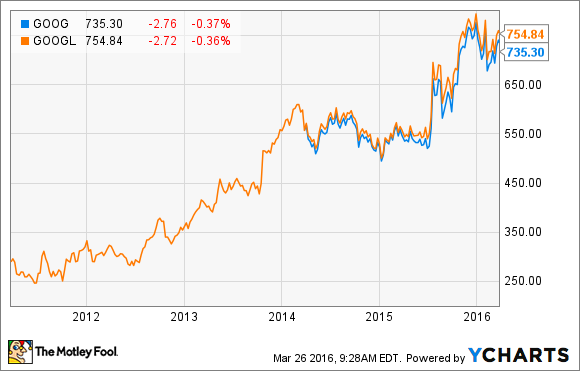 Which is best for you?
IBM stock looks tempting if the worst is over and the recent slight recovery in its share price signals the start of an upward trend reflecting the success of the company's transformation efforts. Your bet would also be hedged, thanks to the company's long tradition of returning money to shareholders via dividends.

With Alphabet, you get a stock that has generally traveled upward, but that may need a new hot product to propel it further. As dominant as the company is in online and mobile advertising, we can expect revenues from those areas will be relatively steady, not a source of tremendous growth. Alphabet shares are essentially backed by that revenue, which it's using partly to go after next big -- maybe really big -- thing.

IBM might be a better value right now because it has been beaten down over the last few years as the company searched for an identity. Now may be the time to buy because it does appear the company has a direction that it can pull off. Alphabet, on the the other hand, may suffer a bit in the near term even if its numbers are good, simply because when companies fly as high as it has, the stock market tends to punish them in years when no major innovation takes off.

It's hard to make a case against either, but on a pure value basis, IBM may be the safer stock now because it has room to grow without needing to land a moonshot.

Suzanne Frey, an executive at Alphabet, is a member of The Motley Fool's board of directors. Daniel Kline has no position in any stocks mentioned. He thought Superman vs. Batman was a lot to sit through since it was mostly a trailer for the next movie. The Motley Fool owns shares of and recommends Alphabet (A shares) and Alphabet (C shares). We Fools may not all hold the same opinions, but we all believe that considering a diverse range of insights makes us better investors. The Motley Fool has a disclosure policy.