Both retail chains are well into major turnaround efforts.

In recent years both Kohl's (KSS 0.47%) and J.C. Penney (JCPN.Q) have struggled to find their footing in a changed retail environment.

JCP had the highest profile failure during the period where Ron Johnson served as its CEO. The former Apple retail store boss turned the department store into a grand experiment. He got rid of sales and remade the chain's stores in a way that paid little consideration to its existing customer base. It was a grand disaster which led to the reinstatement of Myron Ullman -- the man who had been pushed aside for Johnson -- to the top job.

Kohl's struggles have not been quite so dramatic but the company's stock has suffered a fairly steady decline since July 2015. On July 7, shares closed at $64.96 and then they headed more or less steadily downward, closing March 29 at $46.55, a 28.34% decline. It's not so much that Kohl's made any huge mistakes it's just that the retail world has changed around the company and there have been signs it's not quite ready to compete.

Still, with both companies having reported positive sales growth in 2015 the worst may be over and better days could be ahead for the two retailers. 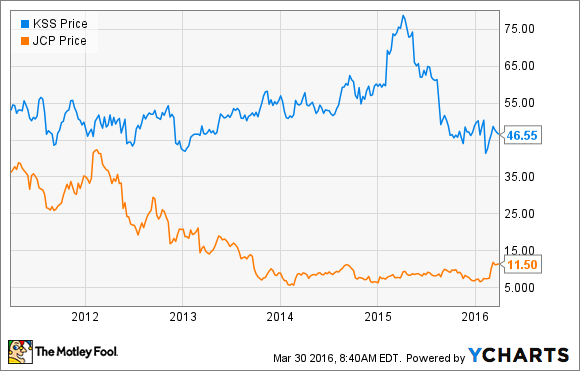 A case for Kohl's
Anytime a company has a named turnaround agenda that makes it clear that it at least acknowledges it had a pretty major past problem. In this case, Kohl's has the Greatness Agenda, a program which sounds like a New Deal-era government program, which is actually a blueprint for the retail chain under CEO Kevin Mansell.

The multi-year plan has been evolving, but it does appear to be meeting its stated goal of driving "organic top-line growth by seeking out and taking advantage of opportunities that will elevate the course of business, while also creating a clear focus around those business critical activities that are required to accelerate growth."

In 2015 Kohl's reported 1% total sales growth and adjusted EPS of $4.01 for 2015 (excluding a loss on the extinguishment of debt). That's a needle pointing up, albeit barely, though Mansell was optimistic in the Q4 earnings release.

"We believe that the strategic framework of the Greatness Agenda is working as evidenced by our achievement of five consecutive quarters of positive comparable sales increases. I am particularly encouraged by the 4% increase we saw between Thanksgiving and Christmas. At the most competitive time in retail, customers were choosing Kohl's," he said, while acknowledging that work remains. "This strength, however, was substantially offset by softness in early November and in January when demand for cold-weather goods was especially low, resulting in a quarterly comparable sales increase of 0.4%, which was below our expectations."

Going forward Kohl's plans to not simply stay the course, but to adjust to meet changing needs. Along those lines it's opening seven smaller-format stores in 201 while also launching two more pilot Off/Aisle discount stores as well as a number of outlets built around the Fila brand. The chain also plans to close 18 underperforming stores, representing less than 1% of total sales.

Still, while its CEO is confident that the chain is on the right path its guidance for 2016 predicts total sales growth ranging from a 0.5% decline to a 0.5% gain with comparable stores sales numbers coming in between 0% and 1%

Is J.C. Penney doing it right?
JCP had a bigger hole to climb out of than Kohl's. Both companies have struggled in the Internet era but only J.C. Penney had to recover from actively telling its customers their opinion did not matter. That's effectively what happened under Johnson and Ullman's return somewhat steadied the ship and now it's up to new CEO Marvin Ellison to continue the turnaround.

There are signs that may be happening. The company reported upbeat 2015 results. Comparable store sales grew 4.1 % for the fourth quarter and 4.5 % for the full year along with full-year adjusted EBITDA of $715 million, a $435 million increase. The chain also raised its gross margin and saw its adjusted net loss drop from $463 million in 2014 to $315 million in 2015.

Like his counterpart at Kohl's, Ellison believes he has things pointed in the right direction.

"While significant work remains to regain our status as a world-class retailer, the company's financial performance this year indicates we are on the right path to achieving our long-term financial objectives," he said in the earnings release. "Building on the momentum of 2015, and the positive trends of the mid-tier US customer, we now expect positive adjusted earnings in 2016, and EBITDA of $1 billion."

As the CEO said, the outlook for 2016 includes a return to profitability based on a prediction of 3-4% comparable store sales growth, continued expense management, and an improvement in gross margin versus 2015.

Which is a better buy?
Realistically an argument could be made in favor of either company. Both appear to have weathered the storm and the two chains seem to have competent management in place to lead them going forward. J.C. Penney had more work to do than Kohl's, but Ellison and Ullman before him have mostly undone the damage Johnson did to the brand.

Although the turnaround at both companies has been admirable, if forced to buy one stock J.C. Penney has a slight edge if only because Kohl's is trading closer to its five-year average while JCP's price remains depressed. These are both retailers which have righted the ship, but big storms remain ahead and there is no guarantee the worst is over. Still, with competent CEOs and solid plans, there's reason to believe both chains could not merely survive but thrive.

This Beaten-Down Stock Is Searching for a Lifeline. Has It Already Missed the Boat?
409%