Over the past five years, Abiomed (NASDAQ:ABMD) shareholders watched with glee as their investment grew more than 600%, as of last summer. Now they're sitting on a gain of "just" 529%, after watching the stock's chart bounce around like a slow-motion EKG monitor.

At the heart of its volatility is a sky-high valuation of around 32 times trailing earnings. If watching this stock constantly plummet and then rally has your finger hovering over the "sell" button, I'd be the last person to criticize you.

A wise, and wealthy, old man once told me, "You'll never lose money taking a profit." Before you do, at least let me walk you through some figures and recent developments that may convince you this stock deserves its lofty valuation and could head higher still from here.

A banner fiscal year that keeps getting better
As Abiomed wraps up its fiscal year this month, I'll bet you couldn't find enough despair at its corporate headquarters to block a single coronary artery. Looking ahead to full fiscal-year 2016 earnings, it seems the company underestimated its own success. When reporting fiscal third-quarter earnings in early February, it raised annual revenue guidance from a previous range that topped out at $315 million, up to $326 million for the fiscal year ending March 31.

When evaluating smaller medical device companies with rapidly growing revenue, it's always worth making sure they aren't achieving that growth by overspending on sales staff. Let's have a look.

During the nine months ended Dec. 31, revenue rose almost 45%, or about 15% faster than operating costs during the same period the previous year.

Previously, management guided toward an operating margin range that topped out at 17% but in February raised that figure to "above" 17%. Given the 19% margin we've seen in the first nine months, shareholders could be in for a pleasant surprise.

Stay classy, government agency
Recently, the FDA informed Abiomed that an expected advisory committee meeting to discuss granting pre-market approval of four Abiomed products wouldn't be necessary. Before you get too enthusiastic about increasing bureaucratic efficiency, the FDA still insists on using confusing codes and acronyms, especially for medical-device classes: 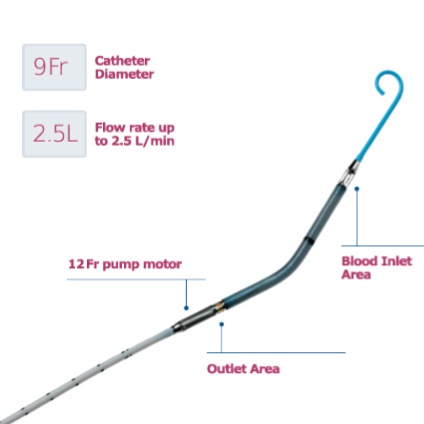 What you'll find bazonkers is that the four transcatheter circulatory pumps recently approved spent years with 501(k) clearances for partial circulatory support for up to six hours. The Impella 2.5 gained 501(k) clearance in 2008 but was the first of its breed to win a premarket approval (in March 2015) but only for use during high-risk percutaneous implant procedures.

"So we've got this tiny catheter that you insert in the femoral, or thoracic artery. Once the inlet valve reaches the left ventricle of the heart, a 4mm diameter pump in the ascending aorta pumps up to 2.5 liters of blood per minute."

"Is this device FDA approved?"

"Well. No. But, it is cleared for partial circulatory support for up to six hours."

Room to grow
Abiomed's latest FDA approvals -- "premarket approvals" in medical-device lingo -- expands the use of Impella 2.5, Impella CP, Impella 5.0, and Impella LD devices to include use for emergency patients suffering from cardiogenic shock following a heart attack or cardiac surgery.

The CDC estimates about 735,000 Americans suffer a heart attack each year, although what percentage of these are considered "emergency patients" is surprisingly hard to pin down. Roughly 7.5% of heart attack victims experience cardiogenic shock, which basically means inadequate blood flow. That would increase Abiomed's addressable U.S. population by roughly 55,000 patients per year, and with the frequency of cardiac catheterizations at an even 1.0 million in 2010, there's no shortage of healthcare professionals familiar with sliding tubes into hearts.

Now that the company can market most of its devices as "FDA Approved" to post-heart attack patients, it seems there's plenty of room to grow. Medicare coverage and reimbursement isn't an issue. Even third-party insurers are on board. If I were among the lucky investors holding Abiomed shares over the past several years, I'd stick around for the next chapter of its growth story.

Risk ahead
I'm not suggesting that Abiomed stock is without risk. Far and away the biggest threat is St. Jude Medical (NYSE:STJ) and the HeartMate percutaneous heart pump it recently acquired from Thoratec. Thoratec won FDA approval for a long-term version with a pocket controller years before St. Jude acquired the company.

Overall, Thoratec product sales grew 15% at constant currency to $136 million in the quarter ending Dec 31. That's a bit above the $85.8 million in sales Abiomed recorded during the same period, but doesn't hold a candle to the 38% growth compared with the same period a year previous.

Thoratec, and now St. Jude, is running a head-to-head trial against Abiomed's earlier Impella 2.5 system. If the results, expected in December, show St. Jude's device superior to Abiomed's, it would hardly be a death blow, given it's the company's oldest approved device.

If Abiomed's valuation is still sky-high at the time, though, the stock could be heavily affected. However, if the Thoratec device proves inferior, it could boost Abiomed shares, or at least allow them to maintain their sky-high multiple.