Despite the Fed's best efforts, history shows the economic cycle to be an unstoppable force.

Those of you who have an optimistic outlook for the U.S. economy may want to grab something warm and fuzzy before reading on, because the Atlanta Federal Reserve dropped quite the bombshell on Wall Street and economists to begin the week.

First, the February trade deficit came in at nearly $62.9 billion, which was a bit higher than economists had forecasted. In light of this trade gap, the Atlanta Fed doubled the adverse effect it's expected to have on Q1 GDP to 52 basis points from 26 basis points.

On top of these major issues, personal income rose by a mere 0.2% in February after jumping by 0.5% in January, headline inflation slowed to just 1% from 1.2% on a month-to-month basis, and pending home sales, while up in February by 3.5%, are essentially flat from where they were in December.

In sum, it's looking like a slower-growing Q1 and first-half of 2016 than initially forecast.

An inevitable reminder from the Atlanta Fed
This data is particularly discouraging when you take into account the lengths that the Federal Reserve has gone through to prop up the U.S. economy since the Great Recession. We've undergone not one or two, but three separate versions of quantitative easing, and we've witnessed the Federal Reserve support a federal funds target rate that's essentially hovered near 0% to 0.25% for more than seven years. This has kept lending rates near historic lows for mortgages, credit cards, and other interest-bearing loans.

On paper this would look like the perfect recipe for loan growth, business expansion, strong business pricing power, robust housing growth, healthy inflation, and low levels of unemployment. We have achieved some of these targets -- unemployment is right around historical norms and well off its 10% peak during the Great Recession -- but others have fallen short. Housing growth hasn't exactly snapped back (in fact, it's slowed recently despite sub-4% 30-year mortgage rates) and inflation remains lower-than-targeted, which makes me question the pricing power of American businesses. 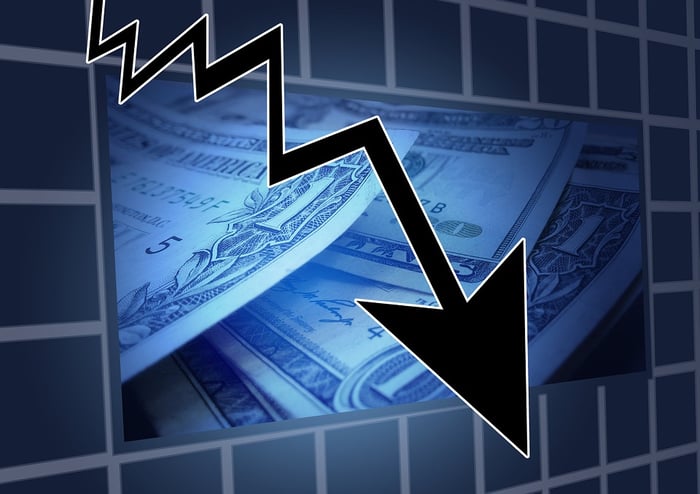 What the Atlanta Fed data serves to remind us is that no matter what the Federal Reserve does to support the U.S. economy, recessions are an inevitable component of the economic cycle. To be clear, I'm not necessarily implying that Q1's forecasting weakness is predictive of an ensuing recession. However, historical data has shown that recessions aren't as uncommon as we might think.

Since 1929, we've had 14 recessions of varying lengths. This works out to a recession about every six years. Over that timespan we've also gone as long as 10 years without a recession, but eventually one always seems to catch up with the U.S. economy. It's now been more than seven years since our last official recession ended, implying that at some point in the future (and probably sooner than later) a recession is expected.

What you should do
But just because a recession could be around the corner, it doesn't mean you should be adjusting your investment strategy one iota. If the historical data is any indicator here as well, it's that if you stick to your strategy of buying and holding quality stocks, and investing at regular intervals, then you should be just fine. A few years back J.P. Morgan Asset Management analyzed data on the S&P 500 between Dec. 31, 1993 and Dec. 31, 2013 from Lipper and discovered something amazing. If investors purchased the S&P 500 tracking index at the beginning of this period and held on without selling, they netted a 483% profit. Mind you, this profit comes after surviving two 50%+ drops during the dot-com bubble and Great Recession. Now, if investors missed only the 10 biggest gains during this 20-year period (about 5,000 trading days), their gain tapered off to just 191%. If they missed the 40 best trading days, their return was actually negative over this roughly 5,000 trading-day period.

In other words, the data unequivocally showed that trying to time the market was a poor idea. Sure, jumping out of the market could cause an investor to miss a big down day from time-to-time, but there's just as much likelihood of missing a strong advance as well. Additionally, there's simply no way of knowing where the market is going to head over the very short-term with any consistency, which is why timing the market isn't a recommended strategy.

Your smartest bet remains investing in high-quality dividend stocks that can help offset a downward trend in stock prices. Dividends can act as a beacon that draws investors to strongly profitable businesses, and when reinvested into more shares of stock (potentially even at a reduced share price during a recession), can generate substantial inflation-topping wealth over the long run.