Please ensure Javascript is enabled for purposes of website accessibility
Log In Help Join The Motley Fool
Free Article Join Over 1 Million Premium Members And Get More In-Depth Stock Guidance and Research
By George Budwell - Mar 30, 2016 at 11:00AM

What: Acadia Pharmaceuticals (ACAD -0.91%), a clinical-stage biopharma, saw its shares gain more than 21% immediately after the opening bell Wednesday on extraordinary volume. The company's stock is surging this morning following a positive advisory committee vote for its experimental Parkinson's disease psychosis drug called Nuplazid. Specifically, a panel of outside experts voted 12 to 2 that the benefits of Nuplazid outweigh its potential risks.

So what: Acadia's stock has been getting pummeled heading into this review, as short-sellers seemed to believe that the FDA would reject the drug based on its rocky clinical history. In fact, Acadia's stock is still well off of its 52-week highs even after today's double-digit move to the upside: 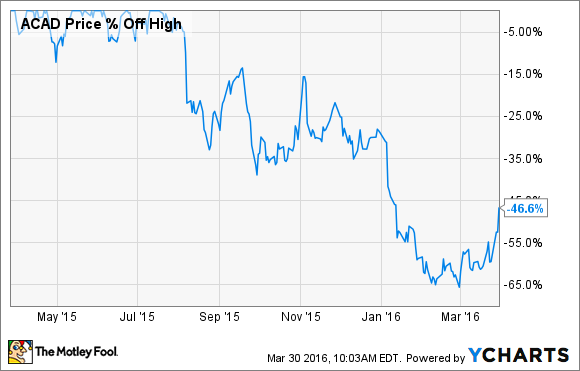 Now what: The FDA is expected to hand down its final decision on Nuplazid by May 1. While the agency doesn't have to follow the recommendation of this external panel of experts, the FDA has typically approved drugs that garner favorable opinions from an advisory committee. In short, the chances of Nuplazid getting the green light from the FDA look fairly strong following this overwhelmingly positive vote.

As such, I would expect short-sellers to start to hit the exits over the next few weeks, especially since some analysts are forecasting that the drug could generate peak sales in excess of $3 billion. Acadia's stock appears primed for a huge short squeeze after this positive regulatory development. Stay tuned.