Innovation, brand strength, and investment in the future have made Nike great and will continue to drive its stock price even higher.

It's easy to get bogged down in minutiae when analyzing publicly traded companies, but for some, the root of their success is easy to trace. For Nike (NKE -1.12%) it's always been about product innovation, brand power, and investing for the future. Three quotes from the third quarter earnings call show me that CEO Mark Parker and his team are sticking to what has made Nike great for all these years.

Our relentless flow of innovation is one of the reasons I remain so confident in Nike's future.

Innovation comes in many forms, from improving a basketball sneaker's performance over multiple decades to creating new products such as fitness trackers and synthetic materials for athletic wear. Some businesses, mostly those selling consumer staples, might require no innovation to thrive for many decades. Others, in the technology space, need to constantly reinvent themselves to stay relevant. Nike falls somewhere in the middle.

The sneakers that basketball players wear today are a reasonable approximation of those worn in the 1950s. They have a sole, laces, and a tongue. While the materials used may have changed, a player from the 50s wouldn't feel too out of place putting on a pair of Air Jordan's. Nike's excellence has come from years of making incremental improvements to its products. Cleats that won't get clogged with mud, running soles that expand on impact with the ground, and ultra lightweight basketball sneakers are just a few of the more recent innovations.

Trying to explain to a 1950s basketball player about a smartphone, especially one equipped with the Nike+ app and its on-demand coaching, would be a difficult endeavor. Nike succeeds because it is an innovative technology company -- from its sneaker materials to its fitness app -- selling commodity products (t-shirts, shorts, and sneakers) that won't be disrupted any time soon.

We kicked off the incredible sports moments ahead of us this summer by unveiling bold national Olympic uniforms across Track and Field, Basketball and Football.

Brand strength is a powerful business advantage. A well known cola company can sell its product, which is largely the same formulaically as the generic version next to it, for twice as much. Nike sells a sneaker endorsed by LeBron James for $150, while it sells a generic looking black pair for $55. Building up a brand can happen in a hurry by signing a Michael Jordan or Tiger Woods, or can happen over many years by constantly being in the public consciousness.

The quote above exemplifies Nike's commitment to the second type of brand building. Sure, it will sell a lot of Olympic jerseys to supporters of various countries' teams. But this is not where the real money is made. Having the Nike logo on the chests of the world's greatest athletes -- be it on the NBA hardwood, World Cup soccer pitch, Olympic Stadium, or elsewhere -- makes the brand synonymous with winning.

A weekend warrior might not be thinking about Usain Bolt, Michael Jordan, or Tiger Woods directly when he's buying running shoes or a golf club, but the brand is seeped in his subconscious. Brand Finance ranked the top 500 most valuable brands of 2015, and Nike came in at #31. This is up four spots from 2014 and pegs it as a more valuable brand than McDonalds, Pepsi, and American Express just to name a few. National Olympic uniforms are one way that Nike continues to stay in the public view and further strengthen its brand.

We expect that our EPS growth will be more heavily weighted toward the back half of FY17 ... as we invest in significant brand initiatives early in the fiscal year, including the Rio Olympics and the European Football Championships ...

A company should return all of its earnings to shareholders in the form of dividends or buybacks, unless there are better opportunities for reinvestment back into the business. Nike's first contract with Michael Jordan, signed in 1984, called for the budding star to earn $7 million over the following five years. This investment eventually led to the Jordan line of products that now contributes billions of dollars annually to Nike's top line. A shareholder receiving her portion of that $7 million would have been hard pressed to find an investment that delivered similar results.

Even as the company has grown to a market capitalization of over $100 billion it continues to invest in its long-term future. Huge capital spending at the Olympics, European Football Championships, and elsewhere are the seeds that will be harvested quarters and years down the road. Nike is not trying to improve results by squeezing out small inefficiencies but by continuing to invest in itself. A recently instituted, four year-$12 billion buyback plan, endorsement deals, spending on technological innovation, and advertising campaigns will allow Nike, and its stock, to reach even greater heights than it already has. 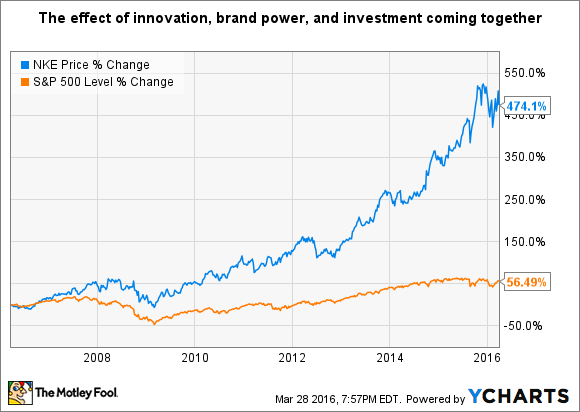 Innovation, brand power, and investments have gotten Nike this far and I expect the story to continue for many years to come. Take a deeper look to see how some shares of this great business might fit into your portfolio. I think you'll like what you see.