The upstream MLP agrees to sell its STACK/SCOOP assets for cash.

With time running out, and its liquidity running low, upstream MLP Vanguard Natural Resources (NASDAQ: VNR) announced it had sealed a deal to sell its assets in the STACK/SCOOP plays for $280 million. That cash will provide the company with a lot more financial flexibility, especially considering that its banks are expected to reduce the borrowing base on its credit facility next month. While the company isn't out of the woods just yet, it appears to have bought itself more time while it awaits an improvement in the oil and gas market. 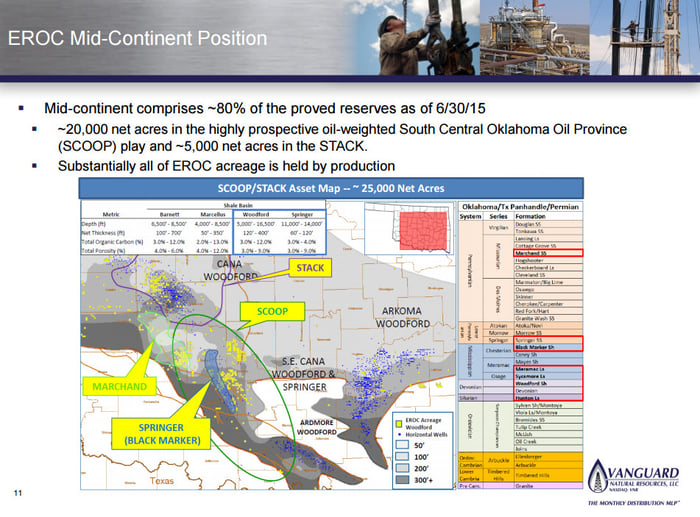 However, because these two plays were being developed horizontally, they really didn't fit within the upstream MLP structure of Vanguard Natural Resources. That's because the production from horizontal wells declines quite rapidly, while upstream MLPs prefer a more stable production profile in order to support shareholder distributions. That made these assets expendable.

That said, while these assets didn't fit within Vanguard Natural Resources' business model, they are a very important area of growth for the rest of the oil and gas industry. That's because the drilling returns are quite lucrative, even at current oil prices. It's why Devon Energy (DVN -5.84%) recently spent $1.9 billion to acquire a company with a prime position in the STACK play. Devon Energy paid that pretty penny because its acquisition target was earning a 40% internal rate of return on wells drilled at roughly a $40 oil price. In fact, Devon Energy paid a very generous $23,750 per acre for the 80,000 acres it acquired in the STACK last December.

Why it needed the cash
The company was so desperate to cash in on this acreage because it had nearly maxed out its credit facility. A combination of the mergers with Eagle Rock Energy Partners and LLR Energy, as well as previous asset acquisitions, led the company to borrow $1.69 billion of its $1.8 billion borrowing base as of the end of last year. That left it with a mere $107.5 million of undrawn capacity, which was down to just $96.6 million in early March after factoring in the borrowing base reduction as a result of its second lien bond exchange. That means it has used a whopping 94% of its credit facility.

The problem with this is the borrowing base is reset twice a year by its banks based on the value of its oil and gas reserves. Those reserve values have fallen significantly because of weaker oil and gas prices, which suggests its available credit will likewise need to be reduced. The concern is that its banks would reduce that amount by more than the $96.6 million it had remaining, which would trigger a clause forcing the company to repay the difference over the next six months.

However, in pulling in $280 million, the company has provided itself with a lot more breathing room. If that entire amount is used to pay down the facility, it will only have borrowed 78% of its capacity. That's still high, but it's something the company believes it can manage through since it will generate a lot of cash flow this year thanks to its strong oil and gas hedges.

Investor takeaway
While Vanguard Natural Resources isn't out of the woods, it has at least bought itself some breathing room. Now its fate lies in what its banks decide to do next month, and what oil prices do the rest of the year. If its banks are lenient and oil prices improve, it just might make it through this downturn without having to restructure in bankruptcy. However, if its banks cut deeply into its credit facility, or oil and gas prices crater, it could be game over for Vanguard Natural Resources and the rest of the upstream MLP sector.