Please ensure Javascript is enabled for purposes of website accessibility
Log In Help Join The Motley Fool
Free Article Join Over 1 Million Premium Members And Get More In-Depth Stock Guidance and Research
By Jay Yao - Apr 2, 2016 at 11:45AM

Despite the record inventories and oversupply in the markets, here are some reasons to be optimistic on the energy sector.

Crude prices have made a substantial comeback. After trading in the mid-$20s per barrel twice, WTI prices have rallied more than 45% and are now near $38 per barrel. Although inventories in Cushing, Oklahoma and elsewhere are still at or near record highs, there are several reasons to believe that the worst might be over for the essential energy commodity.

Some analysts think the unaccounted barrels might be in China or other non-OECD countries that don't record inventory very well. China is expanding its strategic oil reserves, after all. But China's strategic oil reserves aren't big enough to account for the difference, and the unaccounted oil could easily also be due to understated demand or overstated supply production. If a substantial percentage of the unaccounted barrels is due to increased demand or lower production, the eventual balancing of the market might occur sooner than many believe.

2. U.S. production is on a downward slope 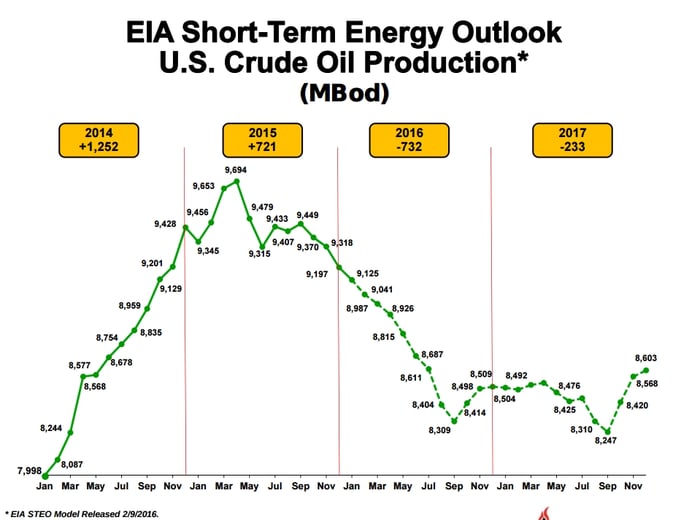 3. Crude demand is on an upward slope
Most importantly for the bull case, demand is rising. According to EIA projections, global demand for crude will grow by 1.1 million barrels per day in 2016 and another 1.2 million barrels per day in 2017. If global demand is just slightly higher than EIA projections, the current oversupply in the market will dissipate by the end of 2016 or the beginning of 2017. Although inventories would still be near record highs, the lack of spare capacity would justify crude prices substantially higher than $38 per barrel. 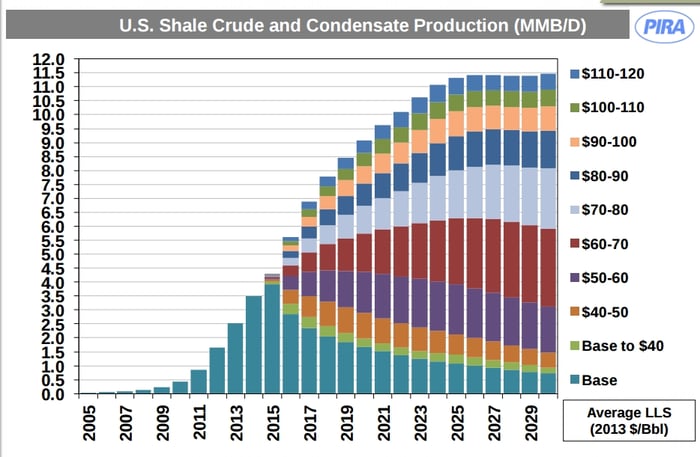 As the above chart shows, the shale industry will likely need higher than $38 per barrel prices for net production to grow. If prices rally, U.S. production isn't guaranteed to come back quickly either. Given that many shale companies lost a lot of money last year when prices rallied into the $60s and the companies expanded production only to see prices fall sharply shortly after, many companies will think twice before committing to expansionary capital expenditures this year. The industry will also need to hire back some of its laid off workers, which might also take some time.

Stocks that will benefit from the energy rebound
Among the energy companies that will benefit from the balancing of the market are Occidental Petroleum (OXY -5.36%), Chevron (CVX -3.43%), and Devon Energy (DVN -3.67%). Each company will realize more cash flow from higher crude prices. Occidental's operating cash flow is expected to increase by $100 million for each $1 rise in WTI, while Chevron's cash flow is expected to rise by around $325 million for every $1 increase in Brent. Devon Energy will probably realize more from its $2 billion to $3 billion in planned non-core divestments in 2016 if energy prices were higher.

If crude demand rises 1.1 million barrels per day in 2016 and a major part of the 800,000 unaccounted barrels per day is due to understated demand or overstated supply, many analysts believe crude prices will rally to $60 per barrel or higher. If prices rally to that point, Chevron will almost certainly be free cash flow positive by 2017, a goal the company has been targeting for some time now. Occidental will have enough cash flow to increase production and support its attractive dividend, and Devon will ramp up shale production in the Permian Basin substantially.

If demand growth falls short of expectations and U.S. shale supply doesn't decline as much as the EIA estimates, all three companies have the balance sheet strength and liquidity to tough out another year or two of sub-$40 per barrel prices. Chevron and Occidental pay dividends that yield over 4% at current prices and Devon Energy trades at a discount price relative to the quality of its assets.