While most of us likely have some spring cleaning to do now that April is upon us, it's also a great time to do a little spring cleaning in our portfolios as well. Despite the market clawing back to the same levels where we started the year, there are plenty of great companies out there with stock prices that look like they haven't quite woken up from winter hibernation.

We asked several of our contributors to highlight a stock that looks appealing to them this month. Here's what they had to say.

Daniel Miller
April might just bring a very intriguing opportunity to buy shares of what was a surging Volkswagen Group (VWAGY -3.46%) before its diesel emissions scandal rocked the company's foundation to its core. It's true: Volkswagen's scandal could end up costing the company tens of billions of dollars when it's all said and done, and the full extent of the pain isn't yet known. It's possible that when Volkswagen hosts its analyst conference on April 28, it will cut or suspend its dividend, a move that would certainly send its stock price even lower.

But that might be an opportunity for long-term investors. There are a couple of reasons Volkswagen is an intriguing investment for those with a higher risk tolerance. One thing to consider is that Volkswagen's scandal is, in my opinion, less devastating than General Motors' recent ignition switch problem that led to dozens of deaths and even more injuries, and led to nearly three times the amount of vehicles recalled globally. Yet GM has fully recovered in a matter of a couple of years. The same argument could be made for Toyota's unintended acceleration problem, which also caused tragic deaths.

It's not crazy to think that Volkswagen's recall will follow the same pattern. Furthermore, while the negative publicity has infused volatility into its stock price, Volkswagen's global sales have only declined 0.5% during 2016, through February -- that's roughly 5,000 units.

Sure, uncertainty hangs over Volkswagen at the moment, and the total cost in terms of fines and penalties has yet to be defined, but there's a track record of major automakers recovering quickly from events such as this. There's no reason to think Volkswagen won't be the next candidate.

Sean Williams
If you're looking for a top stock in April, I'd encourage you to take a closer look at Teva Pharmaceutical Industries (TEVA 4.35%).

Teva Pharmaceutical is a hybrid drug developer in that it generates substantial revenue from a line of branded drugs as well as generic products. Branded drugs provide the juiciest margins, but they come with the drawback of having finite periods of patent exclusivity. Conversely, generic drugs have lower margins, which is a direct correlation to their cheaper price points, but there's an endless sea of generic opportunities with branded drugs constantly coming off patent. Additionally, we're on track to see generic drug prescription growth over the long term in the United States.

Teva has taken a lot of heat recently for the patent expiration of multiple sclerosis blockbuster injection Copaxone. At one time, Copaxone contributed more than 20% of Teva's annual sales. However, Teva hasn't been sitting on its hands. It introduced an extended-release version of Copaxone that's aimed at keeping Copaxone sales within the family, so to speak. Physicians and patients have become accustomed to using Copaxone, so this new formulation should allow Teva to keep a decent chunk of its prior sales when generic Copaxone swarms pharmacy shelves.

More important, Teva is in the process of acquiring Allergan's generic drug business for more than $40 billion. Following completion of this deal, Teva will cement its spot as the No. 1 generic drug developer in the world. Even if Teva's margins take a hit, the company is liable to make up the difference in sheer volume.

Down almost 15% year to date and expected to grow its full-year EPS by a high single-digit percentage through 2020, Teva Pharmaceutical appears to be a top buy to consider.

Tyler Crowe
I feel like I've been pounding my fist on the table for a while on this one, but Enterprise Products Partners (EPD 1.20%) continues to be a bargain at today's prices for anyone looking to add a solid income payer to their portfolio.

Despite the downturn in oil prices, Enterprise has built its business in such a way that it doesn't rely much on the price of oil or gas and has enough flexibility in its pipeline and logistics network that it can handle a modest drop in volume. Over the past two years, as oil and gas prices have declined more than 60%, Enterprise has been able to modestly grow EBITDA and distributable cash flow -- the important figures for investors, as they dictate the payout. 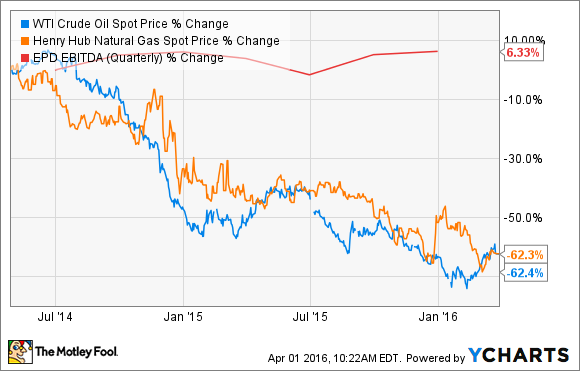 Also, as Wall Street has soured on master limited partnerships, it has made it difficult for these types of companies to raise the capital they need through equity raises to grow the business. That isn't really the case with Enterprise, since its management has consistently retained excess cash flow to spend on growth. This allows the company to grow without diluting investors' stake and reduces the need to raise capital through debt or equity. All of this leads to a more sustainable business that is much less at risk of a payout cut.

Even though Enterprise is well above the fray in the master limited partnership space, shares are still down 41% from their highs before the decline of oil prices. Today, shares are sporting a distribution yield of 6.5%. As long as shares remain this cheap, I'll stick to my guns and say Enterprise is a great company to buy.

Steve Symington
Despite it enjoying a big pop following its strong fiscal fourth-quarter results as March came to a close, I think lululemon athletica (LULU -5.57%) is a compelling buy for long-term investors looking to put money to work in April. More specifically, Lululemon just finished a strong year in which it dispelled concerns over whether the yoga and athletic apparel company's turnaround efforts are proceeding as planned.

This wasn't terribly surprising in retrospect. Lululemon did, after all, increase its fourth-quarter guidance more than two months ago after capping off a particularly strong holiday season, calling for earnings of $0.78 to $0.80 per share, and revenue of $690 million to $695 million. But when all was said and done in Q4, revenue grew an even better-than-expected 17% (22% at constant currency), to $704.3 million. That result was driven not only by particularly impressive 28% growth in higher-margin direct-to-consumer revenue, which comprised around 20.8% of total sales, but also a 33% increase in online sales. Within that, Lululemon saw 19% comparable-store sales growth from its core women's bottoms business, and 24% comps from its much smaller men's category, bringing the latter to 10 consecutive quarters of at least 20% growth.

That said, net income per share increased a more modest 9%, to $0.85. And gross margin remained under pressure during the quarter, falling to 50.3% from 51.5% in the same year-ago period. But that was actually better than the 49% to 50% range management told investors to expect three months ago. And overall, this outperformance represents a notable acceleration in top- and bottom-line growth -- even as Lululemon works to improve its supply chain and bring down elevated inventory levels.

Lululemon now anticipates gross margin will be around 47% in the first quarter as it continues to reduce inventories, then it will reach an inflection point beginning in the second quarter. Combined with positive momentum across its business, this should serve to drive sustained, profitable growth going forward.

Neha Chamaria
Railroads may not look like a top investment opportunity right now given the drop in shipments for metals, coal, and oil, but Canadian National Railway (CNI -0.43%) continues to make money and reward shareholders even in a downturn. In 2015, Canadian National's operating and net income grew 14% and 12%, respectively, despite a 2% drop in carloads. But the biggest reason Canadian National stands out from the crowd is the consistent improvement in its efficiency.

Canadian National's focus on greater efficiency should pay rich rewards when shipment volumes from mining and oil industries pick up. At the same time, the company is setting itself up for steady growth in coming years: It plans to invest CA$2.9 billion just this year on infrastructure and equipment. Canadian National improved its operating ratio -- a key measure of railroad efficiency that compares operating expenses to sales -- to 58.2% in 2015, among the lowest in the industry. CSX Corporation's operating ratio, for example, came in at 69.7% last year, breaking the 70% mark for the first time. Canadian National's case gets all the more stronger when you consider that CSX is targeting an operating ratio in the mid-60s in the longer term.

These investments, combined with Canadian National's aggressive share buybacks and target dividend payout ratio of 35% (it currently pays out roughly 28% of its profits) should continue to earn shareholders greater returns in the near future. The best part? The stock's trading at only 12 times forward earnings, offering a lot of room for growth going forward.