The number of vehicles created per region are shrinking, but that doesn't mean one size fits all.

Investors know that Ford Motor Company (F 2.86%) and General Motors (GM 3.04%) are printing money right now because full-size trucks and SUVs are selling incredibly well. But, another reason for their improved financial success has been the consolidation of vehicle platforms and the ability to create a more globalized vehicle portfolio. It's much more profitable to make vehicles like the Focus, Fusion, and Escape, which can sell well globally, rather than making a different type of vehicle for the U.S. market, the European market, and the increasingly large whale that is China. That's at least the goal, as one might imagine - globally acceptable cars are a bit tricky to pull off for just about everyone.

However, that doesn't mean that automakers can't make subtle tweaks that make a big difference, and that's exactly what Detroit's two largest automakers have figured out in China.

The road ahead
It's no secret that China's auto market was the driving force behind the Lincoln Continental's design. And just in case we needed anymore confirmation, the Continental's "chauffeur" button, which opens up even more space in the back seating area, does just that. That's a direct aim for the Chinese businessman who prefers to work while being driven around.

The attention to detail aimed to improve Lincoln vehicles in the eyes of Chinese consumers goes even further than that. Consider that the leather found in the Continental vehicles will be more tightly attached to the seats because Chinese consumers find the thick, plush seats Americans prefer as sloppy, according to Automotive News. And that new-car smell everyone loves here in America? Yeah, Chinese consumers hate that, too, so consider it gone.

But those small things make a big difference for Lincoln, which is trying to gain market share in the Chinese market. The good news is that Lincoln's attention to detail is working, and the Continental's launch in China this year should only further that success. Consider that three of Lincoln's top dealerships globally in terms of sales are located in the People's Republic of China (PROC), despite the overall market itself accounting for a small fraction of total global sales.

Last year was Lincoln's first full year of sales in the PROC, and it tallied more than 11,500 units sold. While that figure is roughly a tenth of what it sells in the U.S. market, it should accelerate going forward as Lincoln expands its number of dealerships from 33 to 60, operating in 50 different cities, by the end of this year. The good news is that Ford has apparently figured the market out with its namesake Ford brand -- as you can see in the four-year sales period from 2012-2015 -- now it just needs to clone that success with its luxury brand. 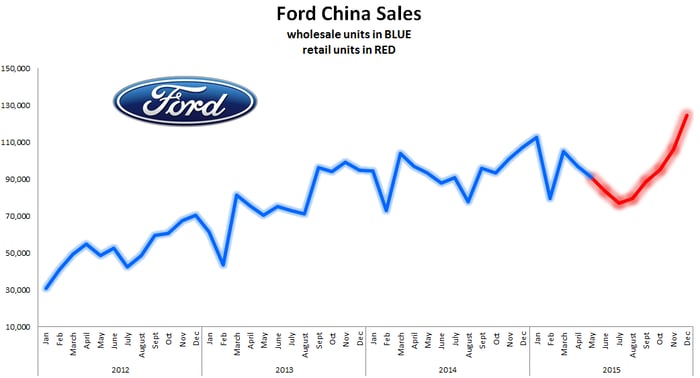 Ford isn't the only Detroit automaker savvy to the attention-to-detail strategy needed in China. General Motors (GM 3.04%) has retaken the throne of the largest foreign automaker in China, and it has some tricks up its sleeve for the Buick Envision.

Each Envision that's planned to be shipped to China will receive a change in steering calibration, front suspension, and brake rotors. Chinese Envision consumers will also get size downs from 19-inch wheels to 17-inch wheels and a smaller 1.5-liter turbocharged engine compared to America's 2.0-liter turbo.

"The overall vehicle was designed with a lot of commonality that benefits all," Buick spokesman Stuart Fowle told Automotive News via email, "like making rear passenger room a priority and giving a big focus to durability testing that helps on rough roads in developing countries and makes a stronger, higher quality vehicle for those of us with good roads."

What it all comes down to
China will be critical if Lincoln is to achieve its goal of tripling sales from 100,000 in 2013 to 300,000 by 2020. Further, it's more important for Detroit automakers to excel with their luxury lineups in China, because competing in Europe against the country's home-grown luxury juggernauts is a pipe dream for now.

With luxury vehicles accounting for only about 10% of global sales, yet almost one-third of industry profits, it's easy to follow the money -- and if that means something as small as removing the new-car smell, investors will be glad Ford and GM know to do so.