J.C. Penney is taking steps to grab sales from Sears.

Retail is a competitive industry. No one knows that better than Sears Holdings (SHLDQ), whose management has presided over a stunning implosion of value. A generation ago, Sears was the No. 1 retailer in the U.S. Today, it's on the brink of bankruptcy after years of falling sales and massive operating losses. 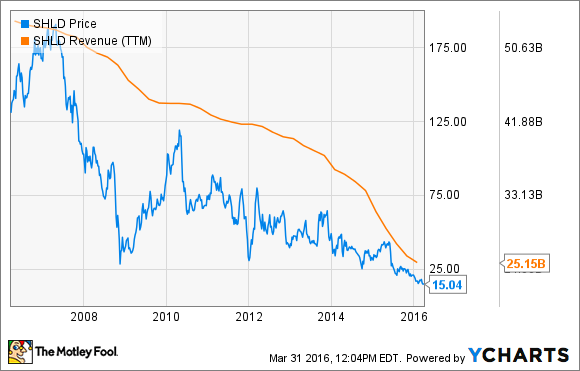 As the chart above shows, both revenue and share price have collapsed over the past decade. Part of that decline is owed to spinning off business like Lands End, Sears Canada, and Sears Hometown and Outlet, but a significant portion is thanks to store closures and several years of comparable sales declines.The figure fell by 9.2% last year, signaling that Sears' consumer appeal is worsening. The company also closed 53 stores out of 1,725 last year.

As Sears unravels, it is shedding billions of dollars in sales, leaving that money up for grabs for its retail rivals. Still, with $25 billion in sales, the company remains a force in retail, ranking just behind No. 1 department store chain Macy's (M 1.16%), with $28 billion in revenue last year.

When opportunity knocks
No one in the retail industry is better positioned to take advantage of Sears' misfortune than J.C. Penney (JCPN.Q). Both retailers target the same customer -- middle-income Americans -- and the two often even occupy the same malls. As of 2014, nearly half of the 1,050 malls across the country counted both Sears and J.C. Penney as anchors. As Sears' stores become less appealing to customers, many of them are likely to check out the Penney's on the other side of the mall.

J.C. Penney has spotted this opportunity and recently entered a segment that's been one of Sears' last remaining strengths: appliances. Sears' has been gradually losing its leadership in appliances, a retail category it helped pioneer with popular brands like Kenmore. Sears claimed about a quarter of market share in appliances as of September, down from 33% a decade earlier, but home improvement giants Lowe's (LOW 0.84%) and Home Depot (HD -0.40%) are fast gaining on it.

Smelling an opportunity, J.C. Penney recently threw its hat into the ring with a pilot program testing appliance sales at 22 stores. It's the first time the company has sold dishwashers, stoves, and other such contraptions in 30 years. The decision was in part driven by data as management noticed that an increasing number of customers were searching for appliances on its website. In fact, it was the most searched-for item that the company didn't carry. The pilot program launched February 1.

With just $12.6 billion in revenue last year, the opportunity for Penney's in appliances -- and grabbing some of Sears' sales -- is much greater than for Lowe's or Home Depot, whose annual sales are several times that figure. Sears posted over $10 billion in sales in its hardlines segment last year, which includes appliances. For J.C. Penney to take even a small portion of that would have a meaningful impact on its bottom line.

Turning the tables
At one point, it was Macy's who was benefiting from J.C. Penney's collapse. In 2012, as Penney's saw comparable sales plummet by 25%, Macy's grew earnings per share 20%, and its stock surged. As the chart below shows, the two stocks have tended to move opposite one another, and Macy's acknowledged that it gained traffic from Penney's woes. 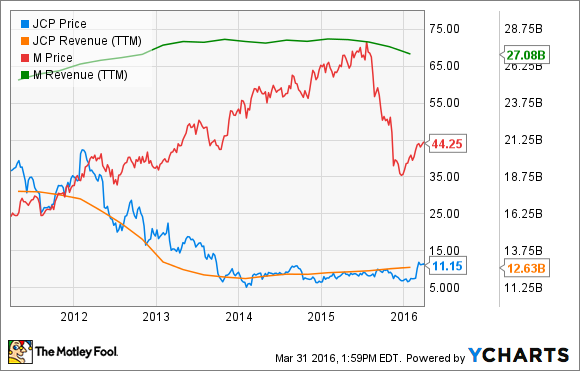 It's clear, then, that one department's store chain's performance affects another in this highly competitive industry. J.C. Penney now has a golden opportunity to take sales from a struggling Sears. Look for the company to expand its appliance program and to target other weaknesses in its decaying rival.