Please ensure Javascript is enabled for purposes of website accessibility
Log In Help Join The Motley Fool
Free Article Join Over 1 Million Premium Members And Get More In-Depth Stock Guidance and Research
By Reuben Gregg Brewer - Apr 4, 2016 at 10:15AM

Cameco is the world's largest publicly traded uranium miner, and that changes some things on the risk front.

Cameco Corporation (CCJ 1.52%) isn't your typical miner. That's because it's focused on uranium, the fuel used in nuclear power plants. That adds a twist to the typical risks a commodity-dependent miner would face. Here's what you need to know to find out how safe Cameco Corporation stock is.

What every miner deals with
Before getting into what makes Cameco different, it's worth spending a moment to discuss how it isn't unique at all. That's because, despite what Cameco pulls out of the ground, it's still a miner. That means it needs to keep a tight lid on its production costs, it has to deal with the risks of operating mines (for example, a cave in at one of its mines disrupted operations late last year), and what it sells is a commodity, so its revenues can be highly variable. 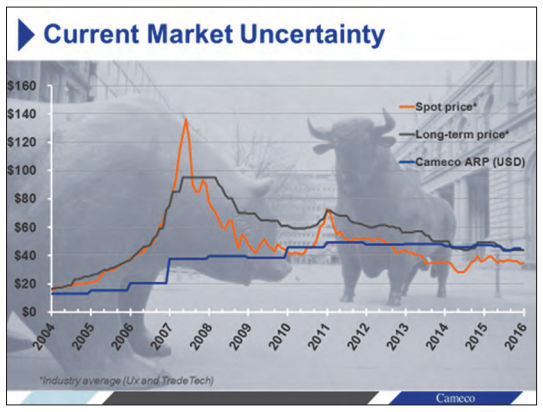 As it stands, Cameco isn't even unique. For example, Rio Tinto (RIO 0.87%) also mines for uranium; it's just that the nuclear fuel makes up only around 1% of the giant global miner's revenues. On the other side of the spectrum are companies such as Energy Fuels Inc, which is focused on uranium, but with a roughly $100 million market cap, it's tiny compared with Cameco and its $5 billion market cap. To put that in a different light, Energy Fuels sold around 1 million pounds of uranium last year while Cameco sold 32 million pounds.

The upshot is that Cameco is a miner at its core, which exposes it to all the risks a miner has to deal with. And it isn't the only company mining uranium, but it is probably the best option for most investors looking for exposure to the nuclear fuel because of its focus and scale.

Uranium, no love
That said, nuclear power has been a tough sell since the Fukushima disaster in Japan. Japan shut its reactor fleet after the meltdown (though it's starting power plants back up again now), and Germany decided to phase out the power source. But the impact of all of this was twofold.

First, demand was dealt a blow and uranium prices fell. That, however, falls largely into the supply/demand dynamic that affects all miners. The difference, of course, being that a single event had an outsize impact on the entire uranium market. And that brings up one little wrinkle that you can't overlook at Cameco or any other uranium or nuclear power investment.

Nuclear power plants, and the companies that provide the fuel for them, have to deal with a pretty big image problem. Although the vast majority of the time nuclear power plants run safely and provide reliable and clean power, when something goes wrong, it goes wrong in a big way. It's similar to the aviation industry. Most flights are safe, but when there's a crash, it's usually catastrophic.

So Fukushima and the impact it has had on the uranium market is important to keep in the back of your mind. To put some perspective on this, Cameco's revenues have been stuck in neutral since the early 2011 event. More important, any future nuclear power incidents could have an outsize impact on the nuclear power industry and Cameco. That's a risk you have to go in willing to bear.

What about the long term?
The flip side of that is that nuclear power doesn't emit carbon dioxide, which makes it a relatively clean fuel. In a world trying to move away from carbon-based fuels, it's a pretty good option for base-load power. That's particularly true in fast-growing China and India.

To put some numbers on that, China currently has around 20 operating nuclear reactors but plans to have 85 or so by 2020. India has 21 reactors, with six under construction right now. Cameco has supply contracts with both countries, the India deal being inked only last year. Nuclear power investments in these two nations should, over the long term, materially boost worldwide demand. 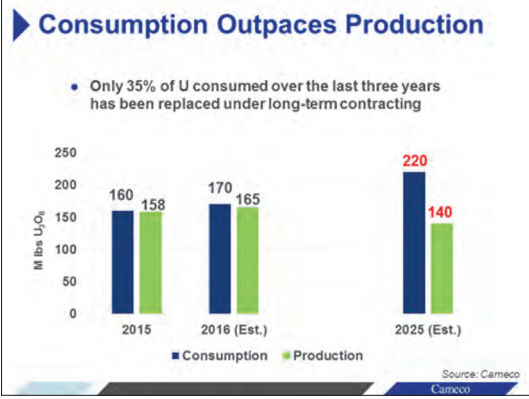 In fact, Cameco estimates that uranium consumption is outstripping demand even today, a situation that will get much worse in the very near future as new power plants come on line. If supply and demand play out as you'd expect, that should help push uranium prices higher. And Cameco has a number of assets sitting in the wings waiting to be developed so it can expand production as needed.

So, in some ways, the fundamentals for uranium look pretty solid, and that provides a solid underpinning to Cameco's long-term prospects.

What about today?
Those are the big-picture risks and potential rewards that you have to balance when looking at Cameco. But here's one more thing to consider: Despite the weak uranium market today, Cameco has been profitable in each of the past 10 years. And while its dividend has been stuck at $0.40 a year per share since 2011, it hasn't been cut, either. So despite the troubles uranium has faced, Cameco's business has held up well. Does that mean there's no risk? No, clearly that's not true. But if you're looking long-term, Cameco looks like a survivor and may just be the best way to play the future of global nuclear power -- warts and all.