Please ensure Javascript is enabled for purposes of website accessibility
Log In Help Join The Motley Fool
Free Article Join Over 1 Million Premium Members And Get More In-Depth Stock Guidance and Research
By Reuben Gregg Brewer - Apr 4, 2016 at 10:45AM

Royal Gold is in the precious-metals space, but it's not a miner, and that changes things a lot.

Streaming it
Miners run big, expensive, and risky operations. It takes a lot of time and money to build a mine and keep it running. And there are all sorts of risks involved, including things such as cave-ins and even the waste dam rupture disaster that occurred in Brazil at the Samarco Mine. In all, being a miner is a risky business. That's why Royal Gold doesn't do it.

What Royal Gold does do is provide money up front to miners for the right to buy gold and silver in the future at reduced prices. This is a process called streaming. It also buys royalty interests in mines, which is roughly similar to streaming. Miners use the cash to pay for exploration and expansion or to just shore up their balance sheets, one of the most frequent uses of these deals lately. But it's really the closest thing to a win/win there is because Royal Gold doesn't have to mine but still gets access to gold and silver on the cheap. Miners, meanwhile, raise cash without having to issue stock or debt, or having to go to a bank.

So, on the very surface, Royal Gold is a great way to invest in gold and silver without having to take on all the risks of owning a mining company. 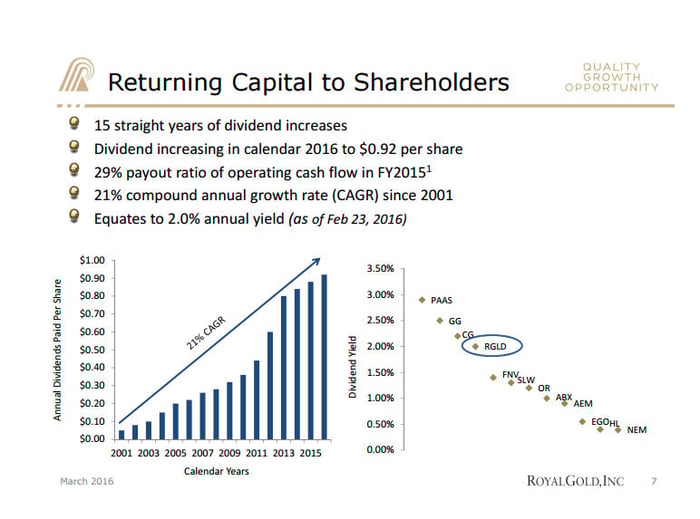 Look at that dividend grow!
Another important thing to notice about Royal Gold is the company's impressive streak of dividend increases -- dating back to 2001. That's 15 consecutive years of annual dividend increases. A streak that's lasted right through the commodity downturn, by the way. In fact, that's a far more impressive record than Silver Wheaton (WPM -0.08%), one of the better-known streaming companies. Silver Wheaton's dividend is tied to the cash generated by its business and has been falling for a couple of years.

Franco-Nevada (FNV -0.36%), another streaming competitor, has an eight-year streak going, which is nice, but still not at the level of Royal Gold. And Royal Gold yields more than either of these competitors, with around a 1.8% yield. Silver Wheaton's yield is 1.2% or so, and Franco-Nevada's is roughly 1.4%.

To be fair, a dividend in and of itself doesn't make a stock safe. For example, in good times Silver Wheaton's dividend model might pay you more. You could easily argue that in a commodity market, being able to shift the dividend up and down is a safer business practice. However, if you're looking for a consistent dividend, Royal Gold is the standout performer. So a lot depends on your definition of safety.

It's still gold
Now, those two positives need to be juxtaposed against some negatives. Even though Royal Gold isn't a miner and it's managed to increase its dividend each year for a decade and a half, it's still tied to gold and silver prices. Often volatile precious-metals markets, then, are still a key factor to watch, and there's not a whole lot Royal Gold can do to change this dynamic. 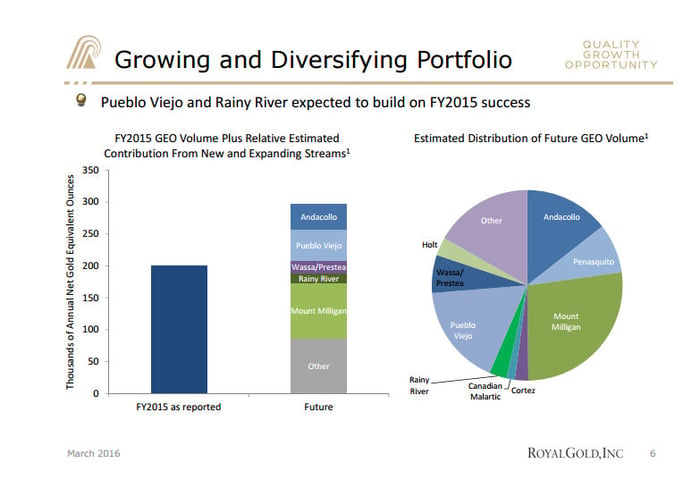 Moreover, although Royal Gold isn't running mines, it still has to deal with some risks. For example, some of the investments it makes are in mines that are being built or in expansion projects. If a project doesn't work out, Royal Gold's investment could prove to be, well, less than desirable. And if a mine that's up and running hits a snag, it could reduce the amount of gold and silver that Royal Gold gets from its deal. Portfolio diversification is how the company tries to deal with this issue, but it's one to monitor just the same.

When all is said and done, however, Royal Gold is a pretty good option for income investors looking at the precious-metals space. It clearly has a dedication to returning value to shareholders via regular dividend increases, and it avoids the direct risks of running mines. Sure, it's still a precious-metals company and there's not much that can be done about that, but for risk-averse investors seeking steady income, it might just be one of the best ways to play gold and silver today.