Please ensure Javascript is enabled for purposes of website accessibility
Log In Help Join The Motley Fool
Free Article Join Over 1 Million Premium Members And Get More In-Depth Stock Guidance and Research
By Demitri Kalogeropoulos - Apr 4, 2016 at 8:27AM

On tap for investors over the next few trading days: An important update from the Federal Reserve, and three key earnings announcements. 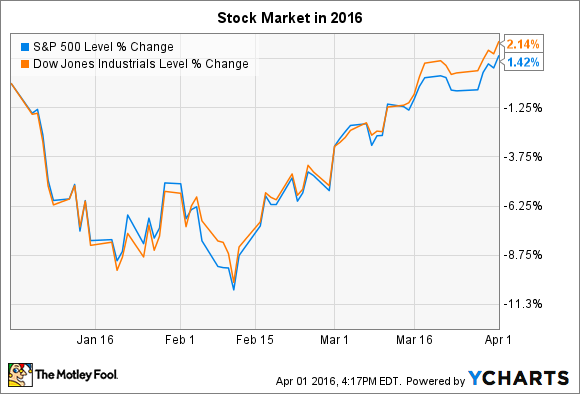 For the week ahead, investors can expect volatility around the Federal Reserve's data release set for 2 p.m. EST on Wednesday, when the central bank publishes minutes from its March monetary policy meeting. That meeting produced a forecast of two quarter-point interest rate hikes in 2016, and investors will be scrutinizing the minutes for clues to the Fed's thinking on supporting economic growth while keeping inflation in check.

Tuesday, April 5 -- Darden Restaurants' customer traffic
Darden Restaurants, owner of national sit-down chains such as Olive Garden and LongHorn Steakhouse, will post its fiscal-third-quarter results before the opening bell on Tuesday. The company in early March pre-announced a few operational highlights, including achieving 6% comparable-store sales growth (marking an acceleration from the prior quarter's 2% uptick), and adjusted earnings of about $1.19 per share (20% above last year's result).

In Tuesday's release, investors will be interested in Darden's customer traffic figures. Those trended lower at both Olive Garden and LongHorn in November, and while increased menu prices made up for the drop, the company needs to continuously fill its booths if it hopes to keep its turnaround momentum going strong.

Wednesday, April 6 -- Constellation Brands' beer sales
Constellation Brands posts quarterly results on Wednesday morning that will close out what's expected to be a banner fiscal year for the alcoholic-beverage giant. Last quarter, sales jumped 6% higher as operating income soared 15%, to reach $476 million, as the beer business took off. In fact, beer shipments, led by Corona and Model brands, are up 12% during the last nine months, trouncing Constellation's 6% uptick in wine and spirit volumes.

In January, CEO Rob Sands and his executive team forecast 23% profit growth for fiscal 2016 that will be powered by double-digit gains in the beer business. The long-term outlook for that segment is improving, as well, thanks to two new breweries that will start contributing to results soon.

Thursday, April 7 -- CarMax's used-car volume
On Thursday, auto retailer CarMax hopes to bounce back from weakening operating results that have helped push shares 25% lower during the last year. Three months ago, the company posted what CEO Tom Folliard admitted was a "challenging sales quarter" in which comparable-store sales fell 1% on declining traffic at its dealerships. Gross profit per used vehicle was flat, at $2,200. That result, plus increased advertising costs, produced a 1.3% decline in net income, to $128 million.

Consensus estimates call for a similarly sluggish result for the fourth quarter. Revenue should rise by 4.7% for a minor improvement over the prior quarter's 4% uptick. Earnings per share will grow 6%, Wall Street believes, but mainly because of stock repurchases.

CarMax investors can expect a CEO transition sometime this year, as Folliard has announced he will retire before the end of 2016 to be replaced by fellow executive Bill Nash. Folliard called the incoming leader "the right choice to guide CarMax through the next phase of our growth and development," which includes expanding into new markets including Seattle, San Francisco, and New York City in the coming years.