Please ensure Javascript is enabled for purposes of website accessibility
Log In Help Join The Motley Fool
Free Article Join Over 1 Million Premium Members And Get More In-Depth Stock Guidance and Research
By Daniel B. Kline - Apr 4, 2016 at 5:06PM

The company scored with Chicken Fries and Nutella pastry pockets in 2015. 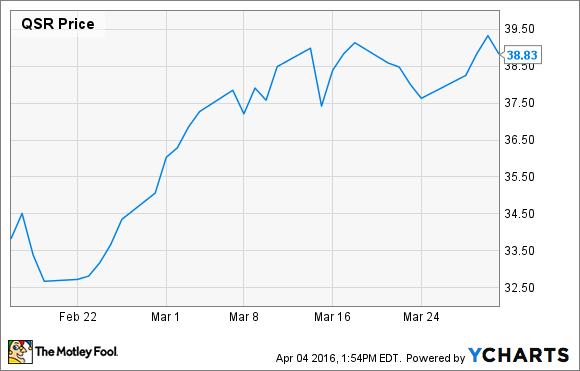 What: While the company's share price sputtered a big after it reported, by it Feb. 29, it was at $35.06w and on a steady upward climb. Though it had some ups and downs in the second half of March,  shares finished trading on March 31 at $38.83, a 10.75% increase for the month according to data provided by S&P Global Market Intelligence.

So what: While the quick-serve industry as a whole has had its struggles, the two RBI brands ended 2015 strongly. For Q4, 2015 Tim Hortons saw its comparable-store sales grow by 6.3% while Burger King's climbed 3.9%. That capped a year when the coffee chain saw a comparable sales increase of 5.6% while the burger eatery jumped by 5.4%.

"We had a great first year as RBI, finishing the fourth quarter with strong results at both of our iconic brands, Tim Hortons and Burger King. Successful product launches combined with significant net restaurant growth drove performance this year and our franchisees achieved meaningful levels of profitability, said RBI CEO Daniel Schwartz in the earnings release. "We continue to be excited about future opportunities at Tim Hortons and Burger King and are committed to building long-term sustainable growth for years to come."

Now what: RBI has been very clever in managing these brands to produce results this strong. Burger King specifically has been paced by non-traditional products like Chicken Fries, which have largely hit the mark. Tim Hortons was also paced by innovation, specifically its Nutella pockets and grilled wraps. It also performed well in its core beverage area -- a market where there is intense competition.

These are great numbers, but going forward, the company needs to continue to both innovate and manage well in order to keep delivering this type of growth in a space where competition from fast casual chains creates a lot of pressure. That's a big challenge going forward, as new fast food offerings tend to be hit or miss.

Under RBI, both Burger King and Tim Hortons have hit more often than they have missed and it's possible both brands will keep that up in 2016.