Please ensure Javascript is enabled for purposes of website accessibility
Log In Help Join The Motley Fool
Free Article Join Over 1 Million Premium Members And Get More In-Depth Stock Guidance and Research
By Matthew DiLallo - Apr 4, 2016 at 9:10AM

What: Shares of Whiting Petroleum (WLL) enjoyed an epic run in March, ending the month up a stunning 83.5%: 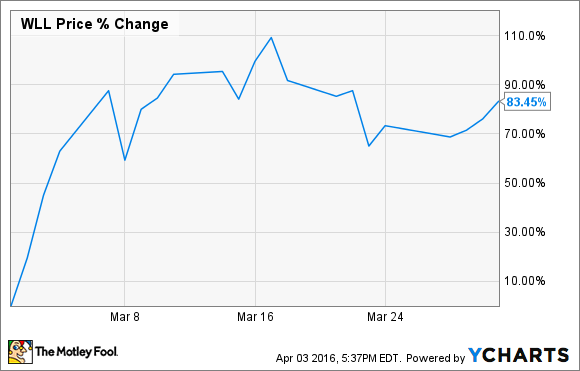 So what: Whiting Petroleum's amazing run in March came in spite of the fact that there was absolutely no positive company-specific news. In fact, not one but two analysts downgraded the stock last month, with J.P. Morgan downgrading it from overweight to neutral while Seaport Global cut it to sell. Both downgrades were specific to the company and not just blanket downgrades -- J.P. Morgan upgraded fellow Bakken rival Oasis Petroleum (OAS) to overweight while Seaport Global upgraded Continental Resources (CLR 0.12%) to buy in the same reports they downgraded Whiting.

Instead, what fueled Whiting Petroleum's surge in March was a short-covering rally that was driven by a 14% surge in crude. Oil enjoyed its best monthly performance in a year after talk of an output freeze between OPEC and Russia started to heat up. This caused short-sellers to run for the exits. That was clear by looking at the data after Whiting Petroleum saw its short count drop from 52.1 million shares in mid-February to 46.5 million shares just 30 days later, which still amounted to 22.9% of its shares sold short.

Whiting Petroleum was far from the only heavily shorted Bakken driller to see its stock spike last month after short-sellers bought shares hand over fist in order to cover short bets before they blew up. Both Continental Resources and Oasis Petroleum jumped 30% last month after short-sellers closed their positions. That's after Continental Resources saw its shares sold short drop from 30.1 million to 24.8 million, which was still 29% of its outstanding shares while Oasis Petroleum's short count fell from 38.7 million to 34.5 million, or 22.1% of its outstanding shares.

Now what: Despite rising 14% last month, crude oil is still well below the $50 breakeven point Whiting Petroleum needs just so that it can tread water and maintain its production. Because of that, last month's rally could quickly fade away if oil prices reverse course. In other words, this company is not out of the woods just yet.