While Ford's sales gains in total looked great, there are quite a few additional things to consider.

Brushing aside concerns of peak auto sales -- if only briefly -- Ford Motor Company (F -3.33%) posted its best March U.S. sales in a decade, and its best first-quarter sales results since 2006. Ford's total sales reached 254,711 units, which was an 8% gain over last year's March, and its first-quarter sales totaled 645,626 units, an even better 9% gain over the same period during 2015.

Beyond the top-line sales figures, there was some very interesting data in Ford's March figures. Here are three important takeaways.

Those figures are higher than normal when you consider fleet sales accounted for only 29% of Ford's total sales during last year's March. That broke down to a healthy 12% commercial, 5% government, and 12% daily rental.

One month doesn't make a trend, but this has been consistent throughout Ford's first quarter. During the first three months of 2016, fleet generated 36% of total sales, which broke down to 13% commercial, 6% government, and 17% daily rental.

Ford's management has openly acknowledged the rise in fleet sales, and notes that the sales will taper off significantly in the second half of 2016; but it's worth watching, and needs to be understood when considering total sales gains.

Lincoln posts another solid month
Don't look now, but Ford's Lincoln luxury lineup, which has struggled during the past decade, has posted an excellent first quarter. Not surprisingly, Lincoln's gains were driven by SUVs, which posted a 28% gain in sales compared to last March. This offset an 11% decline in its car sales for a total gain of 11%. That was good enough to mark the brand's best March performance for SUVs in 15 years.

The story holds true throughout the first quarter, with Lincoln utilities selling 27% more vehicles. This helped haul the entire brand's sales 16% higher compared to last year's first quarter. With rising SUV sales comes rising average transaction prices, too. Lincoln's average transaction prices were up more than $2,100 in March, almost four times the rate of growth of the overall luxury segment, according to Ford.

Familiar story, but still impressive
We know SUVs and full-size trucks are selling well; that's been the case for over a year now. However, some of the stats from Ford's March are still very impressive, and worth noting. Take Ford's most-profitable product, the F-Series, which recorded 73,884 units sold in March. This was the first time F-Series topped 70,000 this early in the year since 2007. 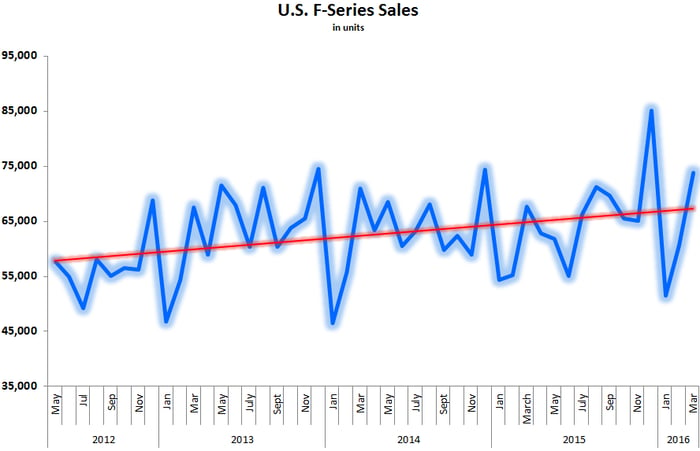 Ford's SUVs accounted for almost 73,000 sales during March, the segment's best March performance in 15 years. Also, throughout the first quarter, SUVs accounted for more than 188,000 units sold, which was good for a 15% gain, and the best start in company history, according to Ford. With accelerating sales of larger and more-expensive vehicles, Ford's average transaction prices jumped by more than $1,600 per vehicle in March, which was nearly double the industry average.

Lastly, I'll give you a small bonus factor to consider. Ford ended March with about 754,000 vehicles in inventory, which is roughly equal to 80 days of supply. That's higher than the historical industry norm of 60 days, but Ford's inventory isn't a concern for investors.

We have to consider the seasonality, as Ford always builds up a large inventory of vehicles during the winter -- Ford ended January with 104 days supply -- and sells them down during the spring and summer season. Ford struggled to maintain enough inventory last year, and management believes the low inventory cost the automaker some market share.

Ultimately, Ford's inventory is just where it should be. It's fleet sales are a bit higher than normal, but not yet a concern, and SUVs and trucks continue to rake in the big bucks. It's just another month in the books for the folks at the Blue Oval.