Please ensure Javascript is enabled for purposes of website accessibility
Log In Help Join The Motley Fool
Free Article Join Over 1 Million Premium Members And Get More In-Depth Stock Guidance and Research
By Daniel B. Kline - Apr 5, 2016 at 10:15AM

The company has finally given into public pressure and will get rid of its signature killer whales.

Since the 2013 documentary Blackfish highlighted how it treats the killer whales (Orcas) it holds in captivity SeaWorld Entertainment (SEAS -3.43%) has been reeling. 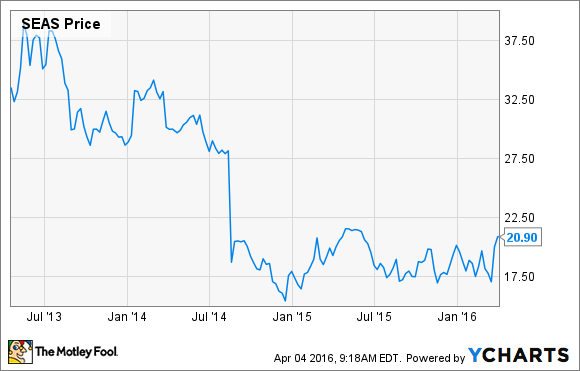 What: The controversy over the Orca, the animal which SeaWorld tied its identity to, has been very bad for the chain. That's not the only reason its stock has suffered -- new attractions at Universal Studios and Walt Disney World have sucked business from lesser parks in general -- but it was the driving catalyst. Because the killer whales were so integral to the company SeaWorld did not respond well to the Blackfish controversy. Instead of quickly giving into the inevitable, the company dug its heels in, Washington Redskins-style , and refused to make any real changes.

That however finally changed in mid-March as the company finally announced plans to end its Orca program. On that news, shares in SeaWorld which closed February at $18.09 finished March at $21.06, a 16.4% gain, according to data provided by S&P Global Market Intelligence.

So what: SeaWorld won't be returning its current orcas to the wild, but it has stopped its breeding program and announced that this generation of killers whales will be the last under its care. The company also plans to stop using the whales in theatrical shows and intends to "introduce new, inspiring, natural orca encounters," according to a press release. These changes begin in its San Diego park in 2017, followed by San Antonio, and then Orlando in 2019.

"SeaWorld has introduced more than 400 million guests to orcas, and we are proud of our part in contributing to the human understanding of these animals," said CEO Joel Manby "As society's understanding of orcas continues to change, SeaWorld is changing with it. By making this the last generation of orcas in our care and reimagining how guests will encounter these beautiful animals, we are fulfilling our mission of providing visitors to our parks with experiences that matter."

Now what: Whether SeaWorld's business recovers depends upon whether the public accepts its very belated efforts to stop its perceived exploitation of orcas. That however is only a small piece of the battle as the theme park company has to do more than remove a reason for people not to visit. It also needs to offer one that makes it worthwhile to attend.

At a time when its two major rivals have Harry Potter attractions and are adding massive Star Wars lands respectively that is going to be a major challenge. This is however an important first step in the rebuild which at least puts SeaWorld back heading toward the possibility of competing.