Please ensure Javascript is enabled for purposes of website accessibility
Log In Help Join The Motley Fool
Free Article Join Over 1 Million Premium Members And Get More In-Depth Stock Guidance and Research
By Matthew DiLallo - Apr 5, 2016 at 11:05AM

With elevated leverage and tight coverage metrics, this MLP isn’t a safe bet.

Given the turmoil in the energy sector over the past year, investors are focusing more of their attention on the overall safety of their investments. For MLP investors, that means gauging whether or not a company's balance sheet, cash flow, and its distribution can weather not just the current storm, but an even worse storm in the future. Because of those concerns, I've put Summit Midstream Partners' (SMLP -5.58%) safety to the test. 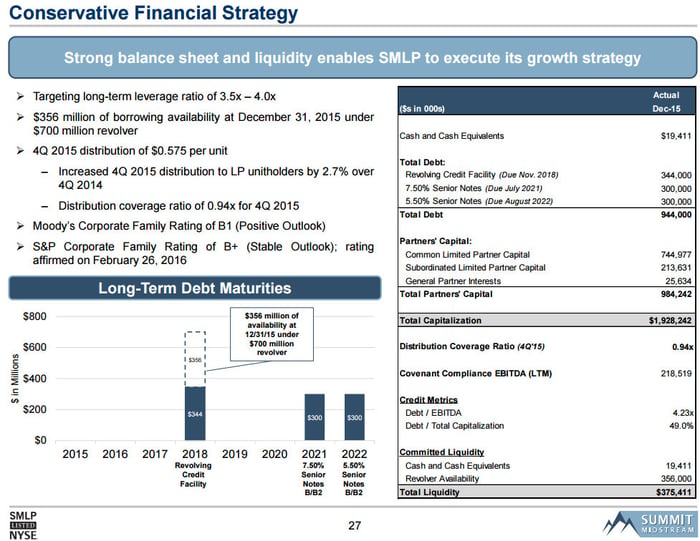 There are three metrics from that slide that I want to draw your attention: Summit's leverage ratio, its credit rating, and the availability under its revolver. As that slide notes, Summit Midstream Partners' current debt-to-EBITDA ratio is 4.23 times, which is elevated compared to its long-term target ratio of 3.5 to 4.0 times. However, it's not completely out of bounds given that midstream companies like Kinder Morgan (KMI 1.31%) are comfortable with leverage ratios north of 5.5 times. That said, a lower leverage ratio would be ideal given Summit's much smaller scale.

Kinder Morgan actually got itself into some hot water late last year with its credit rating agency after its leverage ratio spiked to 5.8 times. It warned that the company was at risk of losing its investment grade credit rating, which currently still sits at the very bottom of the investment grade range at BBB-/Baa3. It's a rating the company wanted to protect at all costs because it meant easier access to capital and lower rates. Summit Midstream Partners, on the other hand has a much lower B+/B1 rating, which is not only below investment grade but highly speculative according to rating agencies. It's a rating that emphatically suggests the company isn't as safe as a company of the scale and credit quality of Kinder Morgan.

Finally, as of the end of last year Summit Midstream had borrowed $344 million of the $700 million available to it under its revolving credit facility. Though, that facility was just up-sized to $1.25 billion in conjunction with its latest drop down transaction, wherein the company borrowed another $360 million of its capacity. That's a big chunk of its borrowing capacity that's been used up, with the company planning to continue to draw down its capacity over the next four years to fund its growth capex, estimating that it will have just $300 million in available liquidity by 2018. That leaves it with precious little liquidity should industry conditions worsen.

Cash flow and distribution safety
Turning to cash flow security, that's one area where Summit Midstream Partners shines. Currently, 98% of the company's revenue is fee-based, which is actually ahead of Kinder Morgan. That said, for 2016 Kinder Morgan has 91% of its cash flow coming from fee-based assets and 97% of its overall cash flow is either fee-based or hedged. Suffice it to say, both companies can boast of having very safe cash flow.

Investor takeaway
On the one hand, Summit Midstream Partners has a less-than-ideal balance sheet, with an elevated leverage ratio, low credit rating, and elevated borrowings on its credit facility. However, the company is buoyed by very safe cash flow and a coverage ratio that's projected to be well within the safe zone this year. Because of that, it's more of a lower mid-level MLP in terms of its safety right now. However, if all goes according to plan its safety should organically improve as its growth projects go into service and start growing its cash flow, which will not only boost its coverage ratio, but improve its leverage ratio, too. That just might be enough for its credit rating agencies to upgrade its credit rating to a less speculative level.