After a tough few years, M&T Bank is ready to move forward.

Over the past three years, M&T Bank (MTB 1.72%) has been handcuffed. The bank was forced by regulators to invest hundreds of millions of dollars into new compliance and technology infrastructure. The bank's acquisition of Hudson City Bancorp was put on ice. The stock faltered, trailing the S&P 500 by over 15% since year-end 2013.

Today, though, the Hudson City acquisition is complete. The compliance overhaul is done. Some analysts think the bank's stock is poised to resume its 30-year track record of outperformance. To make an assessment of our own, let's take a look at where the bank is today and where it's likely to go in the future.

Putting M&T Bank's financial performance in context
To provide context to M&T's current performance, we can compare its financial results to an industry average of large U.S. banks, as well as with two other large regional banks of comparable size, Regions Financial (RF 1.25%) and KeyCorp (KEY 0.48%). To assess each bank's performance, we will review their earnings, cost structures, and credit quality with four easy metrics.

A bank's return on assets is a useful tool to see how well a bank generates earnings from the overall size of its balance sheet, while return on equity adds in the impact of its leverage to optimize shareholder returns. The efficiency ratio shows the costs required to produce the bank's revenue. A lower ratio indicates a better cost structure and higher efficiency. Finally, the ratio of a bank's non-performing assets to its total assets informs investors to the likelihood of credit losses existing on the bank's books. Non-performing assets are severely past-due loans plus foreclosures. A higher ratio indicates problems on the bank's balance sheet that could potentially lead to loan losses in the future.

What do the numbers tell us about M&T Bank right now?
M&T's only major outperformance is in the efficiency ratio, which is not surprising for long term followers of this stock. M&T has long prided itself on strong credit culture and cost management through all phases of the economic cycle. With an efficiency ratio of 55.5%, M&T is among the most efficient large banks in the U.S.

Despite their similar numbers, M&T commands a higher valuation than these two peers in terms of their price-to-book values. 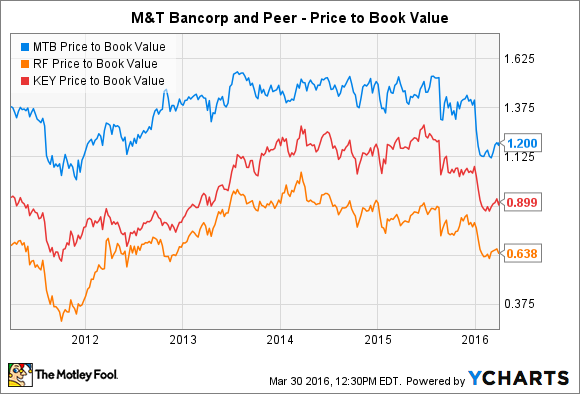 To me, however, the valuation premium here has more to do with what the market thinks M&T's stock will do next, as the bank moves past the regulatory issues and acquisition challenges of the past three years.

M&T's future success starts in the corner office.
Among the thousands of annual reports put forward by companies every year, a few CEOs stand out for their exceptional transparency, insight, and perspective. M&T Bank CEO Bob Wilmers is among these standouts through his letters to shareholders.

In this year's letter, Wilmers once again delivers. His letter lays out the continuing challenges facing all banks today and how M&T Bank is addressing those challenges to succeed over the long term. His core message is one of proactive risk management and vigilant cost discipline. To me, his letter is a powerful indication of strong performance to come from the bank.

Considering the bank's recent performance, he says, "Upon reflection, our financial performance and condition in 2015 merit no small measure of pride. Considering the environment, our businesses have performed remarkably well."

I agree. M&T's numbers are not earth-shattering, but do impress in consideration of the extra, nine-figure regulatory costs over the past few years.

And yet, in a display of impressive self-awareness, Wilmers goes on to recognize that many of the bank's challenges have been self-inflicted. He says:

It is in this context, with a sense of humility, that we say it should not have required a reminder from our regulators that stronger systems, programs and infrastructure were needed for a bank of our current size and complexity. We fell behind in building our risk management processes and have come to learn -- the hard way -- that the task of catching up is far more costly than simply keeping pace. This is a lesson that we have embraced and will not readily forget.

So how will Wilmers and M&T Bank move forward in today's banking environment? By refocusing on the core principles that have driven the bank's success over the past 30 years. Wilmers says that the recent past "was an arduous journey, one that validated the need for those investments as well as extraordinary regulatory compliance costs, while rearming that scale, efficiency and credit discipline remain as competitive advantages." [emphasis added].

Is now the time to buy M&T Bank stock?
The past few years have been transformative for M&T. The bank completely overhauled its technology infrastructure and compliance programs. It's invested hundreds of millions of dollars into these projects, laying the foundation for what should be decades of growth. The bank finally received approval and closed its purchase of Hudson City Bancorp, a key strategic win even after more than three years of regulatory limbo. More important still, management has acknowledged its mistakes and convincingly moved to correct them now and for the future.

The bank's financial performance over this time was, in consideration of this environment, impressive. It stands to reason that going forward, the bank will be able to build on that performance to reach even new heights, particularly with a CEO like Bob Wilmers leading the charge.

For investors interested in a bank stock to buy and hold over the long term, now looks like an opportune time to take a very close look at M&T Bank.