Please ensure Javascript is enabled for purposes of website accessibility
Log In Help Join The Motley Fool
Free Article Join Over 1 Million Premium Members And Get More In-Depth Stock Guidance and Research
By Daniel B. Kline - Apr 6, 2016 at 9:20AM

The company has to shed its pervasive reputation as a business and job-hunting version of Facebook.

LinkedIn (LNKD.DL) lives forever under the shadow of Facebook (FB 1.83%).

That's both a curse and a blessing for the social media service, which most people refer to as a business version of Mark Zuckerberg's company. In some ways, that description is fair since LinkedIn shares a lot with Facebook -- at least when it comes to how people interact with it.

It is a social network, and people do post status updates and interact with people they know, albeit in a fashion loosely tied to their professional rather than personal lives. But, LinkedIn is actually more than a specialized version of Facebook. It's potentially a window toward monetizing a user base through much more than advertising.

Ultimately, if the company can move beyond the way it was originally introduced to the public, it has the potential to become something other than a derivative product. If that happens, the company might be able to reverse its recent stock slide. 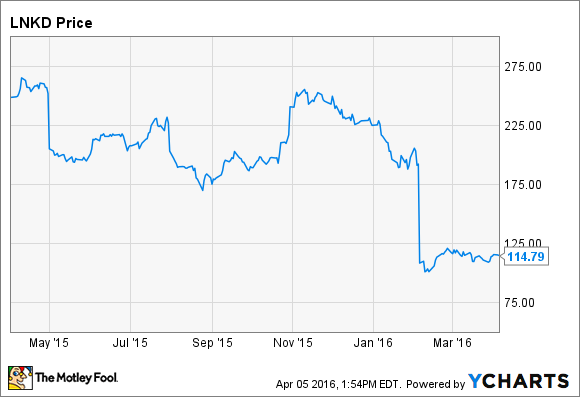 LinkedIn is about jobs
In 2015, LinkedIn focused on improving revenue in a number of core areas, but the most important of those may be its Talent Solutions segment. This is the group that actively finds good candidates for employers. In Q4, the division grew by 45% year over year to $535 million and increased 41% year over year to $1.8 billion in 2015.

Those are good numbers, but continuing to help employers find the right people, and members find jobs, is key to the company's long-term growth. People are generally not members of LinkedIn for fun, or to keep in touch with old friends -- they can do those things on Facebook.

Instead, they are there to find a job, advance their career, or find an employee. Making that experience pleasant and valuable for both the hiring company and the wannabe employee offers continued revenue opportunity for the site.

Do more training and certifying
Put that you are an SEO expert in your LinkedIn profile, and there's a good chance you will receive unsolicited job interest. The problem is, many of the most in-demand skills for employers looking at LinkedIn are not tied to traditional degrees. That makes it hard for companies to know if they are interviewing a kid who has a robust social media presence, or one who is actually a social media expert.

LinkedIn could solve that by offering course work, perhaps in conjunction with well-known educational institutions that both train and certify job seekers. This is a growing opportunity in the technology world, where the demand for developers means some companies will be willing to hire qualified candidates who did not follow traditional paths.

If the social media site can help employees gain (or prove they have) the skills an employer wants, then it would be providing a real service. In that case, it could charge for training, placement, certification, and matching candidates with hiring companies. In some cases, it could get paid on both ends of the transaction -- finding an individual a job and delivering the right candidate to the employer.

Make Premium worth more
At various points, years ago, when I was job hunting or considering it, I joined LinkedIn Premium mostly because it seemed like someone looking for work in my fields should be a member. During the period I was a member, other than having my resume put at the top of the pile in a few situations where I applied for a job, the service had little value.

That doesn't mean it's not valuable to everyone. Clearly some people like it, since revenue for the company's premium subscriptions increased 19% year over year in the fourth quarter to $144 million, and increased 22% year over year to $532 million in 2015. Still, if the company made membership more valuable, LinkedIn could make those numbers look small.

This could involve adding membership tiers, and perhaps even selling an ultra-premium membership with concierge-like services. One of the frustrations of any job search is that it can often involve sending resumes and never hearing anything back. If LinkedIn could use its premium services to minimize that pain, it could charge a high-end price.

Premium could expand to live events, one-on-one counseling, resume services, and all sorts of other things the company touches on, but could greatly expand. Ideally, and it's really true for all three of these ways the company could improve its fortunes, LinkedIn needs to continue moving beyond being a social media site and become more fully a service company.