Please ensure Javascript is enabled for purposes of website accessibility
Log In Help Join The Motley Fool
Free Article Join Over 1 Million Premium Members And Get More In-Depth Stock Guidance and Research
By Tyler Crowe - Apr 6, 2016 at 10:05AM

McDermott International has been racking up the contract awards over the past several months, and another bid win in March helped send shares soaring

What: Shares of McDermott International (MDR) climbed 23.9% in March. The largest reason for the big gain was on March 3rd after the announcement that it had secured another engineering, procurement, construction, and installation (EPCI) contract for an upstream oil and gas producer in the Middle East.

So what: Unlike so many other oil and gas service providers that have seen their revenue backlogs decrease, McDermott has been one of the few that has been consistently adding to its project pipeline. At the end of 2015, the company had increased its backlog from the year prior by $630 million to $4.3 billion, and the company has continued on its streak of contract wins this past month. Typically, McDermott doesn't immediately disclose the full contract value of an awarded project, but this is the fourth major project that McDermott has won so far this year.

McDermott can attribute a large portion of its recent success to its operations in the Middle East. While many integrated and independent oil and gas companies have been reeling from low prices, many of the national oil companies in the Gulf States have still been generating enough cash to reinvest in projects that have been related to field maintenance and optimization.

Now what: Even at a time when capital spending around the world is drying up, it's promising for investors that McDermott continues to rack up project awards. The company had about $19.6 billion worth of submitted bids outstanding at the end of the 4th quarter in 2015, so there is still ample opportunity out there to keep growing that backlog through this rough part of the cycle.

The one discouraging aspect is that despite these contract awards, the company is still generating losses and only expects to break even for the fiscal year 2016. If the company can cut costs as much as it claims it can in its recent investor presentation, then beyond 2016 the company should be able to start generating some much more promising profits. Personally, I would probably want to see some tangible results before making an investment. After all, even when we account for March's stock price jump, the company's shares are still down more than 85% over the past 5 years. 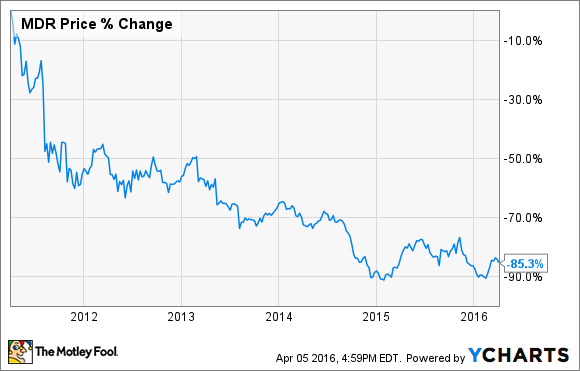