With its first-quarter deliveries already reported, investors are turning to electric-car maker Tesla Motors' (TSLA -6.92%) second quarter deliveries. In particular, investors will be interested in how many Model X SUVs the company can produce and deliver this quarter. Here's a close look at what we know about Tesla's Model X production, and how many Model X units the company could deliver this quarter.

Supplier issues during Q1 suppressed production and resulted in lower-than-anticipated deliveries for the quarter, Tesla said. The company expected to deliver 16,000 vehicles during Q1, but instead delivered 14,820 vehicles.

On a positive note, however, the company noted this week it was building as as many as 750 Model X every week by the last full week of in Q1. If Tesla were to keep up this production rate, Model X deliveries may be about to soar.

Here's how this level of production could impact Model X deliveries during Q2 if it is sustained this rate throughout the quarter: 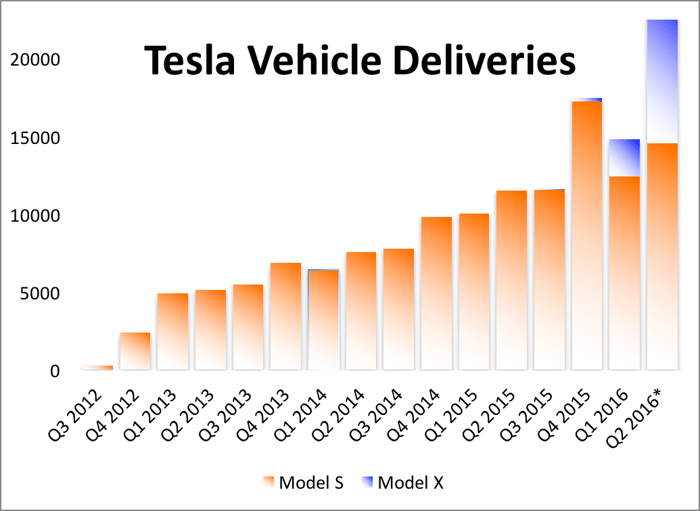 Q2 estimate based on Tesla management's reference to order rates for Model S, and weekly production for Model X achieved in the last week of Q1. Chart source: Author.

At 750 Model X per week during Q2, the company could produce about 9,700 units, representing about 40% of the company's expected deliveries during the quarter. If this build rate were sustained throughout the quarter, the company could potentially deliver this many units, too, since it exited Q1 already building Model X units at this rate.

Further supporting the notion that Tesla could produce and deliver far more Model X units in Q2 is a comment from Tesla CEO Elon Musk during Tesla's fourth-quarter earnings call that he expected Tesla to achieve a peak production rate of 1,000 Model X vehicles per week at some point during Q2.

Investors will likely get a glimpse into the company's expected Model X deliveries for Q2 when the company reports first-quarter financial results and provides guidance for Q2. While Tesla is unlikely to break out its guidance into vehicle models, total expected vehicle deliveries for Q2 will provide insight into the approximate level of Model X deliveries expected. Tesla is likely to report first-quarter financial results either toward the end of this month or at the beginning of next month.

For the full-year, Tesla expects to deliver 80,000 to 90,000 Model S and Model X vehicles combined, representing about 68% year-over-year growth compared to 2015's vehicle sales. Once Model X production ramps up, Tesla expects Model X demand, production, and deliveries to rival Model S deliveries. At the rate Tesla is ramping up its production, it's looking like quarterly Model X deliveries will catch up to Model S before the end of the year.