Wall Street has hammered offshore rig stocks over the past couple years. Perhaps last month was a sign that it's looking at the prospects of individual companies rather than just the sector.

What: Shares of offshore rig contractor Rowan Companies (RDC) rose close to 21% in March thanks to rising oil prices and carrying some good vibes after posting a better-than-expected earnings result at the end of February

So what: Offshore rig contractors have not received a lot of love from Wall Street over the past several years. As the big-spending oil and gas producers have been slowing the pace of deepwater oil and gas projects, rig companies have been left with large fleets of rigs without work. To grasp how bad the market for offshore rig companies has been, consider this: Over the past five years, Rowan Companies shares are down a whopping  63%, and it is one of the best-performing stocks among its peers! 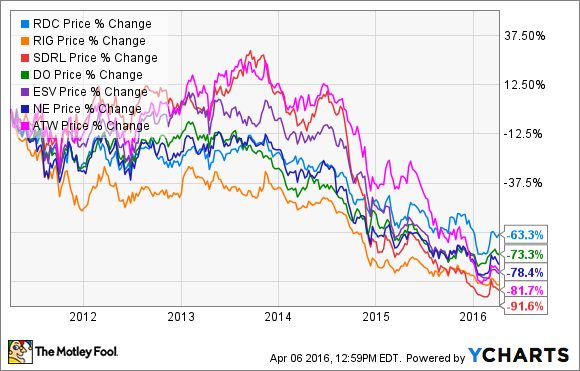 One of the reasons that investors are slightly less pessimistic about Rowan as of late was its recent earnings report. While so many other companies have seen large revenue declines as rigs come off contract, Rowan's fourth-quarter revenue was only down 4% from the same quarter last year, and the company's net income of $0.95 per share for the quarter helped to pad its cash hoard. Building cash stores in today's market is huge since it's likely going to take a while before demand for offshore rigs increases again.

Another reason Rowan is getting a little more love lately is that the company only has three of its rigs slated to come off contract in 2016, and those three are older jack-up rigs that command much lower rates than its newer, higher specification rigs. It also helps that it has been contracting rigs to Saudi Aramco, which is in a much better financial position to renew contracts when they come due than many other oil companies out there.

Now what: The market for offshore oil and gas rigs is absolutely brutal right now, and there aren't a whole lot of reasons to be optimistic for quite some time. Before rigs demand picks up, oil producers are going to have to replenish their balance sheets and produce greater cash flows. Of the rig companies, though, Rowan is in a bit of an enviable position. Its strong contract coverage and growing cash reserves suggest the company will be in decent shape when the market does turn, and could be in a position to make some moves when more financially stressed companies in the space struggle to meet financial obligations.