The payment processor posted a solid quarter, and it increased its guidance for the full year.

What: Shares of payment processor Global Payments (GPN 0.26%) jumped on Wednesday following the company's fiscal third-quarter earnings report. Global Payments beat analyst estimates for both revenue and earnings, and its guidance called for double-digit EPS growth in fiscal 2016. The stock was up as much as 10% on Wednesday, settling to an 8.8% gain by 3:30 p.m. ET.

Non-GAAP EPS, what the company calls cash EPS, came in at $0.70, up 17% year over year, and $0.03 better than analyst expectations. Currency had a major negative effect on earnings, with cash EPS growing 28% on a constant currency basis. Turning to GAAP numbers, EPS was $0.53, up from $0.46 during the prior-year period.

Global Payments also raised its guidance for fiscal 2016 due to its strong performance during the third quarter. Constant currency adjusted net revenue is expected to grow toward the upper end of a 10%-12% range, while cash earnings are expected between $2.93 and $3.00 per share, a 16%-19% increase.

Now what: Global Payments had a solid quarter, and after a few months of languishing, the stock is once again near its 52-week high. Shares of Global Payments have surged over the past three years, more than tripling in that time. 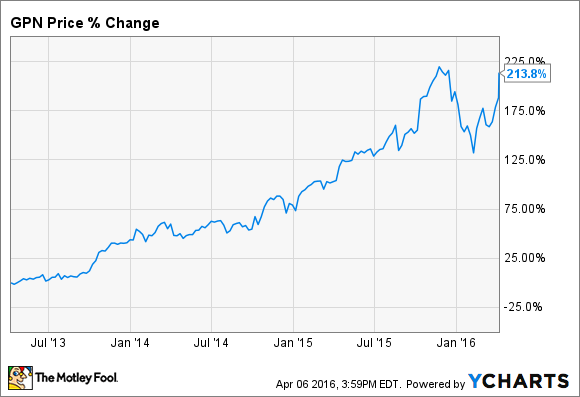 While Global Payments' results weren't too far above analyst expectations, a small earnings beat and improved guidance was enough to send the stock soaring.