Is it meaningful, or just movement? 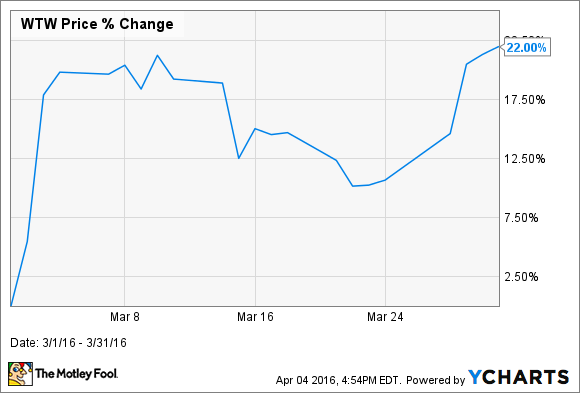 What: Shares of weight loss and maintenance company Weight Watchers International (WW -6.51%) surged 22% in March, according to data provided by S&P Global Market Intelligence, as shares of the company continue its volatile run in wake of the Oprah Winfrey partnership announcement.

So what: Shares of the company continue to be a battle-ground stock. Investor sentiment on the company is mostly likely dependent upon when the shares were purchased. Weight Watchers shares did advance 22% last month but are down year to date nearly 40%. However, if you were lucky to purchase in October, before Winfrey's announcement, you'd be sitting on gains in access of 100%.

Last month, a combination of positive press from Winfrey in her O Magazine and the discovery two directors had purchased a combined total of 113,125 shares, both significantly increasing their total holdings, led to gains and offset a somewhat disappointing annual report in the beginning of the month.

Now what: In the long run, the company's fundamental performance will drive investment returns, not flashy promotional deals or insider purchases. However, it doesn't seem Weight Watchers has had a great deal of success in that department. Weight Watchers revenue dropped a massive 21.3% in fiscal 2015 over the prior year's result, when it reported in early March.

This is not a one-off year, however. The company has seen its top line drop every year since 2012, with last year's net revenue total of $1.16 billion being 36% lower than the $1.84 billion revenue haul the company produced in 2012. Last year's earnings-per-share total of $0.54 is nearly 90% lower than the $4.23 in earnings Weight Watchers provided investors in 2012. As a result, shares have tremendously lagged the market over the past five years by falling 80%, versus S&P 500 returns of 55%

It's still too early for investors to say whether Oprah Winfrey will be able to reverse the company's poor performance, but the company appears hopeful. In the annual report, the company credited the partnership with Winfrey for increased recruitment in the fourth fiscal quarter. It will be interesting to see if this trend continues.