What: Shares of Contango Oil & Gas (NYSEMKT:MCF) enjoyed a remarkable rise in March: 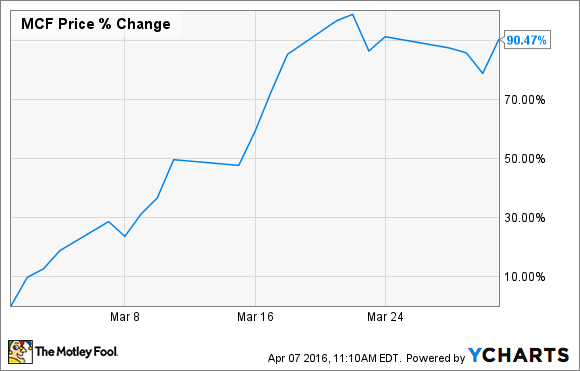 Fueling that rise was an improvement in the oil and gas market, as well as the company's fourth-quarter earnings and outlook for 2016.

That said, commodity prices weren't the only reason Contango Oil & Gas' stock nearly doubled last month. Investors were also pleased with its fourth-quarter earnings report and its 2016 outlook. Earnings is, perhaps, not the right word to use because the company didn't have any last quarter, instead turning in a net loss of $111.3 million, or $5.85 per share. Fueling that loss was a $48.2 million non-cash impairment charge, a $30 million non-cash pre-tax loss on an equity investment, and $5.6 million relating to the forfeited deposit from an unsuccessful acquisition. Even if these one-time items are adjusted, the company still lost $41.6 million last quarter.

Having said that, investors were more focused on the company's outlook than what it did last quarter. In particular, they liked the fact that the company has decided to limit its capital programs in 2016 to very limited drilling and certain lease extensions, with the company using any excess cash flow to pay down its credit facility. As of the end of last quarter the company had borrowed $115.4 million of the $190 million it had available on its credit facility. That is something it needs to monitor because that facility will be redetermined on May 1st. Given the possibility that its banks could lower its borrowing base, Contango Oil & Gas really can't afford to drill until it has more long-term certainty on cash flow and credit availability.

A growing number of smaller oil and gas producers are following this same path in 2016. For example, Unit Corp (NYSE:UNT) planned to cease all drilling activities by the end of the first quarter. Instead, Unit Corp would divert its cash resources to lower its debt, with the goal of ending 2016 with less debt than it started. Unit plans to reevaluate conditions later in the year and could resume drilling activity should industry conditions warrant it. Contango is taking that same approach, with the company noting that it would "resume an active drilling program" if commodity prices improve this year.

Now what: Right now oil and gas prices remain too weak for Contango Oil and Gas to do much of anything but pay down debt. Its hope is that oil prices improve so that it can get back to work later this year. That said, it's still anyone's guess whether or not that will actually happen.