Tesla Motors (TSLA 1.66%) has announced that its highly anticipated Model 3 has now garnered 325,000 reservations in the week following the unveiling. The company estimates the total value of these reservations at $14 billion. While that's purely hypothetical since it assumes a 100% order conversion rate, the numbers are still impressive nonetheless. That's about 50,000 more reservations than the 276,000 reservations that Elon Musk confirmed on Saturday.

And yet, shares are down today. What gives?

The yen is getting stronger
The Japanese yen has been getting a lot stronger lately, and today hit a 17-month high against the U.S. dollar. While the euro tends to have more of an impact on the broader U.S. economy, the yen represents company-specific risk for Tesla. For context, here is how the yen has strengthened against the dollar over the past year. 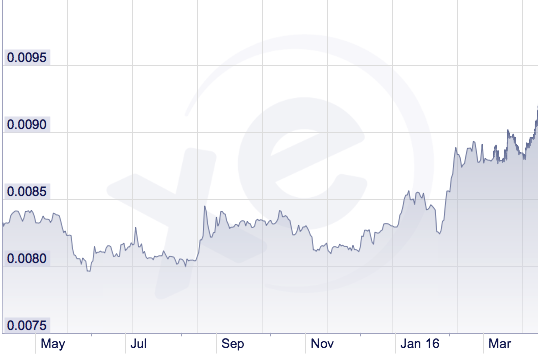 The reason how a stronger yen might be bad news for the electric automaker is that its most important component purchases -- battery cells -- are denominated in Japanese yen. Tesla has long partnered with Panasonic as its sole battery supplier.

The company specifically notes the yen as a notable risk factor in its 10-K since lithium-ion cells are easily the most important ingredient in its products, warning of the potential impact of "fluctuations in the value of the Japanese yen against the U.S. dollar as our battery cell purchases are currently denominated in Japanese yen." A strengthening yen could translate into higher component costs, and put pressure on margins if the trend continues.

Like most companies that face foreign exchange risk, particularly around notable suppliers, Tesla uses currency derivatives to hedge this risk as best it can. Tesla started a hedging program last November using currency forwards that are designated as cash flow hedges, all of which have maturity dates of a year or less. But hedging can never fully offset risk, and extreme currency fluctuations can still impact Tesla's results.

What about the won?
Tesla also confirmed late last year that it inked a deal with South Korea's LG Chem to provide battery upgrades for the Roadster, which is no longer in production. LG Chem is also General Motors' main partner with co-developing the Chevy Bolt, producing both the battery packs and electric drivetrain.

This comes shortly after Reuters reported that LG Display would be supplying the 15-inch console displays in the Model 3. So it seems that Tesla may be broadly building its relationship with parent company LG Electronics. If Tesla were to theoretically shift to a different battery cell supplier, it could reduce its exposure to the yen (while increasing its exposure to the South Korean won). However, this is unlikely, since Panasonic has always been Tesla's main flame, and is a key partner with building the Gigafactory.

Tesla will be purchasing lithium from a mine in Nevada near the Gigafactory, as well as from a mine in Northern Mexico. Chile is the world's largest producer of lithium, and Tesla has reportedly met with Chilean government officials, too. In any event, the net result is that Tesla's exposure to the yen should decrease over time.