What: After a rough start to the year, WPX Energy (WPX) enjoyed a bounce-back last month. Its shares soared more than 60% after oil prices and its access to credit both improved, which pushed it into positive territory for the year.

So what: Oil enjoyed its best rally in more than a year, surging 14% in March to over $40 a barrel at one point before closing in the upper $30s. This is an important level for WPX Energy because the wells it drills in the Permian Basin currently earn at least a meager economic return at a $40 oil price: 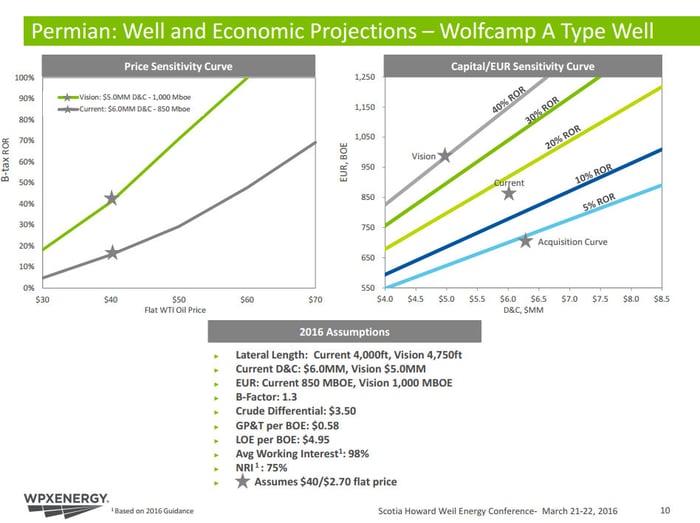 Aside from the oil price rally, the other important driver last month was the company's banks. They committed to lend WPX Energy $1.2 billion under its credit facility, which is noteworthy because this commitment is coming at a time when many oil and gas companies expect to see their credit cut. In fact, rival Whiting Petroleum (WLL) expects to see its credit line cut by more than $1 billion when its banks redetermine it next month. WPX Energy, on the other hand, was able to secure strong access to credit despite weaker oil prices and the fact that it's selling its Piceance subsidiary. This commitment level gives the company "clarity" according to CFO Kevin Vann and is a "validation of the positive financial health of the company."

Clarity is important because it enables the company to have the funding it needs if oil takes another leg down. It's an important advantage because clarity of funding is something Whiting Petroleum lacks at the moment, with its CEO guessing that its credit facility will be cut by $1.2 billion, leaving it with roughly $1.5 billion in liquidity. However, he did say a cut of 30% is not out of the question for Whiting, which would leave it with just $800 million of liquidity. It's that lack of clarity on liquidity, combined with very weak oil prices, that forced Whiting Petroleum to cut its capex budget by 80% over last year to just $500 million, subsequently causing it to suspend its fracking operations. Such a dramatic cut wasn't necessary at WPX Energy, which only cut spending 40% to $395 million.

Now what: With ample liquidity and an improvement in oil prices, WPX Energy is in a solid position at the moment. That said, the company really does need oil to move back over that $40 a barrel mark and stay there in order to deliver worthwhile drilling returns. If it doesn't, it could run the risk of drilling itself into a similar situation as Whiting Petroleum, which spent too much money in the past to grow and is now seeing its liquidity starting to running dry.