Even disappointing news from the FDA couldn't hold back shares from rallying this month.

What: Shares of Opko Health (OPK 3.34%), a mid-cap biopharmaceutical and diagnostics company, had a roller-coaster month but ended up gaining more than 11% during March, according to data from S&P Global Market Intelligence. 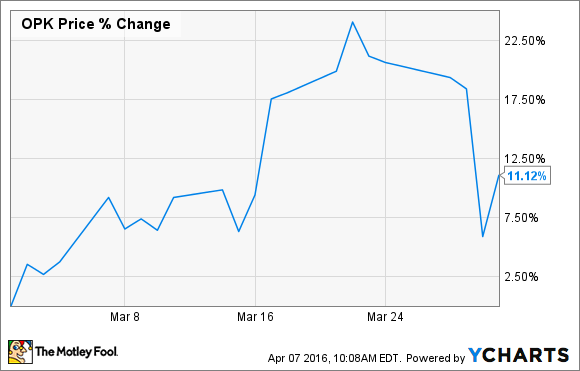 So what: The company had plenty of news to share with investors during the month that caused its stock to both skyrocket and plunge.

On the plus side, Opko Health announced that the European Association of Urology Prostate Cancer Guidelines Panel has recommended including the company's 4Kscore as part of their 2016 guidelines. The panel said that Opko's 4Kscore test offers benefits over the traditional PSA test that make it a better choice for detecting high-grade cancer.

In a separate announcement, it said it has dosed the first patients with its experimental drug MOD-6031. The drug is aimed at helping with patients with type II diabetes lose weight and improve their glycemic control.

However, the big news out of Opko this month wasn't quite as rosy as its other disclosures. It had received a letter from the Food and Drug Administration that stated that a field inspection at one of its third-party contract manufacturers had found deficiencies. For that reason, the FDA felt that it could not issue an approval for the company's hyperparathyroidism treatment Rayaldee on its scheduled PDUFA date of March 30.

Opko was quick to point out that the FDA didn't have any specific safety, efficacy, or labeling issues directed at Rayaldee, and it still believes that the drug will eventually win approval. Opko is actively working with the manufacturer to address the FDA's issues, but did not yet have an updated timeline to share with investors.

Shares did fall a bit on the day that news of the delay hit the wire, but it was a bit of a surprise to me that traders didn't react more harshly. Perhaps the markets felt that management did a solid job of explaining the reason for the delay and expressed enough confidence in Rayaldee's eventual approval.

Now what: Rayaldee is a very important drug for Opko Health's future. The market for hyperparathyroidism treatments is estimated to be about $12 billion in annual sales. Since Rayaldee offers a handful of clinical advantages over other drugs in its category, it could be a huge winner for Opko.

Thankfully, Rayaldee isn't the company's only iron on the fire. Varubi -- which treats nausea from chemotherapy -- is also poised to ramp up sales this year. The drug is being marketed by Opko's partner Tesaro, and the two believe that it could reach blockbusters status. If so, Opko could be eligible to receive another $95 million in milestone payments and a double-digit royalty.

Only time will tell if Rayaldee will indeed win approval, but in the meantime Opko CEO Phillip Frost has continued to gobble up shares on the open market. Perhaps its not the worst idea to follow his move and pick up a few shares before news of an approval breaks.